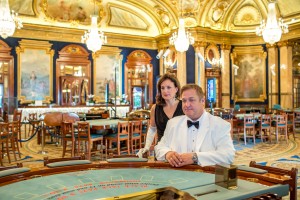 He not only shook my hand, but greeted me warmly and stopped to have a few words with me. No, this was not a Monaco tour guide, but rather, His Serene Highness Prince Albert II, himself! The son of the late Princess Grace Kelly and now the Ruling Monarch of the glamorous principality, population 35,000, only 8,000 of which are native Monegasque. Monaco is wedged into a two-square mile outcrop along the Mediterranean between Italy and France. I happened to be in the right place at the right time, but locals tell me the Prince, his wife Princess Charlene, and his two Princess-sisters Stephanie and Caroline are ever-present, approachable, and beloved. What better ambassador for the globe’s most glamorous location than the Prince, one of the world’s wealthiest men, an Olympic Bobsledder, philanthropist, and adventurer who has reached both the North and South Poles? It was like meeting the “Mickey Mouse” of a sophisticated, adult Disney World. Mon Dieu! 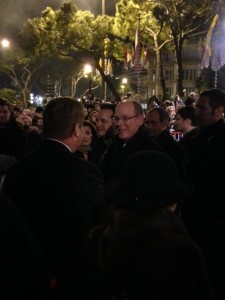 I was, admittedly, star-struck, and could only manage to embarrass myself by warbling out, “Your Highness, you have a nice place, here,” (which is a world class understatement).

Celebrity encounters will not surprise you because Monte Carlo, Monaco’s most glamorous district, feels like a movie set. Every person you lay eyes on in the lobby of the famed Hotel de Paris, for instance, is a person of intrigue…or they wouldn’t be there! Actor Sir Roger Moore, a Monaco resident who played James Bond, for instance, drops into the hotel’s Bar Americain occasionally. 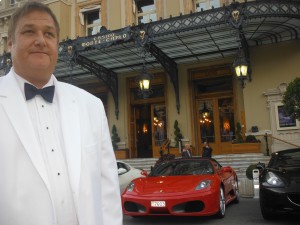 Sit outside the classic brasserie Café de Paris, which is directly on the street/track of the famed Monaco Grand Prix, and ogle their cars of choice: Ferrari, Rolls Royce, Lamborghini or Aston Martin, James Bond’s favorite car. In fact, a number of 007 films – most recently “Goldeneye” – were shot in Monte Carlo, mainly around the 150-year old Casino de Monte Carlo, which is more like an elaborate palace, including an opera house, than a gaming hall, adjacent to Hotel de Paris. 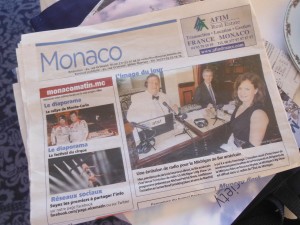 I played the dream part, for a weekend, living out SBM Resorts’ “Secret Agent Package.” I took Delta Airlines into Nice’s Cote d’Azur Airport, where a thrilling seven-minute helicopter flight along the sea launched the adventure. Feeling like a celebrity in my tuxedo that evening, I sat in the opulent, quiet casino ala 007 – with a vodka martini – shaken, not stirred – playing Baccarat under its’ crystal chandeliers. A mysterious gentleman next to me wagered as much as 15,000 Euro per hand, while I stayed in the shallow end of the betting pool! When I’d soaked up enough of the theatrics, I cashed in a 2,000 Euro chip and floated across the street to toast my victory with Bollinger Champagne at Jimmy’z, the velvet-roped, supermodel’s late-night dance club of choice. 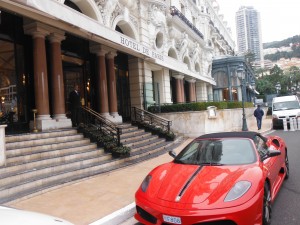 I cruised 20 miles along the Mediterranean to San Remo the next morning just because it sounded so cool to say, “I drove into Italy for lunch.”

Your dream too, mon ami, begins at www.MonteCarloResort.com 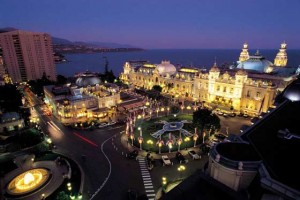