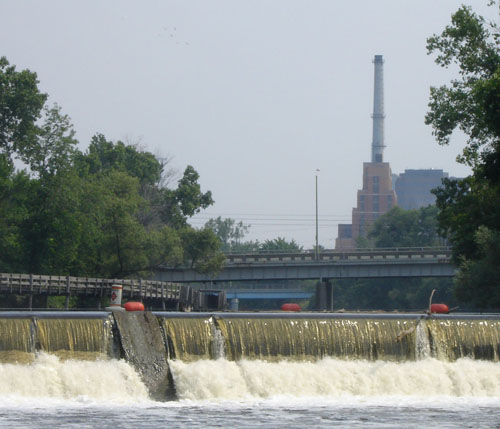 LANSING, MI – Most great cities have rivers, but Lansing’s river is grand, according to Pat Gillespie. And he’d like to give residents and tourists the grand tour.

Gillespie, the creative visionary who heads up the Gillespie Group, headed to the shoreline of the Grand River last week and climbed aboard a deck boat he’d chartered to show off Lansing by sea. Gillespie’s new idea? To create waterway and dinner cruises through the heart of Lansing. This exploratory evening sailing showed off the scenic, wooded views near the Potter Park Zoo; striking, urban scenes such as the Accident Fund building rising above the river; and culminated by going ashore in Old Town for some chic nightlife.

“I’d like to give more people to the opportunity to see how cool our city looks from the Grand River. You actually can spend an evening outside enjoying the river in Lansing,” insisted Gillespie, who cites San Antonio, Chicago, Columbus, Fort Lauderdale, and Jacksonville, FL as towns which have benefitted from making their inland waterways accessible. “Right now we have people living on the river and walking or running along the River Trail. The new State Police Headquarters, the Accident Fund Headquarters project, and the creation of the New City Market and Marketplace are examples of development on the river happening right now. I want our region to get a positive vibe by using the waterway we have because one trip down the river is an eye-opener.” 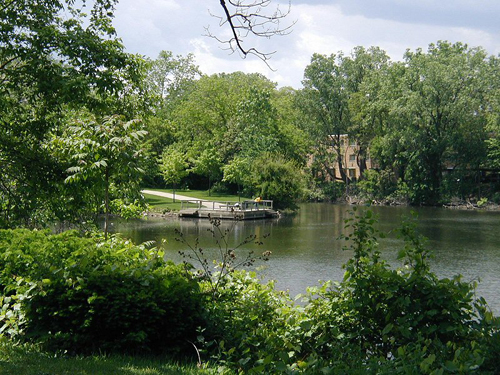 The boat trip immediately felt like an adventure – as if we were exploring an uncharted passage. The startled, curious looks we received from people walking along the River Trail revealed there must typically not be much pleasure cruising on the Grand River. MSU students, for instance, could theoretically kayak from campus on the Red Cedar River all the way to Old Town – and back – if they wished. Like us, they would be treated to heavily forested areas more like Northern Michigan than the State Capital.

Gillespie revealed points of interest as we floated down two different arms of the Grand River, with Captain Scotty Straner, of Pinckney’s Chain of Lakes Boat Tours, gliding under overpasses and train bridges.

“A County Zoo, a widely used children’s museum, a public theater group, historic automotive plants that once drove our state’s industry, a car museum, an operating coal plant, a decommissioned coal plant that is now being restored, a new $185-million-dollar corporate headquarters, and a $35-million-dollar office building getting ready to open,” said Gillespie, playing the role of an excitable Willie Wonka before showing off the site of his new City Market project right smack on the river. “We have the ability to dock at the first, true Lansing downtown – Old Town – and walk a short distance for nightlife and appetizers. And on the way you pass the unique Brenke Fish Ladder.”

Other passengers onboard said they enjoyed seeing Lansing above them at night with all of the lights and unique architecture. Some were amazed at seeing – for the first time – the riverfront facilities the Lansing Center offers. Other compared the experience to Chicago or Columbus. Some of the views along the river, obscured by trees, seemed to be begging to be opened up.

“The best part by far was the trip downtown and seeing just how close the downtown district and Old Town really are. It helped me understand the importance of pulling these two areas together,” said the Gillespie Group’s Rachel Michaud.

The cruise left many wondering why there isn’t some sort of dining facility or restaurant on the Grand River.

Gillespie is the sort of fellow who asks that very question, “Why not?” And he often answers it with action, and investment, instead of just theory.

“Wait and see. In 10 years, none of us will even recognize Lansing,” he said.

In September, Gillespie plans a week of informational cruises with media members, city officials, and potential investors to share his vision of enjoying Lansing from the water.

“The Grand River”
Originally printed in the Talk of the North