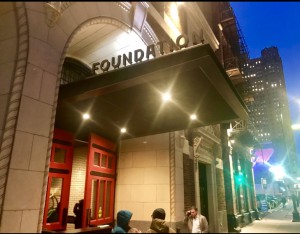 Rock group The Eagles sang about “Hotel California” and that hit songs lyric stated: “You can check out anytime you like, but you can never leave.”

Imagine, conversely, a hotel at which “you don’t even have to check in but you can always stay.”

That’s the unofficial motto of Detroit Foundation Hotel, one of the Motor City’s newest and most stylish lodging options.

“We want people to be able to come and hang out whether they’re staying in the hotel or not. Just be there,” insists General Manager Bob Lambert. “At Detroit Foundation Hotel our lobby and lounge is an extension of our restaurant and bar. It’s a place to connect and be seen. We love for people to come in and work on their laptops. They don’t have to buy anything. Just being a part of what we’re doing makes it a lot of fun.”

It is obvious Lambert means what he says. Step into The Foundation Hotel’s open lobby, bar, and vintage Apparatus Room restaurant and you will see one, large, high-ceilinged, great room with big windows, lots of natural light, an indoor/outdoor patio. There are large communal tables with power outlets and wireless internet and comfortable chairs surrounding coffee tables.

Lambert has also recruited a staff of enthusiastic valets who keep things hopping out front and provide guests with rides to concerts and sporting events, like this weekend’s Movement electronic music festival in Hart Plaza.

“Our group of associates is so proud of what we’re contributing so right away when you walk in the door you’re going to be greeted and welcomed into our space. You’ll see we have some retail space and the art, items and apparel we carry has a Detroit theme. We want to provide local makers an opportunity to sell their goods,” explains Lambert. Guestroom mini bars also offer Michigan-made spirits, snacks, treats and even a “Foundation Smoke” candle – one of many crafty references to the building’s history. “It was originally Detroit’s fire headquarters – an iconic, 1929 building with big, red fire truck doors that are impactful.”

Chicago-based Aparium Hotel Group bought the building in 2013 and, after delicate repurposing and renovations Lambert reopened the hotel, with all its urban, industrial chic, in 2017. “We brought all the modern conveniences into the building but we also respected and preserved the history that was there. It’s been an amazing thing.”

Lambert also created a storefront radio/podcast studio visible from the sidewalk – a definite big city, old school move. That studio and The Foundation Hotel’s corner location are right across the street from busy Cobo Center.

“We are a great spot to stop in and hang out instead of just coming into the city, going to an event at Cobo, and leaving,” says Lambert, who considers the hotel and its team of staffers to be ambassadors in Detroit’s post-bankruptcy comeback.

“I wholeheartedly believe in Detroit’s renaissance and the Foundation’s contribution is about helping propel the momentum. What I see happening downtown is amazing, and at a pace that is incredible. I am just so privileged to be a part of what is happening downtown.”