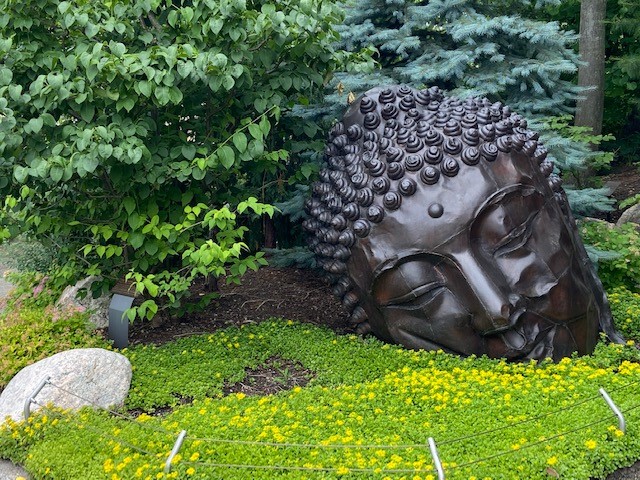 Frederik Meijer Gardens and Sculpture Park in Grand Rapids is a walk full of surprises. (Photo by: Harrison Shiels)

With gyms, health clubs, YMCA’s, the MAC and more closed during the pandemic quarantine, good old-fashioned walking, for many, became the exercise of necessity. I employed technology to track my steps by pocketing my I-Phone, with its built-in pedometer, while strolling and sometimes staggering over miles of streets, sidewalks, soil and snow. During the frigid early winter, I had improvised by marching through the middle of Meridian Mall after work and even around the inside perimeter of Firekeepers cozy casino. Then came Covid…which made walking outside my only option, so I bundled up and bounded out.

Seeking serenity, I was introduced to the elevated panoramas and riverside route of Meridian Township’s Harris Nature Center Trails by Okemite Margaret Trimer; while Pico Ball and her husband Mike, of East Lansing, showed me the straight-shot scenery of the Inter-Urban Pathway connecting the Marsh Rd train overpass with my old Bear Lakes neighborhood near the roundabout at Park Lake and Bircham roads. I found the trails at Lake Lansing North Park to be my own, personal “Camp David” because of its miles of fully secluded, winding ways through woods and wetlands that seemed new with each wandering walk. Lake Lansing North’s trails also have a small “back entrance” in the adjacent Trails of Lake Lansing neighborhood which is a very visually pleasing subdivision because every neighbor seems to take great pride in their lovely landscaping.

I know I am late to the party on all of this, but my seeking of steps also led me finally to Frederik Meijer Gardens and Sculpture Park on the east side of Grand Rapids. It took three hours of meandering to cover most of the park’s 158 acres of meadows mixed with masterworks: 200 striking sculptures blended in with the flora, fauna, woodlands and wetlands. The pieces, some giant and others subtle, are open to interpretation and worth pondering even when one keeps walking the wide, paved trails.

There is education mixed in with the beauty and fun since kids and adults can enjoy open-air science activities including a geographical Great Lakes pool display in the Children’s Garden. A variety of folks – from families to first dates – will enjoy the ornate, eight-acre Helen and Richard DeVos Japanese Garden with its traditional tea house and bonsai trees and Buddha bust beyond which they will find a farm: a 1930’s-era Michigan barn, windmill, and farmhouse overseeing heirloom vegetables, livestock sculptures, and even a timeless outhouse…which thankfully, whether by design or not, is within whiff of an herb garden.

If it should rain there are intriguing indoor exhibits, as well, including spooky carnivorous plants such as the Venus Flytrap and chandeliers by Dale Chihuly.

It’s all a “Disney-esque” experience and as such the entire property is also viewable via a shuttle tram ride for those who prefer to a garden glide. The Frederik Meijer Gardens, natural but amusing, are easily accessible almost immediately to the north of I-96’s Beltway exit and at MeijerGardens.org

Contact Michael Patrick Shiels at MShiels@aol.com His radio show can be heard weekdays from 9-noon on WJIM AM 1240 and anytime at MiBigShow.com or the Michigan’s Big Show app