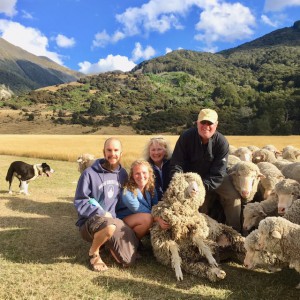 Matt Rhodes recently shared a taste of New Zealand sauvignon blanc and a magnum of memories with me at his Dusty’s Cellar wine shop in Okemos. He’d just returned from a family adventure to Christchurch, Queenstown and more remote parts of faraway New Zealand’s south island, where vintners specialize in producing the white wine we sipped…plus pinot noir.

“We always keep a New Zealand wine by the glass available in our Wine Bar restaurant and Tap Room pub. Oyster Bay is probably the most common and Villa Maria makes some nice wines, too” said Rhodes, who sometimes features bottles of those brands in his monthly “Six for $60” special at Dusty’s Cellar. He tried new wines every night while on the trip and even discovered an independent wine shop he described as the coolest he’s ever seen. “It was outside Queenstown and they served 80 different New Zealand wines by the glass. We tasted a good dozen or so of them because they had comfortable leather couches and cheese trays.”

Rhodes and his wife, Caryn, winged to Los Angeles to catch a 14.5-hour Delta Airlines flight to Australia and then connected to New Zealand. Their daughter Kate Rhodes, a Michigan State University graduate, had been living there for eight months.

“New Zealand has a cool visa deal where if you are under age 30 you can go there for a year – no questions asked – and you can work in agriculture, tourism or for the government. So Kate worked at Wilderness Lodge in Arthur’s Pass waiting tables, working the front desk and cleaning rooms. She was paid well and provided with room and board,” explained Rhodes. “It’s a really nice resort about an hour-and-a-half out of Christchurch on thousands of acres with walking trails. We got to go out to their working sheep farm and see the dog round up the sheep to be sheared.”

“It’s flat out stunning. There are rain forests, glaciers, and fjords. Even photos can’t convey how blue the water is. Milford Sound was a highlight and we took a jet boat ride out of Wanaka speeding over glacier-fed rivers,” said Rhodes.

“You’re always trying to go around, through or over them. We rode a steep cable car from Queenstown up to the top of Bob’s Peak and Mount Cook was a highlight. And we went to historic Arrowtown – a gold rush town in the 1860’s.”

On a somber note, Rhodes and his family, when in Christchurch, did view the many flowers placed along the fence outside one of the mosques in remembrance of the victims of the recent terrorist shootings.

Kate is making her way back to Michigan. But on her way, with the money she saved working for a year under New Zealand’s tourism visa, she’ll stop in Vietnam, Indonesia, and India. Meanwhile Matt and Caryn’s son young Danny may soon travel for a work opportunity as a deejay at a high profile, luxury fashion event on Mykonos in Greece.