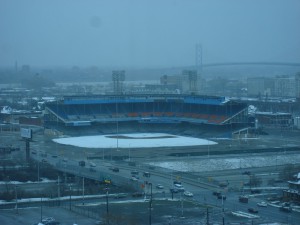 A half-standing Tiger Stadium haunted downtown Detroit during the NCAA Final Four at Ford Field in 2009. (Photo by Harrison Shiels)

As the Detroit Tigers begin the 2017 Major League baseball season at the colorful Comerica Park, with its’ Ferris wheel and carousel, the remnants of a grass and dirt diamond still remain less than a mile away from their previous home at the corner of Michigan and Trumbull, where the old, beloved Tiger Stadium/Navin Field/Briggs Stadium stood for decades before being torn down.

Just across I-75 from Comerica Park, construction continues on Little Caesar’s Arena – new home, as of this autumn, of the National Hockey League’s Detroit Red Wings, less than a mile from the waterfront Joe Louis Arena, which became known as “Hockey Town” when the Wings, who began playing there after moving from Olympia Stadium in 1979, started winning Stanley Cups again.

The now vacated Joe Louis Arena, like Tiger Stadium and Olympia, will meet its’ fate soon via the crash of a wrecking ball, as will the Pontiac Silverdome, the giant 80,000-seat stadium in the northern suburbs which at one point was home to the NFL’s Detroit Lions (who left Tiger Stadium to play there), NBA’s Detroit Pistons and the USFL’s Michigan Panthers plus a couple of NCAA bowl games. Historically speaking, the Silverdome, which inflated its’ fiberglass roof in 1975, also hosted the first cold weather Super Bowl in 1982 and its’ record crowd of over 93,000 was for a Papal Mass said by Saint John Paul II in 1987.

While there were desperate efforts to save Tiger Stadium, including a crowd of fans ringing the ballpark to simultaneously hug it and loyalists chaining themselves to the building, no such efforts are imaginable for Joe Louis Arena or the Silverdome, each of which had annoying quirks. The concourse of the garage-like “Joe” (not to mention the inadequate number of small restrooms) were overcrowded and accessible by a steep flight of windy, cold concrete steps. The “luxury suites” were in the rafters which made watching hockey like viewing an ant farm, and, at the end, the lower and upper bowl seats sagged enough to make sitting in them a core workout. My grandfather Art, Shiels, took me to the very first sporting event held there – a Harlem Globetrotters game – staged before the interior was even painted. And my then little hockey player son Harrison Shiels literally bumped the legendary but nevertheless friendly Hall of Fame defenseman Gordie Howe in the concourse once, and it was a magical meeting, so I do have some nostalgia for the place.

As for the Silverdome, my parents Art and Gladys drove me to every home game for two seasons so I could work the locker room and sideline as a ball boy when Anthony Carter, Ken Dallafior and the Michigan Panthers won football championships there. But who can forget the frigid walks across that massive tundra of Pontiac parking lot only to be hit by the massive gust of wind the ceiling support contraption made when entering through the revolving doors? And sitting in the cheap seats, better known as steep seats, required mountain climbing gear and provoked vertigo. Heavy weather brought the roof down twice – once forcing the Pistons to play out their season at Joe Louis Arena. It’s bizarre to think a group not long ago bought the Silverdome, once the NFL’s biggest stadium but now in disrepair, for about the price of a suburban Rochester house.

Since the Pistons are moving downtown, one wonders if the once celebrated Palace of Auburn Hills is next to join the litany of Detroit sports ghost ships?

Michael Patrick Shiels may be contacted at InviteYourself@aol.com or via TravelTattler.com His talk radio show can be heard weekday mornings in Lansing on 92.1 FM.