I met the most important man in the city of Detroit last week…and his name is Curtis.

Curtis wasn’t elected to office or appointed to a board or hired to run a big corporation. He is, rather, a self-appointed, very effective ambassador for Michigan’s biggest city. Curtis is a parking valet/bellhop at the Atheneum Suite Hotel in the city’s Greektown area.

Downtown Detroit became the capital of Michigan for an evening and a day in early January when former Michigan Speaker of the House Chuck Perricone once again gathered legislative leaders, businesspeople, and newly-elected members of the House and Senate for the seventh Dome Magazine New Legislators Leadership Conference. I was honored to broadcast my syndicated morning radio program live from the event. Curtis was one of a number of friendly, helpful staffers at the Atheneum who made Detroit feel like Manhattan, Atlanta, Chicago or any other big business city in terms of professionalism and hospitality. He spoke with joy, used my name frequently, helped move all of the radio equipment to and from the car, and even insisted on helping me with a simple thing like getting a cup with ice for the Diet Coke I was carrying.

Curtis smiled broadly when I told him how much I appreciated his manner.

“You are a fine ambassador for the city of Detroit and for Michigan,” I told him, knowing fully that thousands of international journalists would be in the city for the North American International Auto Show.

Curtis didn’t know I was a travel writer who’d experienced hospitality in hotels around the world, but he, and many of the staffers he was surrounded by at the hotel valet, reception desk, and in the conference area, performed at the top level because they were personable, not bothered by requests, and seemed to care.

The shuttle driver who took my producer Tony Cuthbert and I from the hotel to the Dome cocktail reception at the Port Authority building, took a little shortcut on the way to the event’s riverfront location.

“Don’t try this at home. This is a professional move by an experienced driver. This will get you there quicker,” he joked.

When I checked out of the hotel Friday, the woman at the Atheneum’s from deck told me, “I really hope you will come back and visit again sometime soon. It’s especially nice in the summertime.”

When Perricone moved the biennial new leadership conference from Kalamazoo to Detroit, its previous iterations were staged high atop the Marriott Renaissance Center, a 70-story perch from which participants could just about see all the way to the capital. The view came with a price, though because the massive, sprawling Renaissance Center has always been a fortress – an island unto itself – and tends to consume, if not imprison, everyone who stays in its complicated confines. 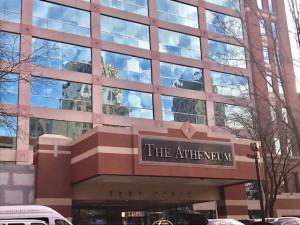 The Atheneum hotel in Downtown Detroit.

Atheneum Suites is a different matter – connected by the People Mover but logistically weaved into the city center surrounded by blocks and blocks of all manner of entertainment and dining. Gambling, an ice skating rink, churches, the Fox and Gem Theaters, entertainment and sports venues, and every manner of ethnic restaurant imaginable are within walking distance if not literally attached to the hotel. “Aladdin” was showing that night at the Opera House, across the street from the Detroit Brewing Company. Fishbones, which at one time boasted the world’s tallest indoor waterfall; The Old Shillelagh Irish Pub; and, imported from Chicago, a brand new Giordano’s deep dish pizza restaurant are in the immediate district, as is the time-honored Pegasus Greek restaurant, where Senator Curtis Hertel Jr. and his wife Elizabeth dined to celebrate his birthday during the conference. (House democratic leader Christine Greig also celebrated her birthday during the conference.)

“My father used to take me to Pegasus to dinner with Ted Gatzaros to celebrate birthdays, so I am honoring the tradition,” Hertel told me during the reception at the Port Authority.

The next morning, former Senate Majority Leader Randy Richardville also spoke of his affection for the late Gatzaros, who owned, among other properties, Pegasus, Fishbones, and Atheneum Suites Hotel while paving the way for the Greektown Casino which Dan Gilbert, keynote speaker at the conference’s Port Authority dinner, just divested himself of.

Hertel emphatically refused my invitation for a celebratory, after dinner night cap at the Bouzouki Lounge – the “gentleman’s club” across the street from the Atheneum. (Of course I was only kidding with him.)

I was also only kidding the next morning at the conference during my radio interview with new House Speaker Lee Chatfield, the Republican from Levering who was about to participate in his first Quadrant Meeting with Governor Whitmer and the three other House and Senate majority and minority leaders.

“Can I hideout in the room like a fly on the wall and listen into the meeting?”

“I will record it for you,” Chatfield quipped.

After the interview I heard Chatfield bemoan, “Oh now I am going to have to be sure to tell the Governor’s office I wasn’t serious about that.”

Another State Rep. who danced around a tricky question I asked while interviewing him was Yousef Rabhi, the democratic floor leader from Ann Arbor.

I asked, “Can you name your top three favorite restaurants in Ann Arbor?”

Senate Majority Leader Mike Shirkey, the republican from Jackson, handed me his business card which was emblazoned with an acronym: “Y.A.F.W.Y.A.L.F. Matthew 7:7.”

Naturally I asked him during our radio interview what the letters meant.

When I suggested that some people might be surprised to hear a Republican refer to Whitmer as “my new governor,” Shirkey didn’t shirk his statement. “She is my new governor. Words matter, Michael. Voters are always right. It doesn’t mean I like what they decide, but voters are always right. They chose her. We have the same objectives for Michigan. We may have different paths, but I will endeavor to look for areas where our paths cross.”

Thanks to Perricone and his loyal sponsors, the paths of legislators new and experienced crossed in Detroit where the Motor City game them a marvelous welcome during the Dome Magazine New Legislative Leadership Conference.

Contact Michael Patrick Shiels at MShiels@aol.com  His latest book is “I Call Him Mr. President – Stories of Fishing, Golf and Life with my Friend George H.W. Bush”  His radio program may be heard on stations across Michigan and online at MiBigShow.com or through the one-touch app Michigan’s Big Show starring Michael Patrick Shiels