Rookie mobster Michael Corleone, in Mario Puzo’s book “The Godfather,” is sent in exile from New York to hide out in Sicily. In the resulting Academy Award-winning movie, director Francis Ford Coppola chose the tiny village of Savoca – population 89 – as the location shoot for those old world scenes starring Al Pacino. Many of them were filmed over a six-week period on the patio of Bar Vitelli, Savocaa’s small, cliff-side café near the location of the church in which Corleone marries Apollonia Vitelli – the daughter, in the story, of the cafés owner. 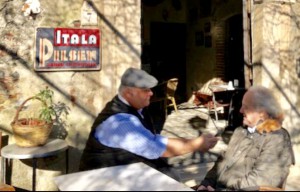 An interview with Bar Vitelli’s owner at the Sicilian setting in The Godfather. Photo by Julian Motfolea

Corleone, in the film, asks Apollonia’s father, on the patio, for his permission to formally court her. A traditional Italian Sunday family dinner, and the eventual outdoor wedding reception, during which the newlyweds are seen dancing, was also staged on that veranda in front of Bar Vitelli and in the tiny piazza.

Nearly a half-century after The Godfather’s premier, visitors to Bar Vitelli and its patio find it exactly as Corleone did in the movie – complete with the beads hanging from the door and the “Itala Pilsen” metal sign on the building’s flagstone facing. They’ll also hear gentle Italian mandolin music playing, including unmistakable melodies from The Godfather’s soundtrack. From that veranda visitors can also see a silhouetted monument to Coppola. Production photos snapped during the filming and newspaper clippings adorn the walls of a small interior room. Tasteful, unique Godfather souvenirs are sold alongside a counter offering espresso, brioche, granite di limoni (Coppola’s favorite), Sicilian wines, and other tasty tipples.

I made my way up a winding mountain road to Bar Vitelli on a quiet Saturday Morning. ICBellagio.com, a celebrated tour company which creates authentic, insider Italian travel experiences such as access to the Vatican, Venice and elsewhere, had actually arranged for me to have a conversation with the current proprietor Lorenzo Motta. Motta, who also gave me a personal tour, is the nephew of Maria D’Arrigo who owned Bar Vitelli during filming of The Godfather – and production of its two sequels, which were filmed in nearby Forza D’Agro. I purposely, to play the role to its fullest, dressed in the same clothing (a flat cap, dress shirt with rolled-up sleeves, and vest) Corelone wore in the film. Borrowing a line from the movie, I insisted to the white-haired Motta, “I am an American hiding in Sicily and there are people who would pay a lot of money for that information.”

He laughed and insisted he “knew nothing” before I continued to tease him by again invoking the Corleone character: “Do you have a daughter?”

“The Godfather, for me, is a parody of life,” Motta answered. “It is the power, the face of crime, politics and finance.”

Tourists to the region, including, historically, the Hollywood crowd, typically stay at hotels such as the luxurious Belmond Grand Timeo in nearby, glamorous, Taormina which was, ironically, where James Gandolfini, who played a mob boss in the television series “The Sopranos,” was headed when he died of a heart attack in Rome. But pilgrimages to Bar Vitelli are so popular that Motta and his wife Nuccia will, for the first time, open 10 guest rooms, an event terrace, and subterranean wine tasting room in March.

“Savoca is a magical, simple place with a beautiful panorama of the sea below, the mountains, and the Mt. Etna volcano,” said Motta.

The 13th century Church of San Nicolo (now known as Santa Lucia), from which Corleone and Apollonia are seen processing following their wedding is perched upon the dramatic mountainside. Visitors can retrace the ill-fated couple’s steps. What moviegoers don’t see in the film – but tourists will view upon visiting – is the jaw-dropping, sweeping view of the sea and mainland Italy far below seen from both Bar Vitelli and the church. Coppola, in directing The Godfather, hid those views in the scenes since Savoca was meant to portray the town of Corleone, which in reality is hours away in the Sicilian countryside and unremarkable visually.

Delta Airlines flies, via Rome, to Catania Airport just over an hour from the Taormina/Savoca/Forza D’Agro “Godfather” region.

Contact Travel Writer Michael Patrick Shiels at MShiels@aol.com.  His radio program may be heard weekdays at MiBigShow.com or in Lansing on WJIM am 1240 from 9-noon. His latest book is “I Call Him Mr. President – Stories of Fishing, Golf and Life with my Friend George H.W. Bush”