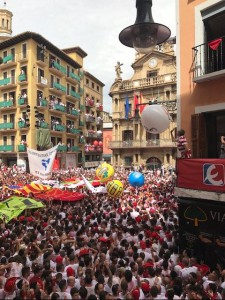 Before dawn on the seventh day of the seventh month in Pamplona, Spain I walked out of the Hotel Palacio Guendulain, but not before swallowing a couple glasses of Russian vodka for courage…an act I justified by imagining it came with the approval of Ernest Hemingway – a writer known for pickled prose. As revered as “Papa” is for glamorizing the dramatic annual tradition in his book “The Sun Also Rises,” Hemingway, after witnessing a man being gored to death, refused to actually “run with the bulls” himself. But I was about to just that after first making the traditional stop at the Church of San Fermin to pray for my safety and the deliverance of the others who would join me on the old town’s narrow, cobblestone streets after sunrise. Six massive bulls and six steers would be released to charge over a manic, half-mile route – and some of the runners – into the bull ring. For all the revelry and partying that went on throughout the opening night of the Festival of San Fermin, the church was quiet and tense as participants filed in and out on their way to the “Encierro,” a word that translates to “enclosure,” which is what the walled-off, boarded up streets become during the cartoonish cultural phenomenon known as “Running of the Bulls.”

Participants, each dressed in all white with a red neckerchief to salute the beheading of the martyr San Fermin, have to be on the streets by 7 a.m., an hour before the church bells ring and two rockets signify the bulls have been released from their pen at Calle Santo Domingo and are storming up the sloped street.

“If you go through with this you must realize you are literally running for your life,” warned Francisco, the local guide from MadeForSpainAndPortugal.com who coached me on where to position myself on the street and what to expect. Francisco told me he gave up running with the bulls once he had children. We practiced some “walk through” simulations and the guide’s advice, not only for the run but for authentically navigating the zany, boozy fiesta and its parades and cultural events, plus the Hemingway haunts and bullfights, was priceless. 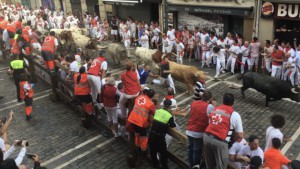 After a pensive hour enclosed in the stately Plaza del Ayuntamiento, with residents leaning out of their balconies above the route above to watch, scream, and cheer, I heard the explosions of the rockets, which chilled my spine and shook my heart. There was no turning back…especially when a platoon of panicked people came pouring up the street fleeing from the bulls, which, unbeknownst to me, had already, at the very start of their run, gored the first of three men they would injure that morning. Caught up in the stampede I began to run, bearing left, as I had been advised. In the corner of my right eye I caught a flash, and with a turn of my head, finally a full view of the ghostly beasts – the stars of the show – barreling in a mighty pack up the street to my right. Relief washed over me as I realized I unscathed as the bulls passed me and I ran with joy behind them up through “dead man’s corner” and onto Estafeta, where the six, slower and less harmful steers then slid by on my left.

The adrenaline had burned up all the pre-run vodka, so it was time for champagne to celebrate!

Ultimately, three men were gored during that three-minute run, so if you’d rather experience the world’s most intriguing custom from the safety of a “front row seat” with a local family in a balcony above the street, MadeForSpainAndPortgual.com can arrange that, too. It’s like having a luxury box view of history at the world’s greatest party!