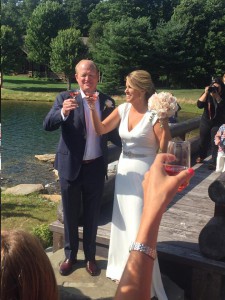 Legend has it that sea captains are empowered to perform weddings for passengers onboard the vessels they command. But for Captain Chris Shepler, President of Shepler’s Mackinac Island Ferry, performing his own ceremony at sea this August was out of the question. Why didn’t the strapping sailor, though, when it came time to marry his fiancée, Mikie Tracey, whom he’d met eight years earlier at a travel conference, simply take the helm? Why not climb aboard the “Miss Margy,” steer her out into the strait, and join hands and hearts in the spot where Lake Huron joins Lake Michigan?

“First of all, my brother Billy, our fleet captain, told me, ‘No way, man. We’re too busy at that time of year. Get your hands off the steering wheel!’” Shepler laughed.

Shepler’s, the 72-year old business their patriarch father William founded, and his boys operate with their sister Patricia, ferries flocks of families to and fro from Mackinaw City and St. Ignace to Mackinac Island through virtually four seasons.

As for the matrimonial powers of ship captains, it seems their onboard authority is somewhat embellished.

“We can marry people but the nuptials are negated once we hit shore,” Shepler reveals. “The wedding is legal for the time you’re on the water, but unless the captain is ordained, the marriage is null and void once we hit shore.”

So Shepler went the opposite direction and became the ultimate landlubber, staging his wedding on the terra firma of a golf course called “True North,” a private, forested enclave on high and dry land above Little Traverse Bay in Harbor Springs. And he even presented his bride with the wedding gift of a horse – not a seahorse but a show horse named “Bling” Mikie rode to a jumping championship at the Evergreen Classic in Seattle only days after the wedding.

“It was the most special whirlwind week of my life. I got married to the love of my life and competed on my wedding present,” the new Mrs. Shepler said. “Chris is the best thing that ever happened to me!”

Shepler figured the wedding guests who came in from Seattle on his bride’s behalf became new fans of Michigan.

“Holy cow the wedding could not have gone any better,” he exclaimed.

True North’s general manager Michael Kernicki, who climbed aboard a Shepler Ferry a week later, helped facilitate the “silent disco,” at the wedding. Guests grooved on the dance floor to synchronized music only they could hear by wearing headphones.

“It was one of the coolest things about the wedding,” Kernicki said. “This is one of the most fun couples going.”