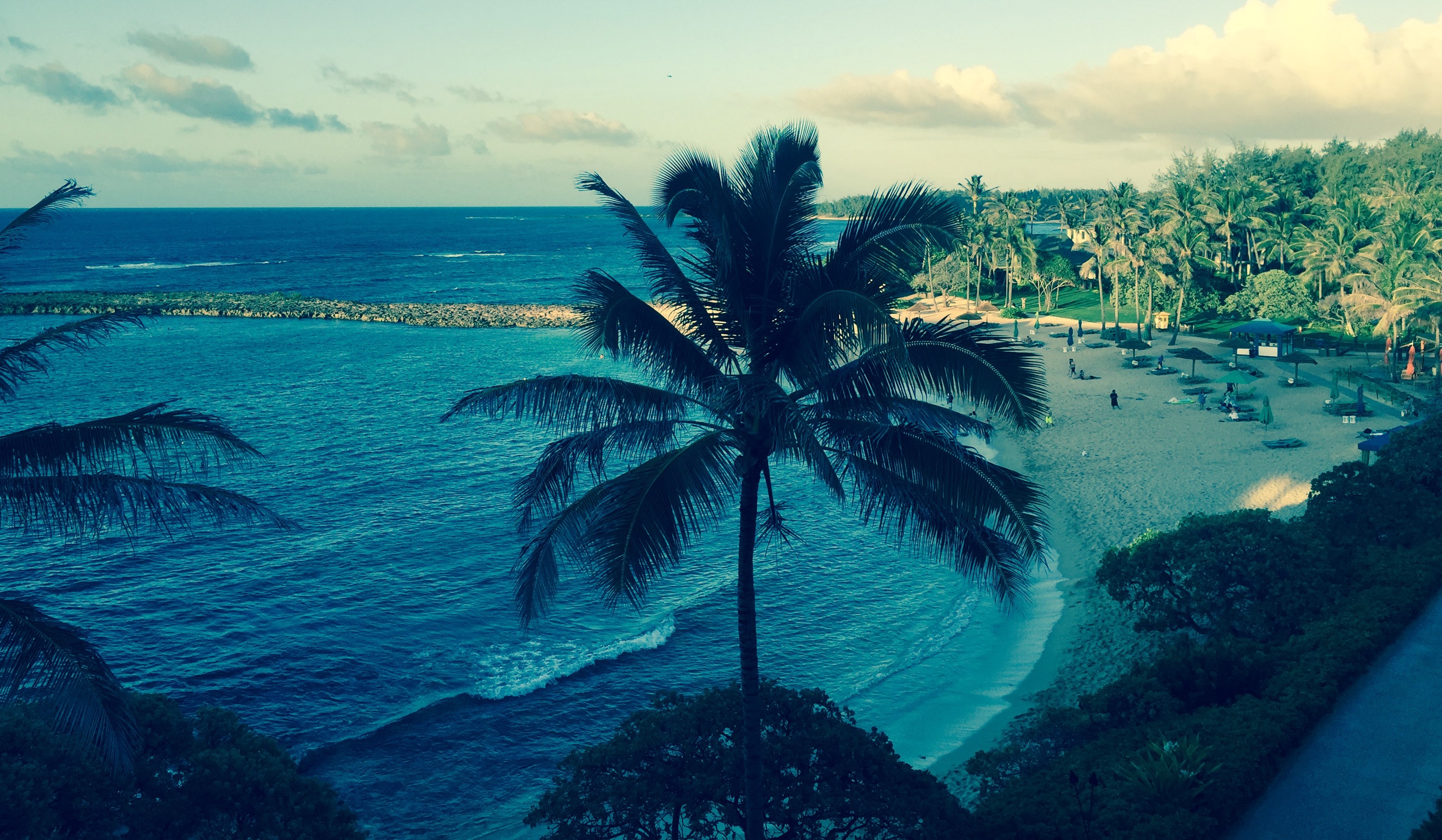 Picture From Our Room With a Cool Filter

My wife and I have a way of finding inclement weather on our vacations and on our recent trip to Hawaii, as if preordained, tropical storm Darby came through while we were staying on the North Shore of Oahu at Turtle Bay. The storm veered south at the last minute and it only resulted in one day that we couldn’t spend at the pool. There was booming thunder at night and winds that made the golf a bit treacherous. But that was just fine. We were glad to be there. We spent the first two nights at the Hilton Hawaiian Village in Waikiki.  Turtle Bay is a world away from Waikiki. Here’s one example: I arrived at the Hilton in Waikiki at 11:30 AM after an early flight from California. I asked the front desk person about early check in. They wanted me to pay a $40 early check in fee. Early check in doesn’t seem like it costs the hotel any extra money. Is the room ready or not? If it’s ready, let me check in. If it’s not, check my bags and I’ll hit the pool or the bar or both. I mentioned I was a Blue Level Hilton Honors member to the check-in lady but, not surprisingly, that didn’t help. It was late July and the Hilton Hawaiian Village was packed with kids, grandparents, couples and honeymooners.  I didn’t really want to take the chance there might be a line later in the day. So I paid the fee.

At Turtle Bay, when we arrived at noon, they got on the walkie talkie to housekeeping to see if there was a room ready. Yes, there was. And she just checked us in, no fee. It’s easy to make guests happy.

And they made us happy for our entire week stay. They have two golf courses at Turtle Bay, the deservedly more famous Palmer and the Fazio. They had a screaming twilight deal that included rental clubs, a sleeve of balls, green fees and cart for $65 on the Fazio and $90 on the Palmer. Whaaa? That’s a great deal for Hawaii right? That’s a great deal for anywhere. I took advantage of one round on each course during my stay. The Fazio is flat and walkable, if you’re into that sort of thing. The course is more interesting on the back nine where the doglegs challenge your perception. Bunkers look flyable or greens look reachable when they’re absolutely not. I liked it and in the pre-Darby wind, it was a handful. By the way, the course designed is George Fazio, not his more accomplished golf course-designing nephew Tom Fazio. So it’s a “Fazio” but not a Fazio.

The day we had to take shelter from Darby my wife and I played Connect Four with a Longboard Ale and a glass of sparkling wine in the lobby. We then headed to Surfer’s, not your ordinary lobby bar. It’s more like a night club with an ocean view. They opened early that day because the pool bar was closed. They had a Sunday night Karoake party, where we enjoyed a version of “Ghost Riders in the Sky” from a woman who looked liked Willie Nelson. And Lynyrd Skynyrd’s “Simple Man” from a guy who looked like Whoopi Goldberg. They both did serviceable versions. I wanted to do Convoy, the 1975 cult classic by CW McCall, but the dj guy didn’t have the song.

After the storm passed I played the Palmer course and…wow! The course was in perfect shape, obviously, as it’s a top ten course in Hawaii in most of those lists. It has also hosted LPGA and Champions tour events. There are a couple of holes that have ocean views but the strategy and setting throughout the course are world class. I have played several of the Top 100 courses in the world and the Palmer course is right there with the best. I would put Pacific Dunes and Pebble Beach ahead of the Palmer course and that’s it. I prefer it by a long margin over the Plantation Course at Kapalua and by a small margin over Chamber’s Bay. The course can be tough but the beauty is overwhelming. I played the 11th and 12th a couple of times before heading in for the day. I was like a bad guest drinking the last of your beer; I just wouldn’t leave. 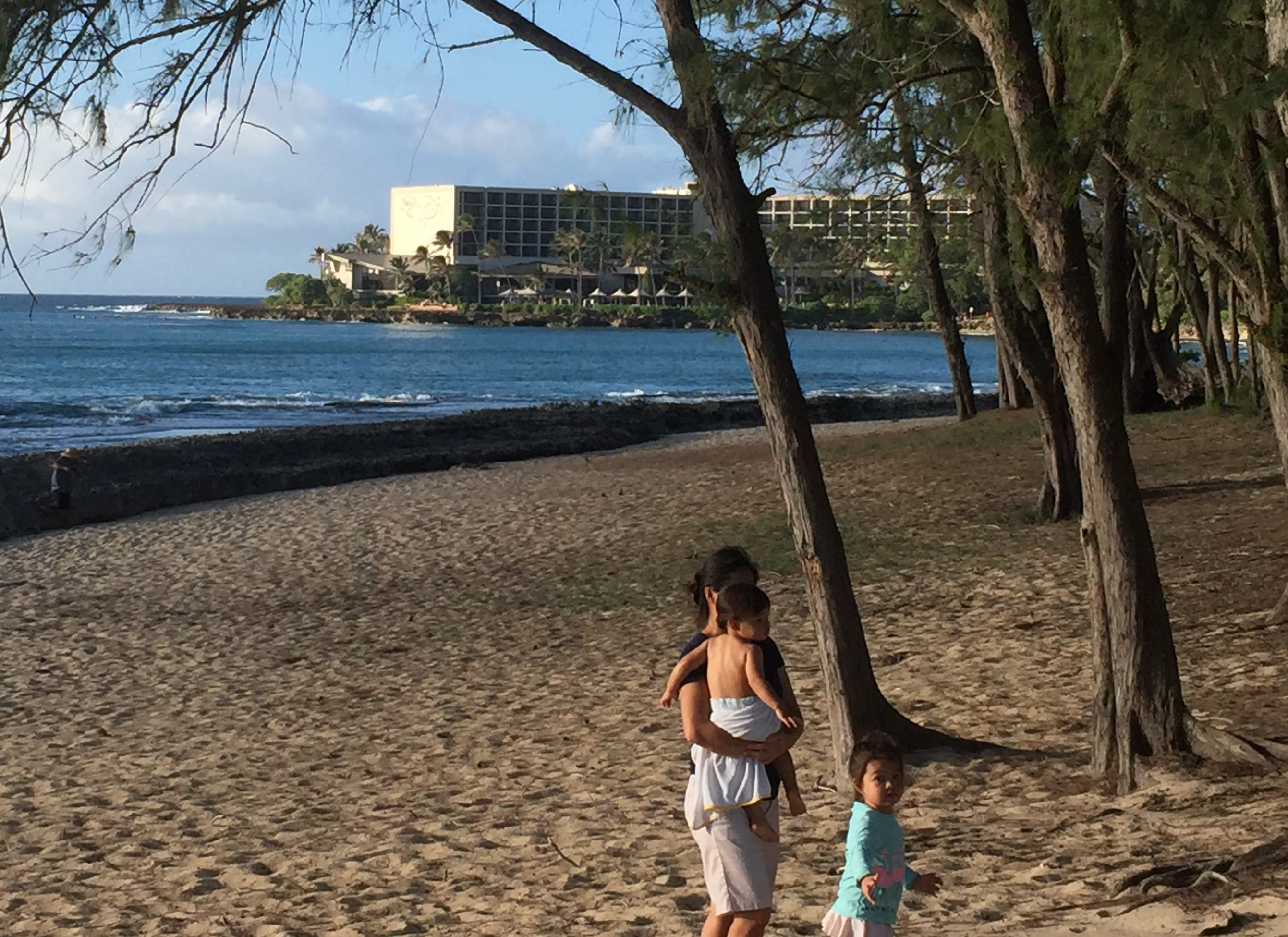 View From the Fazio Course

One other item needs mentioning; in case you haven’t noticed, hotel fitness centers aren’t usually known for their stunning views. Most fitness centers are stuffed in a basement with no windows and a CNN-blaring TV. If you’re lucky the LifeCycle isn’t too rusty from sweat and there’s a water cooler. The Turtle Bay fitness center is the antithesis of that. Perched over their famous surf break, with floor to ceiling windows, super helpful staff and pristine equipment this is a fitness center you want to go to. The giveaway is that many of the locals come here for their workouts.

I know some frequent travelers avoid Oahu like they would a trip to Disney World in July. But just know that for golfers, gym addicts and Willie Nelson wanna-be’s, you can’t go wrong at Turtle Bay.