Monday night of Masters week I started getting chills and cold sweats. It didn’t feel exactly like the first symptoms of the flu. Usually, I get a sore throat and then come the chills, runny nose and cough. This was just straight up chills. I stayed home from work Tuesday morning and gave up box seats to a San Francisco Giants game that night. The symptoms persisted through Tuesday night with the night sweats getting so bad I had to change my shirt several times during the night. I called in sick the next day and slept about 16 of the next 24 hours. The only silver lining was that it was Masters week. So between naps I had to the opportunity to watch the Golf Channel’s “Live From” shows and ESPN’s coverage of the Par 3 Contest. 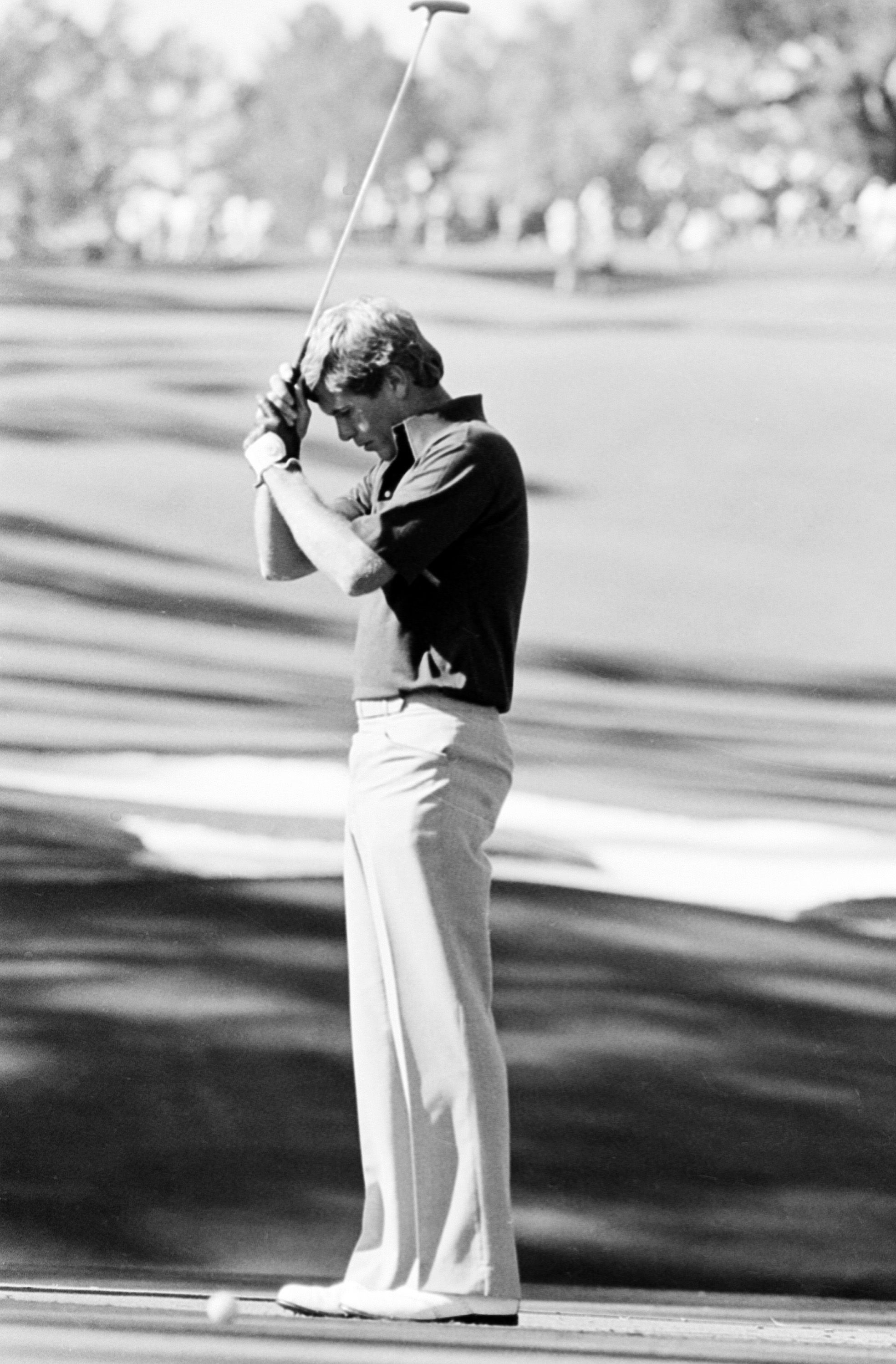 I ended up watching a segment on Ed Sneed’s collapse at the 1979 Masters, which might be the least popular of many epic Masters collapses. Everyone remembers Greg Norman in 1996 and Scott Hoch in 1989 but I had no idea Sneed had blown a five stroke 54 hole lead and a three stroke lead with three holes to play to eventually lose in a playoff to Fuzzy Zoeller. In the segment, it seemed a bit cruel that they had him watch and comment on the last few holes from his home theater while they panned close up to his pained face. He did say, “I don’t think about it every day.” Which sounded more like a wish than a fact. Since they have to fill about 18 hours of programming every day of Masters week with no actual competitive golf they reran this segment. I admit it was worse watching it the second time around even when I knew what was going to happen to the poor chump. 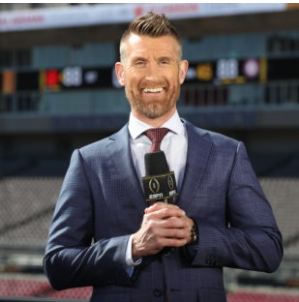 ESPN’s Marty Smith did a segment on Tony Finau in which, of course, they replayed the worst moment of his life on a golf course. Finau dislocated his left ankle celebrating after his hole-in-one in the Par 3 contest last year. Forced to explain the thing again for probably the 1000th time since it happened, Finau was good humored. This was after Smith started the interview by giving him a “present” that he actually had to unwrap like some overgrown birthday boy that ended up being a high top golf shoe, left side only. ESPN also played this more than once and forced me to change the channel quickly to avoid enduring the awkwardness twice. 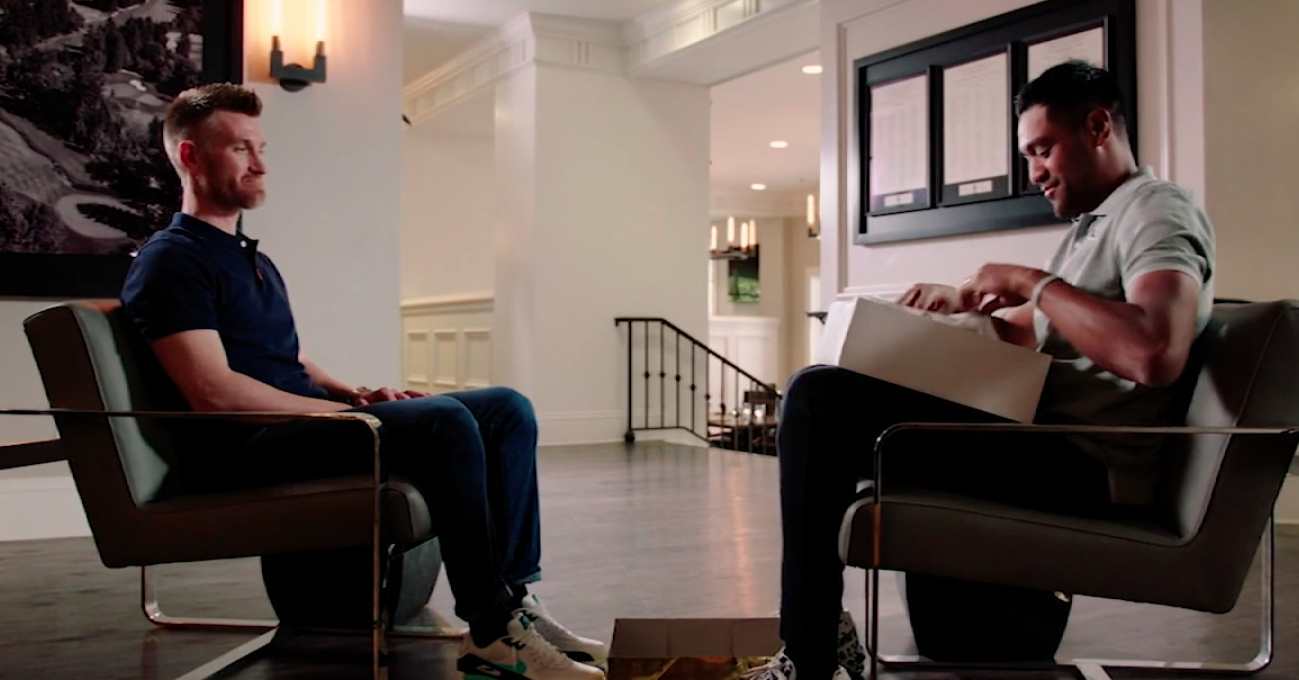 I Got You Something 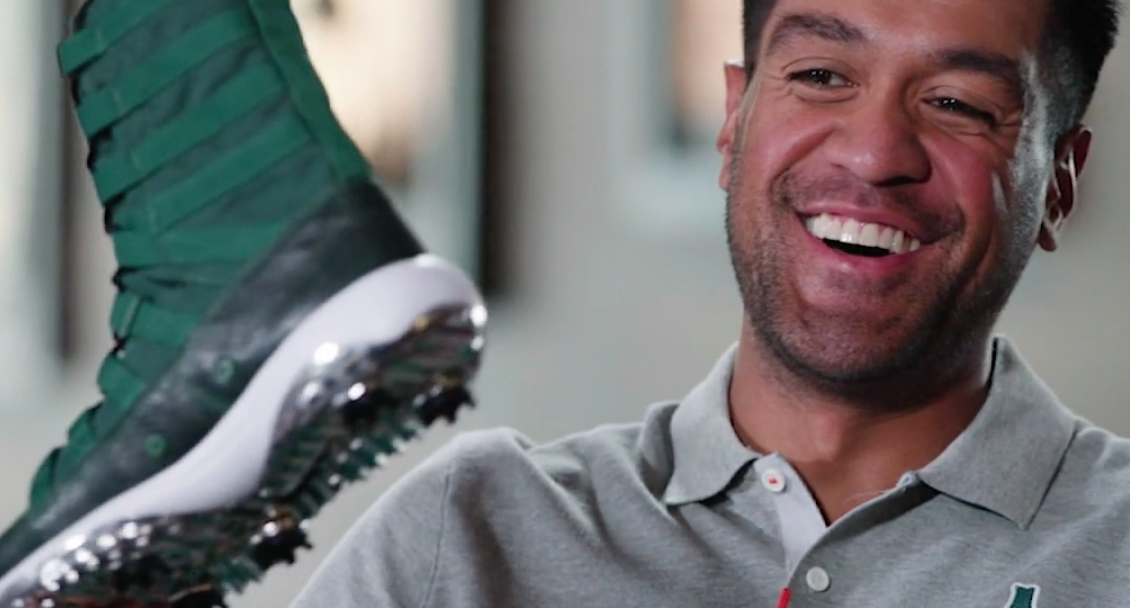 Wednesday night before the start of the Masters I was much the same with chills and night sweats. Exactly two weeks prior I went to the doctor to get treated for an ear infection. Two days after that I received an urgent call from my doctor saying that while I was there a patient that was in the waiting room around the same time was diagnosed with measles. He wanted me to come down immediately for a Measles Mumps and Rubella vaccine. I said sure and got vaccinated in about 10 minutes.

I wasn’t feeling much better Thursday morning but I got up looking forward to calling in sick again and being able to watch wall-to-wall first round coverage. Brooks Koepka had a stupid hat on but played great to take the first round lead, tied with Bryson DeChambeau, who also had a stupid hat on. Tiger didn’t miss the first fairway, which was a good sign, and ended up playing well enough to shoot 2 under. He usually doesn’t start all that well and the signature Tiger move is to make a stupid-low mid tournament run where he goes from four back to two ahead in a matter of 8 holes and then he salts it away Sunday.

My situation turned from mostly annoying and inconvenient to scary about mid morning. I went to the bathroom to shower the sweat from the chills off me and discovered that I had red lesions on my upper torso and forehead. I looked up the symptoms of measles and while I didn’t have all the symptoms the timing of the onset of the symptoms was perfect from when I had potentially been exposed. I emailed my doctor who took a frustratingly long time to get back to me. He asked me to send pictures. I did but then after another delay he replied he couldn’t see the lesions very well. I sent one of myself in better light. And, by the way, measles don’t look flattering in any light. Later in the day I got a call from the dermatology department asking me to set an appointment to have the lesions looked at. Unsure what my doctor was thinking, I told the nurse I didn’t think this was a dermatology issue and that I wanted to talk to my doctor before making the appointment.

Five minutes later I got a call from another doctor, an infectious disease specialist. He said under no circumstances should I make an appointment with the dermatology department. I would need to go the ER in Santa Clara where they had a “negative pressure” room that would prevent any airborne circulation of my exhaled breath. There they would take some tests to determine if I had measles. We made arrangements to meet the next morning at 7 AM.

I woke up the next morning and actually felt not awful. I drove to the ER, where, not surprisingly, they had a spot right in front. Bruce, the nurse, met me in the parking lot with a hood and a breathing apparatus. Measles is highly contagious and if you haven’t been immunized you have a 90% chance of getting it if you are exposed to someone who is infectious. I was escorted to the negative pressure room where I was examined by two doctors who both said it looked like I had measles. Under the infectious disease protocol, they would have to send the tests to the State lab. They hoped to have the results later on Friday afternoon. When I called my friend Jason and told him I might have measles and that I got it when I was at the doctor being treated for an ear infection he just laughed at me and said, ”What are you? A fourth grader? How do you get an ear infection and measles?”

On the way home I was contacted by the County Department for Disease Control who wanted to know everything I did last weekend. They were preparing to make public everywhere I went while I was contagious. The call took about 45 minutes. As I recalled I went to two grocery stores, six different restaurants or bars, a golf course, a beer garden and an art gallery. I also went shopping at the local outlets mall and there I visited about a dozen stores there and a completely packed Chipotle. I was going to be Patient Zero in a measles outbreak. I also met my across the street neighbor for the first time and my friend’s dog sitter and shook both their hands. Lucky for everyone I didn’t go to the Giants game Tuesday night.

Meanwhile in Augusta on Friday, Tiger made an all-world-for-anyone-else-but-rather- expected-for-Tiger birdie on the 14th hole from the woods after getting slide tackled by an overzealous security guard. He played a low punch through a hole between branches that the cameras couldn’t even locate. As the gallery closed in around him after the shot, the security guy hustled in to keep people away from Tiger and in his rush he slid on some mud and right into Tiger’s ankle, almost ending his Masters and his career.

There was a half hour lightning delay that could have thwarted Tigers momentum but didn’t. At the end of the day there were five players, all major winners, tied for the lead at 7 under with Tiger lurking one back. It was setting up for an amazing weekend of golf.

Later that day I still had not heard from the State lab. I looked like I would end up having to sit in my house all weekend, which was forecast to be perfect Northern California spring weather. But at about 7:30 PM I got a call from the doctor and he said he had good news. I didn’t have measles! My infection was just a bad reaction to the vaccine. He was certainly surprised, saying that he had never seen anyone have that kind of reaction. And as it turned out, Tiger and I both were able to have pretty great weekends. Tiger won the Masters and I beat measles-light.