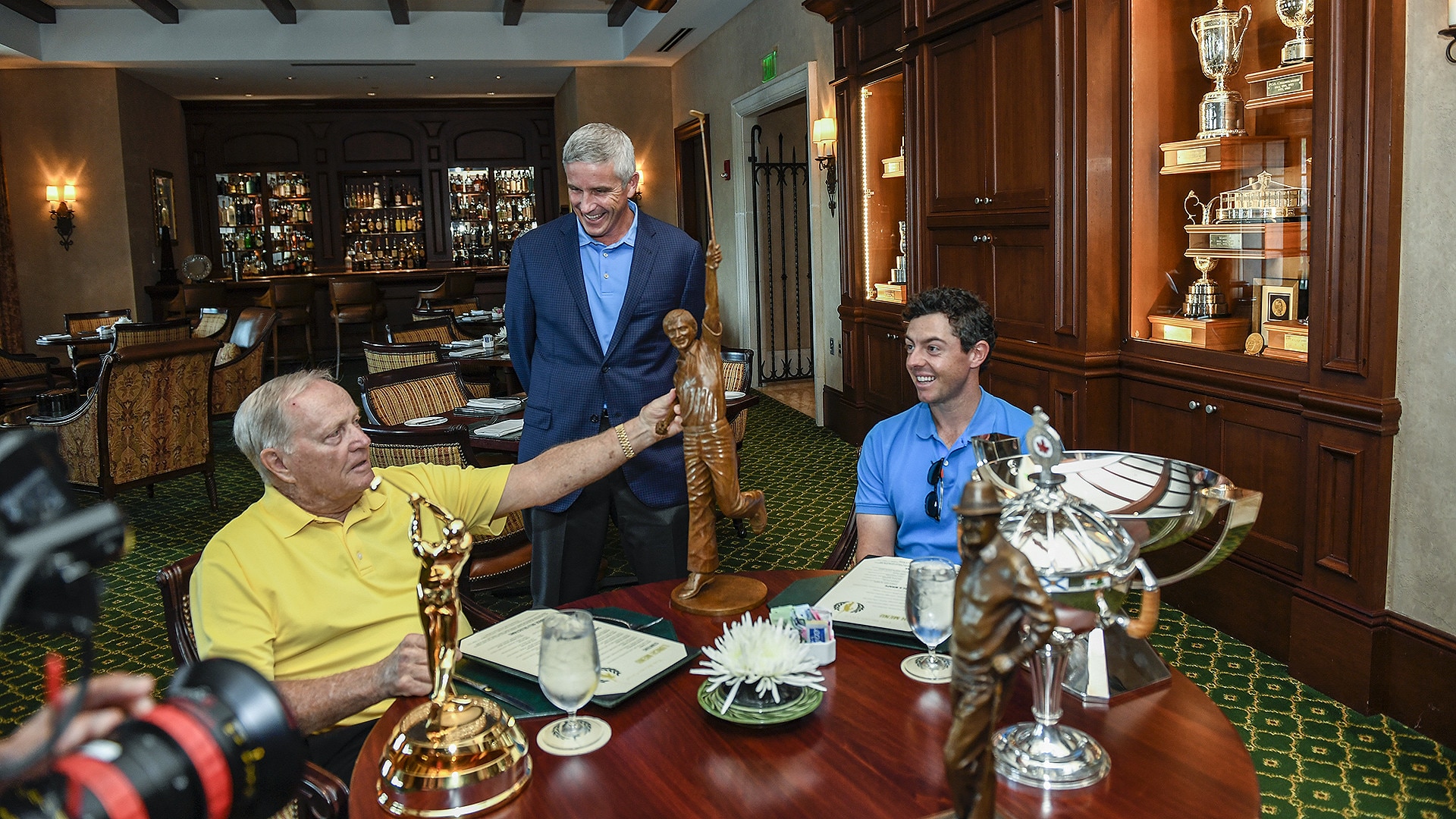 Really? I’m Player of the Year? Can I order a cheeseburger?

Okay, that headline was intended to be clickbait, but Rory McIlroy winning player of the year over Brooks Koepka was an injustice. Even Rory (first names only from here on out) was shocked when Jack Nicklaus gave him the award. How does something like that happen? Well, we don’t really know because the PGA doesn’t reveal anything like vote tallies or who gets fined for slow play or PED suspension details. The Player of the Year is voted on by members of the PGA Tour and we don’t know if Rory won by one vote or 50 votes.  We don’t even know how many of them voted. So like their secrecy on everything from drug testing to slow play we just don’t have much insight into how Rory took the Jack Nicklaus award home.

Both players won three times; Rory won the Players, the Tour Championship and the Canadian Open. Brooks won the PGA Championship, the CJ Cup and WGC FedEx-St Jude. So based on the prestigious-ness of their wins I’d say that’s a push.

Rory won the scoring title and Brooks won the official money title. But official money doesn’t include the $15 million that Rory won for the FedEx Cup. I’m not sure why that $15 million isn’t “official” money. I’m guessing FedEx money works like any other money when you deposit that big ass check. I doubt the PGA tour would provide an explanation of how some money isn’t like other money.

What Brooks did again this year was lurk in the rear view of every player leading a major. In fact he has seemingly lurked at every major in the last three years. No player wants to see Brooks Koepka lurking 2 strokes back at a major. He’s like the Tiger Woods of golf. Oh wait, he’s the new Tiger Woods! He stood 2 back at the end of the 3rd round of The Masters behind Francesco Molinari. He ended 1 back in 2nd. Rory ended T-21 seven back.

At the PGA Championship, Brooks was up by 7 to start the 4th round and it looked a lot like the 2018 PGA Championship when he blitzed the field by 8 but he wobbled a bit in the final round but still won by 2. Rory finished T-8, 9 strokes back. At the US Open Brooks again hung around the leaderboard making things semi-tense for a stout Gary Woodland and finished 2nd again, 3 back. Rory finished T-5, 8 back.

And all that might not separate them by that much but then The Open championship happened. Rory, in his backyard, had the expectations of an entire region/province (whatever they call Northern Ireland) riding on him and every media outlet devoted royal wedding -like coverage to him going into it. He went off as the heavy favorite and on the first hole he pull hooked an iron out of bounds, cracking some ladies’ cell phone in the process. His third and fourth shots were also pulled left leaving him in a shrubbery (shout out Holy Grail) left of the green lying four. They found his ball but it was unplayable. He chipped to five feet, then pushed the putt right to yank a quadruple bogey. He also missed an 8 inch putt on 16 and tripled the 18th to shoot 8 over. He showed a little moxie, missing the cut by a stroke after shooting a 65 in the second round. The first round was variously referred to as a “nightmare”, a “disaster” and “brutal”. Brandel Chamblee called it the C word, a choke job. Ouch. Meanwhile, province-mate Shane Lowry built a 4 stroke lead over three rounds and finished 6 clear. Brooks lurked but finished T-4 9 strokes back. That’s a performance that should have ruined Rory’s chances for player of the year.

So if you’re keeping score at the majors (which is the point) Brooks Koepka finished a combined 13 strokes back on the majors he didn’t win. Rory finished a combined 24 back on the majors where he didn’t miss the cut. And in what could have been the biggest tournament of Rory McIlroy’s career he played like Greg Norman on a Sunday leading The Masters. Why didn’t Brooks win player of the year then? Alas, he may be unliked by his fellow golfers. But this shouldn’t be a popularity contest. It should be a golf contest. If golf were a popularity contest both Arnold Palmer and Phil Michelson would have a US Open and Patrick Reed wouldn’t have a Masters.