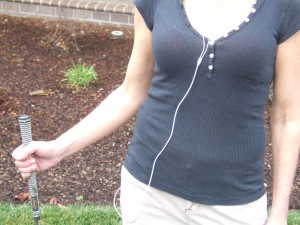 I don’t practice all that much. I’d much rather go out and play a round. Even 9 holes at the infield of the nearby horse track rates better than banging a big bucket. So how can I make it more enjoyable? I know incorporating cold beer (or a flask in winter) into any leisure-time activity helps. But what else could I do to make practice less like practice? Why not bring the Ipod to help my tempo?

The next question is what music would be best to practice to? Let’s start with the musicians who play golf: there’s Kenny G, Michael Bolton, Huey Lewis, Justin Timberlake and Alice Cooper. I’d say, no, no, no, maybe and not sure. Kenny G and Michael Bolton? I would be mortified if anyone found that stuff on my Ipod. It would be like someone finding episodes of Real Housewives on my DVR. Huey Lewis and the News? Along with John Cougar Mellencamp they were pioneers in the jock rock genre that led to groups like Hootie and the Blowfish[1] and the Gin Blossoms. And although the band achieved incredible commercial success[2] to me the music hasn’t held up. When I think back on that era I am more likely to evoke the English Beat, the B-52s and Billy Idol for the soundtrack in my head. Justin Timberlake? Sure but I’m not putting any NSYNC on the playlist; I feel justified dismissing their entire catalog based on one song entitled (God Must Have Spent) A Little More Time on You. Alice Cooper? Not sure and not curious.

What other criteria could I use to put together some decent practice music? If the goal is to help keep a smooth tempo in my full swing, chips and putts then I thought I could test some music based on the beat. There’s a website, http://songbpm.com, that will provide the beats per minute (BPM) of any song. I was also curious if certain music genres would be better for tempo. You might think that smooth jazz would be good but I’m not a fan of smooth jazz, so if some reader wants to make the case for smooth jazz, I’ll read the comments.

I chose 25 songs to put on my practice playlist with various BPMs (ranging from a ridiculous 230 for The Rolling Stones Sympathy for the Devil to a barely alive 69 for AC/DC’s For Those About to Rock) and genres ranging from “Classic Country” (Hank Williams) to something called “Post Brit Pop” (Franz Ferdinand). For Those About to Rock has the added distinction of being one of only two songs[3] I could find that incorporate cannon fire into the music. Which, if you’re thinking what I’m thinking, is going to be a pretty awesome way to hit drives.

So off I went to the local range with the real grass and the prevailing tailwind. I must say that the experience was a revelation. I practiced for much longer, especially on chips and putts. I focused on my tempo and rhythm. I stepped away, lined up and stepped back in. I had a semblance of a routine. I sat down, took a swig of Modelo and looked around at others swing tempos. I was groovy. During most songs. Some of the music didn’t work at all. Black Sabbath’s Iron Man, although probably well suited for an autopsy, just didn’t mix with my golf swing. On the other hand, I thought Dave Brubeck’s Take Five was nearly the perfect song for grooving my short pitch stroke. The takeaway, stop, downswing and impact could be timed to hit each point on beat. Overall, the chipping and putting strokes seemed to be more easily timed to the beat of the music. I had trouble timing the full swing to any song.

I did think that lower BPM was preferable but that certainly was not the rule. And, obviously, some songs would certainly have more BPM at a certain points than at others but the website only gives you one BPM for each song. For example, Stairway to Heaven, starts slow but builds to a rocking climax.[4] I don’t think you could pin it down by genre either. Dave Brubeck’s Take Five worked. Miles Davis Freddie Freeloader didn’t. The songs that worked had no common denominator. Sympathy for the Devil with the jungle yelps and bongo drum intro turned out to be wonderful with low chip and runs. Hank Williams probably never played golf but putting to Cold Cold Heart was a simple pleasure. I listened to Franz Ferdinand The Fallen twice because it was so rocking good. Your playlist, I’m sure, will look much different than mine. And that’s the point. What do you want to practice to? What will entice you to practice longer? What song will make you feel cool?

But in the end this was all build up to the finale of hitting drives while playing For Those About to Rock. It was a bit tricky to time the impact to the cannon fire. I tended to be a bit early or late (PING-BOOM). I was over-swinging and off balance but when I caught it right and the ball was soaring away on a tailwind with the echo of the cannon in my ears it was pretty impressive.

[1] For some reason I’ve spent a lot of thought on what music would be on Tiger Woods’ Ipod. For instance I am certain that he has some Hootie and the Blowfish. I also think he has some stuff that was once gansta rap that is now mainstream: say Tone Loc’s “Funky Cold Medina”. I also imagine that he would have some music made after 2010 to show that he’s a bit hipster (like most hipsters he’s had an on/off relationship with facial hair). But it would have to be something super accessible like Vampire Weekend or Mumford and Sons. I also think that there’s some legacy Elin music on there. I’m guessing Sigur Ros. And now that he’s hooked up with Lindsay Vonn has some of her music ended up on Tiger’s Ipod? If that’s the case you know she has some early John Mayer (until he became Mr. Kiss and Tell) and almost every Jack Johnson song.

[2] The Sports album alone had 4 top ten hits and was the number 2 album on Billboard chart in 1984 behind Thriller.

[3] The other piece is Tchaikovsky’s 1812 Overture, which is background when Carl Spackler is blowing up gopher holes and half of Bushwood in Caddyshack.

[4] By the way, they played Stairway to Heaven as the last dance of every one of my intermediate school dances until my last eighth grade dance when there was an applause vote and Lipps Inc. Funkytown won the honor of being the last dance. I was appalled.