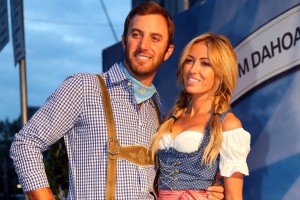 August 11, 2014: Long-hitting Dustin Johnson, an eight-time winner on the PGA Tour, said in a statement that he is taking an immediate leave of absence from competitive golf to “seek professional help for personal challenges.”

March 8, 2015: “It’s personal and frankly, it’s not really anybody’s business.” Dustin Johnson after his victory at the WGC Championship at Doral.

We talked to some acquaintances of Johnson, all of whom wanted to remain anonymous so as not to jeopardize their relationship(s) with Johnson, about what triggered the leave of absence. These are direct quotes from those conversations:

“Paulina Gretzky is a very difficult woman to be with. I mean, yeah, she’s got this killer body with the super long legs and a great smile. She comes from this good family but her dad, well, everybody calls him “The Great One”. How do you please someone like that? You meet the parents and you realize that the expectations are sky high to fit in. You’re not the Great One, because there is only one Great One, and it’s her dad and you’re trying to take his little girl away from him.

She also doesn’t seem to realize that being with her in public can be demoralizing for a man. She is so smoking hot and Dustin is okay looking but there’s only so much facial hair you can grow to cover that face. She was on the cover of Golf Digest in white yoga pants and she doesn’t even golf, really. Can you imagine the pressure dating a woman like that? Poor guy.”

“DJ gave one of the worst karaoke performances I have ever seen. He tried to sing MacArthur Park, which is one of the most difficult songs to sing. Even Sinatra absolutely butchered it. So I’m not sure what he expected. You don’t come out of that looking good, ever. But he had a few pops and then he started in but really slow and melodramatic. And he comes to the climax, you know, “someone left the cake out in the rain and I’ll never have that recipe again, blah, blah, blah” and everyone starts laughing. All the other players, the girls, even the caddies. The caddies are just dying. So what does he do? The next day he says he needs to take a leave of absence, hires a singing coach, starts exercising his throat. We’ll see. If he can come out of this and do a decent Hey Jude I think it’s a success.”

“Dustin Johnson is not a very good cook. He hit rock bottom late last summer when he burnt two pieces of toast. The toaster was set to 4, which is generally his preference for bagels, but the toast cooked more quickly than bagels. It was a total disaster. He tried to scrape the burnt surface off the toast but it was too far gone. The last thing I remember from that day was him standing over the sink with a butter knife and the toast. And he’s just scraping and scraping. And then he just started weeping. Tragic.”

“It was blow. No doubt about it. Think about it. His name is Dustin Johnson. That sounds exactly like a name a coke dealer would make up as his pseudonym. The guy has the perfect name and the perfect game. Go Dustin!”