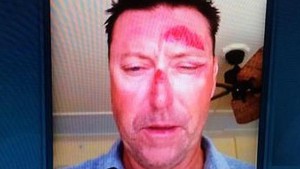 Watch Your Back at Waikiki Wine Bars

A heated confrontation between PGA Tour veteran Robert Allenby and his caddie during Thursday’s first round of the Canadian Open led to a contentious midround split, with Allenby having a fan jump in to caddie for his last nine holes.

Allenby’s caddie Mick Middlemo was quoted on ESPN.com: “He said, ‘I can’t believe this fat [expletive deleted],’ loud enough for everyone to hear. There’s a lot as a caddie I can take but a personal attack like that. … If this was an office in any country in the world, that would be considered bullying. … I can take it if you call me the worst caddie in the world, tell me I’m horrible at picking clubs, but there’s a line you just can’t cross.”

Earlier this year, Allenby was involved in a strange off-course incident in Hawaii. Allenby’s caddie, Michael “Mick” Middlemo, told the Golf Channel that the 43-year-old, four-time PGA Tour winner spent Friday night at a wine bar in Waikiki when he was abducted, placed in a car trunk, beaten up and driven 6½ miles away.

According to the report, Allenby said he was robbed of all his cash, credit cards and cell phone. “You think … that happens in the movie, not real life,” Allenby told The Associated Press at the time.

“I’m just happy to be alive.” Allenby posted a photo on his Facebook account showing a facial injury that he said came from being thrown in the trunk of a car.

“I don’t know what they hit me with between the eyeballs, whether a fist or a baseball bat,” he said then. “Whatever it was, it hurts.”

Opening round of the Canadian Open

“That was some great advice on 1.”

“Did you? Did you think the wind would hit it?”

“Did you have to hit a flop from 3 inch rough to the short side?”

“When I said brainiac, I was being facetious.”

“Oh. Okay. What’s ironic about that is that I’m actually smart enough to know when someone is being facetious.”

“That’s not irony, you idiot, that’s more like a contradiction to an assertion.”

“Oh, maybe you’re right. Let me see if I can use irony correctly, boss…is it ironic to be kidnapped from a wine bar? Is that irony?”

“Give me the putter.”

“Why not? Do you not have your wallet? Did all your cash get stolen in some weird kidnapping slash assault?”

“Do you ever wonder would it be like to be a golf club?”

“Have you wondered what it would be like to be a golf club?”

“No. That’s a weird question.”

“Well, you’ve been hit and thrown in the trunk of a car. So…”