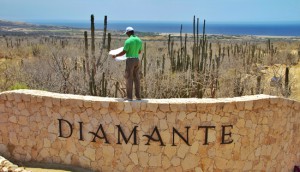 Golf courses in Cabo San Lucas are really good. Of course, you have Nicklaus. His Cabo del Sol set the bar but his new entry, Quivira, is at least as good. You should really go to the website and see some of the pictures and then delete your browsing history, it’s golf porn. The impressive lineup in Cabo includes: Querencia (Weiskpof), Palmilla (Nicklaus), Diamonte Dunes (Davis Love III), Cabo Real (Robert Trent Jones Jr.) and since Dec 2014 you can add El Cardonal to the list. El Cardonal is the very first Tiger Woods designed golf course. The course is the sister course of Diamonte Dunes which was rated the best course in Mexico by Golf Digest in 2012. You would think that this is a big deal. Every thing Tiger does is a big deal, right? Well, it’s not really a big deal. It’s a really good course. But it’s not quite in the class of the best courses in Cabo. And, except for the pro shop, it’s strangely low key.

About 20 minutes north of Cabo San Lucas you make a left turn and there’s a mile or so drive up a rural Mexican road with potholes and patched pavement. But after the Diamonte sign and guard gate, the road transforms to fresh, smooth blacktop. Of course, there’s valet parking. The proshop, with double life-size glitzy pictures of Tiger, Rory and Michelle Wie, all Nike clients, would seem more appropriate in Vegas. The merchandise is all overpriced Nike gear and clothing. I needed some shorts but the ones I liked were $110. They contained some high tech performance fabric that is probably unnecessary unless you have an issue with over-perspiration or you live in Phoenix. Oddly with all the Nike stuff they only had Pro V1s available when I bought balls.

I hired a caddy, Alphonso. We were the last “group” of the day. It was going to be just Fonzie and me behind a foursome. That sounded great. Plenty of time to take some pictures and try different shots and putts. I also decided to walk since we would be in no hurry. That decision was met with some surprise but encouraged by the staff. 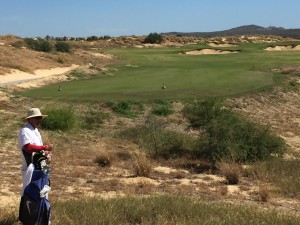 How did the course play? Very interesting. There were greenside swales, false fronts and driving chutes that would kick your ball forward if you hit them right. My guess is that the more you played El Cardonal the more familiar you would become with the sucker pins, the backstops and the odd putting breaks. You would know where to miss and when to be aggressive. Members probably clean up when they bet against their guests.

As you would guess at a Baja course, sand traps and waste areas are a big part of the design. On the 12th hole, there’s a risk-reward carry over a waste area. I hit a pretty good drive that cut towards the fairway but smacked into a lonely, large saguaro cactus on the left edge of the fairway. After I chipped blindly (Fonzie was busy, I guess) to get back in position, I hit a cutting 8 iron that didn’t stay on the podium green and kicked down a swale to the right. I missed a ten footer that should have broke but didn’t and carded a double that felt more like a bogey.

Fonzie definitely earned his keep when he recommended the homemade jerky that was available at the comfort stations. He also had the best call of the year by anyone (it’s early). He suggested adding fresh squeezed lime juice to the jerky…really damn good! I pocketed four mini packets of jerky at the first comfort station (cleaning them out) and another five or six packets at the second; my wife loves jerky and I figured I could use them as a token for abandoning her for a day. Fonzie also helpfully pointed out a Roadrunner on the third hole. 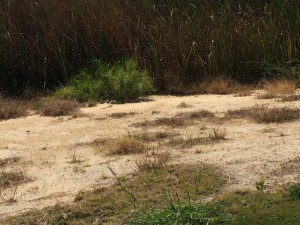 You can see the Roadrunner there, right? At the base of the bush. I don’t really take good pics.

I liked Tiger’s first course but I’ll admit I was a little disappointed. It has ocean view holes but not ocean front. The condition is really good but it’s not perfect. There are a lot of good holes but there’s not one signature hole that drops your jaw. I shot 84 but didn’t lose a ball. I faced a variety of obstacles and had to think my around the course. And I had Fonzie. Although I was disappointed, I don’t know what else I could have wanted.