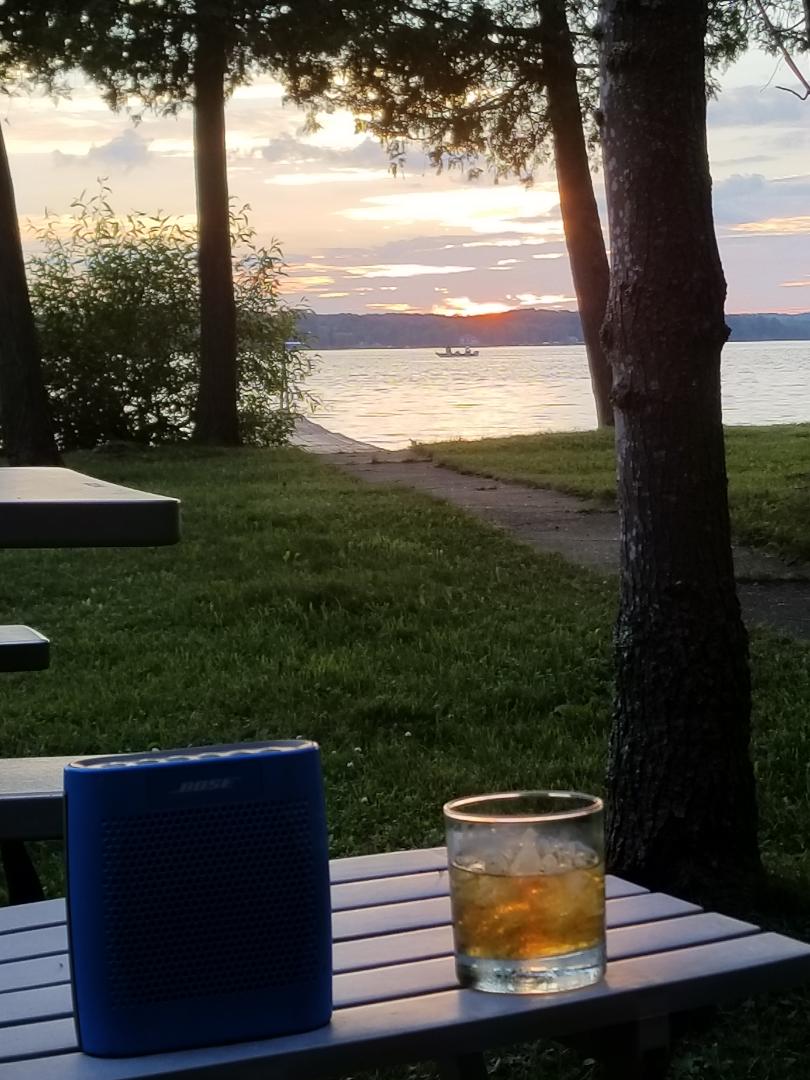 Recently my cousin invited some of the family to his cabin on Lake Bellaire about 45 minutes north of Traverse City, Michigan. The first night we had dinner in the town of Bellaire where Short’s Brewery is located and he mentioned that Bellaire is having a “moment”. Short’s had repurposed a closed down hardware store and made it into a sprawling brewpub with about 25 beers on tap (each named after a song by the jam band Ween) that is now destination dining for the area. Along with the brewery there is also a hard cider tasting room that opened recently, a BBQ food truck that sells out quickly and extensive well-maintained single-track mountain biking trails north of town. The sleepy destination that I remember from a previous visit five years ago was transformed. Although there was no sushi to be had and they can’t seem to cook fish medium rare, my cousin was right, Bellaire is having a moment.

And from Bellaire you can take great day trips. Traverse City is about 45 minutes away. They have the National Cherry Festival in early July. This year Pat Benatar and Loverboy are headlining! The Blue Angels will be making flyovers. The quaint downtown, on picturesque Grand Traverse Bay, has really good restaurants and shopping.  The director, Michael Moore is a local and founded a film festival that starts in late July.

On another memorable afternoon, we piled in my cousin’s minivan and headed north through the beautiful Lake Michigan coast cities of Charlevoix and Petoskey, then further north through a 20 mile stretch of road called the Tunnel of Trees which my cousin talked up so incessantly that finally his son deadpanned, “This better be good.” And it was! We ended up at a funky polish restaurant on a stunning bluff above Lake Michigan called the Legs Inn. We ordered pierogis and cabbage rolls and kielbasa. I had the well-seasoned but overcooked walleye. On the way back we watched in wonder as, about a 100 yards ahead of us, two black bears tentatively crossed a deserted backroad we had to take as a detour.

And since this is a golf blog you know I’d get to the links at some point. The Shanty Creek resort in Bellaire has 4 18 holes layouts of varying degrees of difficulty. I played The Chief course one drizzly afternoon since the weather was not good for watersports that day. I got around 13 holes of the parkland course with surprisingly slow greens by myself in about 2 hours.

However, we saved the best for last. The last two days of our visit were spent at Arcadia Bluffs ranked 13 on the Top 100 US Golf Courses you can play. The course is located a little over an hour south of Traverse City in the “town” of Arcadia, population 291. The resort has a lodge, The Dining Room for fine dining and The Lakeview Room for pub fare. We paid the modest upcharge for a lakeview room because well, you just should. We arrived just after noon for my 1:30 tee time and were allowed early check in. Perfect for my wife who wouldn’t be golfing. The vibe on the course was a little stiff. No cell service on the course, by intent and absolutely no music, which I totally blew off on day two. The starter handed me a green repair tool and since I was smoking, an ashtray that fit in the cup holder. I was paired with three golfers from Alabama, Tony, Mark and Mike, who had an air of Southern hospitality but seemed slightly suspicious of this Californian. Tony was wearing a wind shirt from some Trump course. And while they occasionally asked about what I did or what I was doing there, they seemed to have little interest in the answers. And while I was drinking a local beer called All Day Session, well, all day, none of those uptight Republicans had a single beer.

The course is very strategic.  Although I think the forecaddie got a little over strategic, for example, suggesting to leave it short and left on the 15th hole and just watch it run out to the back right pin. After the other players in the group did just that and every shot checked up and never made it to the pin, I tried a little more club and ended up long, left and dead. There were definitely places where you could use the slope of the green to work the ball to the hole. I went long on the 11th and chipping back, used the slope on the short right to backstop my chip. On the 14th I hit it a little long and right and the slope kicked it back toward the pin, so close I made a birdie.

Of course, Arcadia Bluffs is in great shape with groomed bunkers and lightning greens however it looked like the greens might have been a bit dry as they had someone hand watering on the second day I was there. The course reminds me very much of the Puget Sound course Chambers Bay. 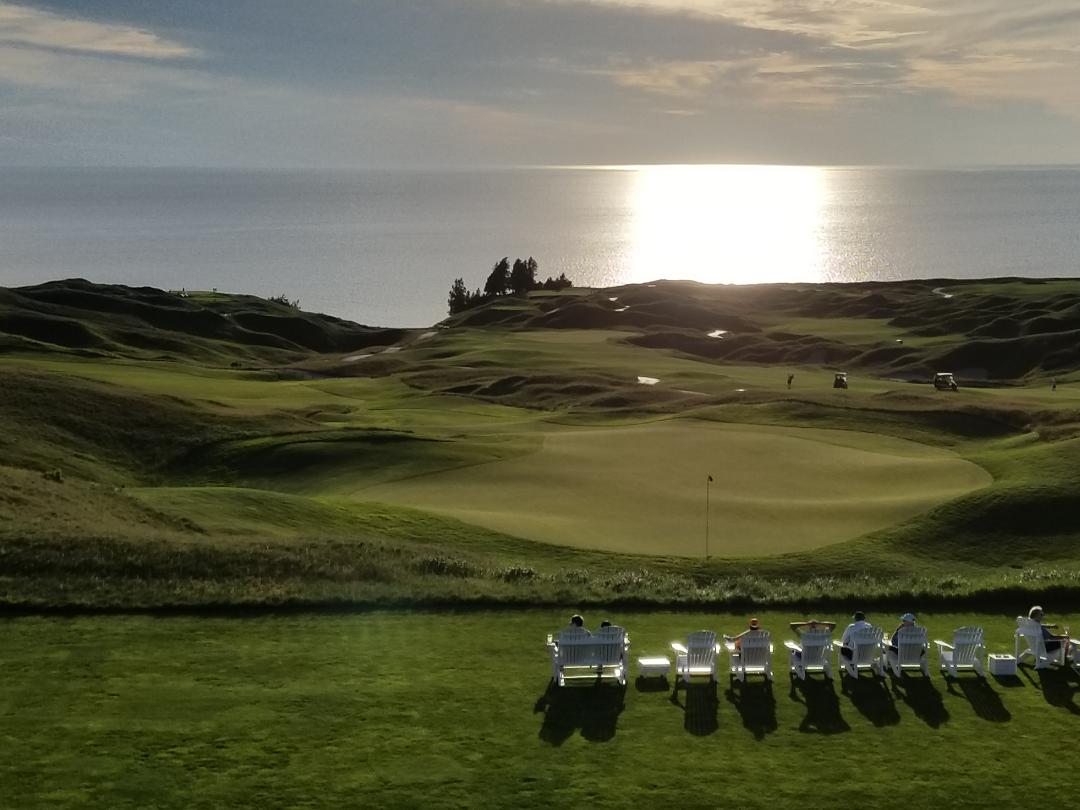 We ate at the Dining Room that night, where we found the food excellent for Michigan and really good for California. Even though it wasn’t the Lakeview Room it also had postcard views of Lake Michigan.  I ordered a signature cocktail, The Cucumber Fizz, which was way too sweet for me.  I sent it back and got a Woodford Old Fashioned, which was just fine. We scarfed down the delicious Morel mushroom appetizer with asparagus and a poached egg, followed by the Mayport salad with green beans, lobster, cherry tomatoes and lemon gorgonzola dressing. My wife had the New York Strip for her entree, which was a little tough. I ran into my playing companions in the restaurant who still weren’t drinking. I’m rightly suspicious of golfers who don’t drink. They had scored a round at the close-by Crystal Downs the next day. Crystal Downs is #12 on Golf Digest’s Top 100 US courses and our caddie talked it up all day. I was subtly hinting that we should keep the group together for another day. Maybe too subtly because they didn’t pick up on that or maybe they were still suspicious of me.

We finished the stay by dining at the casual Lakeview Room that, after half a dozen loud-talking flush-faced golfers left, was actually sort of intimate and boasted an equally stunning view of Lake Michigan and most of the course. We toasted the end of our Northern Michigan vacation with sparkling wine, a little flush-faced ourselves.