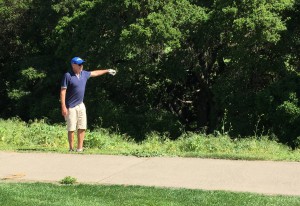 I’ve had various working titles for this piece:

The Unnecessarily Penal Rules of Golf

You Can’t Drop It There

Hey, Is This a Penalty? Yes

Something Seemingly Simple Made Complex

All those work but The Stupid Rules of Golf is ironically succinct and simple so I used that to make a point. I’m going to break down the stupid rules into a several categories. First category:

The Insult to Injury Rules

“Rule 14-4 If a player’s club strikes the ball more than once in the course of a stroke, the player must count the stroke and add a penalty stroke, making two strokes in all.”[1]

If you’ve ever hit the ball twice on one swing you know this usually happens on chunked short pitches. You hit well behind and under the ball, it pops up weakly and your club following, strikes the ball again sending it lord knows where. Is there really any reason to penalize the chump who does this? Said chump has only attempted one stroke. And after the second hit the ball could be anywhere but usually it’s right in front of the chump. The result is essentially two strokes added to his score and he’s right where he started.

If you’re not the chump, the sound of the double hit is great. First you hear the soft thud of the chunk and then right as the chunk registers in your head you hear the click as the club hits the ball on the follow through. Then somebody in the group invariably says, “Ohhhhh, He T.C. Chen-ed it.”[2]

“Rule 19-2 If a player’s ball is accidentally deflected or stopped by himself, his partner or either of their caddies or equipment, the player incurs a penalty of one stroke.”

This usually happens when you’re in a bunker. You take a nice swing, the ball pops up, and uggh, you caught it a little fat, it catches the lip and rolls back to the bottom of the bunker and hits you right on the foot. Is that a problem, you wonder? You’ll be glad to know you violated Rule 19-2.

Now, I can see that you shouldn’t be allowed to purposely stop your own ball that is about to roll into a lake.[3] But the rule says “accidentally” so there’s really no advantage gained if your ball hits you accidentally, rub of the green. In the case of your ball hitting you in the bunker, you’re still in the bunker and you get a one stroke penalty and you’re right where you started two strokes later.

During a stipulated round, a player must not:

Let’s say you ask someone in your foursome, “Should I hit an 8 here?” or “Do you see that breaking a little right?” or “What’s the best time to go Bed Bath and Beyond on Christmas Eve?”[4] Uh oh, you just violated Rule 8-1. Or if you say to another member of your foursome, “There’s a creek over that ridge. You might want to lay up.” Let’s see. The first sentence is okay. You can identify obstacles without violating the rule. But the second sentence is a two stroke penalty and stop being an a-hole. As you might have guessed there are multiple decisions concerning this Rule as it seems vague and unenforceable. For example, Decision 8-1/10 says it’s okay to look into a competitors bag to determine which club your competitor used on a stroke. But 8-1/11 says you cannot remove a towel that is covering your competitors clubs to determine club selection. Who are these people and can I make sure I never have to play with them?

If a ball is out of bounds, the player must play a ball, under penalty of one stroke, as nearly as possible at the spot from which the original ball was last played (see Rule 20-5).”

This is the infamous stroke and distance penalty. You not only get a one stroke penalty but you also have to go back to where you hit your last ball. There’s really no reason for this. They can easily make this similar to the drop procedure for a lateral water hazard, but this rule forces you to go back to where you played your last shot, making the walk of shame, holding up play. And if you didn’t hit a provisional and you’re not playing in a tournament, how many of you actually trudge back to the tee? Cheaters!

A thorough discussion of different drop scenarios is beyond the scope of this article however, I’ll try to summarize without putting you to sleep:

Option #1: Two club lengths from where it crossed the margin of the hazard, no closer to the pin.

Option #2: Two club lengths from “a point on the opposite margin of the water hazard equidistant from the hole, no closer to the pin.”[5]

Option #3: Replay from where you hit your previous stroke.

Option #1: Keeping the point where the ball crossed the hazard and the pin in a line you can drop as far back as you want along that line, no closer to the pin.

Option #2: Replay from where you hit your previous stroke.

Option #1: Two club lengths from the spot of the ball, no closer to the pin.

Option #2: Keeping the spot of the ball and the pin in a line, you can drop as far back as you want along that line, no closer to the pin.

Option #3: Replay from where you hit your previous stroke.

Option #1: Replay from where you hit your previous stroke.

All of these require a one stroke penalty.

(i) that is not nearer the hole, and

(ii) where, if the ball were so positioned, no interference by the condition from which relief is sought would exist for the stroke the player would have made from the original position if the condition were not there.”

Are you still with me? Thanks. If I were reading this I would have stopped reading about two paragraphs ago. And all that doesn’t even cover rules about dropping in a hazard, which is what happens when you hit it out of bounds from a hazard. Here’s a rule for that: Pick it up.

So as a favor to the USGA I’ve developed some language to supplant the existing clause(s) on drops:

If you hit your ball into any hazard or cart path or bunker or ground under repair or out of bounds or burrowing animal hole or tree or beer cup or man cleavage you have three options:

And there’s this decision:

Q.A player removed with his hand an embedded acorn on his line of putt. The acorn was not solidly embedded, so it was a loose impediment. The player then repaired the depression in which the acorn lay. Was the repair of the depression a breach of Rule 16-1a?

And there, in a nutshell (literally), is why a lot of people don’t enjoy golf.

[1] Note that all the text in quotes is copied from the USGA website. All of the italics and font coloring are theirs.

[2] TC Chen took an 8 on a hole in final round of the 1985 US Open when he hit the ball twice on one swing. He lost to the eventual champion, Andy North, by one stroke. His Wikipedia page says, “As a result of this shot, he is sometimes referred to as “Two Chip” Chen.” What kind of karmic curse do you live under when your initials refer to the most infamous moment of your life? It would be like being named William Jefferson Clinton. The USGA even published a video of the “two chip” on YouTube to show an example of Rule 14-4. Way to go, USGA…classy.

[5] I had to read that sentence three times before I semi-figured it out.

2 Responses to “The Stupid Rules of Golf”