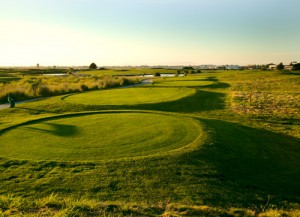 Getting Away From It All!

The Metropolitan sounds like a cocktail. It’s a relatively good name for a golf course, given that some golf courses are lamely named after non-descript land features like The Ridge (Auburn, CA) and The Ranch (San Jose). Or they’re named after descript land features like Diablo Creek (Concord, CA) and Poppy Ridge (Livermore, CA). Or they’re named for things just lying on the ground like Crooked Stick (Carmel, IN), Pine Needles (Southern Pines, NC) or Tan Bark (I just made that one up).

Located right next to the Oakland Airport, the Metropolitan is a true links course that provides a reasonable golf experience for the money. Their website says: “What do you look for in a golf course? A chance to get away from it all? Excellent putting surfaces? Good turf? A place where you won’t lose a dozen balls? A management that values walking? A fast pace of play? Service? A place that honors the traditions of the game? Fun?”

Well, let’s look at each of those claims. A chance to get away from it all? Well, it’s got the Oakland Airport on the north and west side, busy Doolittle Dr. on the east edge and the San Leandro Rifle and Pistol Range on the south side. So if your idea of getting away from it all includes low flying commuter jets and gunfire, well, my friend, you have found it here! Excellent putting surfaces? I would call them very good greens with infrequent rough spots. Good turf? The turf was in good shape when I played. But that’s like saying a tree has nice leaves. It should; it’s a tree. A place where you won’t lose a dozen balls? Except for the narrow eighth and ninth holes and the few lake holes that is mostly true. A management that values walking? It is a walkable course (flat with close together holes) and they don’t require golf carts (no course should) and they give you a break on the price if you walk (no course shouldn’t). So I’d say they value walking. A fast pace of play? I have played when it did take close to six hours to play but last time I played we got around in a little less than 5 hours and when we fell behind on one hole due to two lost balls in our group the marshal was on our ass quickly, maybe too quickly for my taste but better early than never. Service? Everyone was nice and helpful except for the marshal who was merely helpful. A place that honors the traditions of the game? Maybe. I lost $4 on a six-six-six skins game and drank two tall boys last time I played so I honored a couple of traditions there. Fun? Yes. It is a fun course. Johnny Miller and Fred Bliss co-designed this track. The other local Johnny Miller co-design is The Bridges in nearby San Ramon and on the fun scale it ranks a little above doing your taxes when you know you’re not getting a refund.  The Metropolitan is the anti-Bridges. No superlatives like best, worst, longest, etc. really apply but it is fun.

2 Responses to “A Quickie Round of Golf In Oakland”