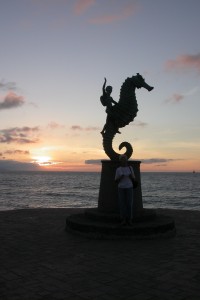 Guaranteed sunshine, lush green mountains, a turquoise sea and enough margaritas to stave off scurvy are a few of the reasons why I’ve made Puerto Vallarta my home-away-from-winter for the past seven years. But I am also a self-confessed golf addict and PV is arguably one of Mexico’s top golf destinations. 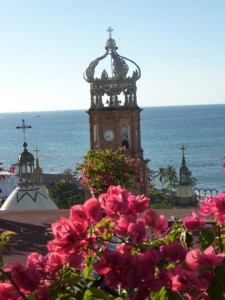 Located at the south end of Bucerias, Los Flamingos is the best bargain in the area. Designed by Percy Clifford, Flamingos’ unique fairways have a bit of everything—from plenty of forced carries and elevation changes to resident crocodiles. Players can save  almost 50% on greens fees by purchasing a package of five or more. The club also provides free morning coffee and afternoon shuttles to your PV hotel. I’ve discovered that I can take the “shake, rattle and roll” local bus up to the course for about a dollar, instead of a taxi that costs $25 each way. When you want to play often, this represents a significant saving.

Sunday night is fiesta night in the central Vallarta, so after golf my husband and I  strolled along the malecon and discovered a lively band playing in the Plaza de Armas, PV’s main square or zocalo. Seniors dressed in their finest were dancing, teens were flirting, parents were buying balloons and ice cream for their kids. From one of the many street vendors we bought barbequed corn on the cob slathered with chili/lime butter and enjoyed being part of the pulse of vibrant Vallarta.

Just as the sun was setting, a bunch of whales began leaping around and about the Bay of Banderas. Later, we watched a folkloric dance spectacle in the open-air amphitheatre with the waves as background music. Just think,  I could be back in Toronto shoveling snow! 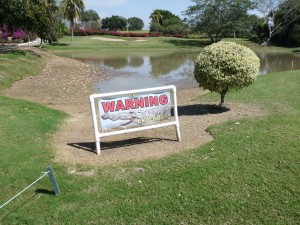