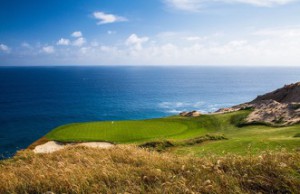 The towns of Cabo San Lucas and San José del Cabo act as bookends for the 33-kilometre corridor of hotels and golf courses known as Los Cabos on Mexico’s southern tip of the Baja Peninsula.

Hollywood stars such as Bing Crosby and John Wayne, lured by the legendary sport fishing, initially put Los Cabos (nicknamed Cabo) on the tourist map back in the 1950s. And while fishing still draws avid anglers to what’s called “marlin alley,” Los Cabos has also become one of the world’s top golf destinations. Several top-notch facilities presently dot the strip with more on the way by acclaimed designers who happily compete for the opportunity to ply their art on such a stirring canvas, where the desert coastline meets the Sea of Cortez.

Certainly the most spectacular new course is Quivira. I was there when Jack Nicklaus cut the ribbon on December 4, 2014 and officially opened his epic, long-awaited layout ten minutes from downtown Cabo San Lucas.

Nicklaus has become a very prolific architect. To date, he has been involved in the design of 290 courses open for play worldwide (his firm has built another 90). Quivira, Jack’s sixth course in Los Cabos, is Nicklaus Design’s 23rd in Mexico. Golf Magazine named him “architect of the year” for 2015.

Nicklaus recalls his early days in Los Cabos: “We used to come here in the ‘60s with a tee shirt, swimming suit, a pair of sandals and 20 bucks and stay for a week. Then all of a sudden we started doing golf down here and it just exploded—the real estate values, the golf courses and the developments. When we came in ’86 to do Palmilla, there was nothing here. My friends say I’m the guy who ruined Cabo. But what we really did was introduce the game of golf to Cabo.”

With a view of the sea from every hole, Quivira has more oceanfront exposure than any other course in Los Cabos. All 18 fairways feature panoramic views of the Pacific. From December to March you are likely to spot whales leaping in the wild blue yonder. Because the terrain is so dramatic, the course looks tough, but Nicklaus deliberately designed it to be user-friendly and pleasurable for the higher handicapper, yet still challenging from the tips for the pros. The layout with four tee placements, ranging from 7,139 to 4,326 yards (par 72), starts at sea level, scales cliffs more than 275 feet above the surf, spans canyons and arroyos, meanders through dunes and desert, and returns to the sea at the finish. When the wind howls it will greatly increase the difficulty factor.

The 74-year old Nicklaus pulled out all the creative stops at Quivira, agruably the most audacious and eclectic course he has ever built. When asked to predict how Quivira will impact his legacy, Nicklaus says, “I think some people will say it’s the most spectacular and best golf course they have ever seen and others will say, ‘You have got to be kidding.’ I don’t think there will be a lot of middle ground.” If you look at the game of golf as having a fun experience, and playing in an exciting and beautiful place, you will absolutely love it. From start to finish, I’d say Quivira has as much pace, variety and spectacular beauty as any course I’ve ever designed.”

But a few pictures are worth way more than a thousand words…so have a look. 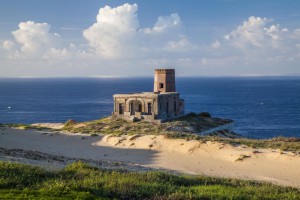 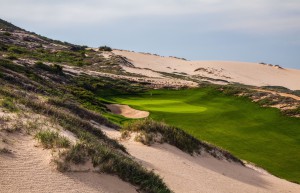