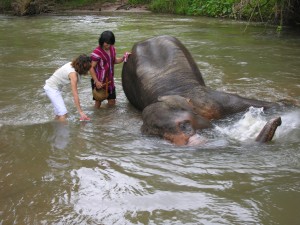 I am knee-deep in the river giving Mae Noi, a 20-year-old pregnant elephant, her bath. I am gently brushing her adorable freckled ears and she seems to be loving it. Pong, her mahout (trainer) informs me that each of the pachyderms has his/her own personality. Mae Noi is afraid of mice!

The elephant is revered in the Buddhist religion as a symbol of protection. It has also played an important role in Thailand’s history and economy. Centuries ago, royals and warriors rode them in combats against the Burmese. More recently, elephants hauled lumber from Thai jungles. But when the teak exportation business dwindled, many pachyderms and their mahouts became unemployed. Fortunately, they are now finding new careers in tourism.

Pat Theerapat, owner of the Patara Elephant Farm, near Chiang Mai in northern Thailand, informs me that the income from one elephant supports up to 15 people—from the grass and banana growers to the mahouts and their families.

After the bath, Pong shows me how to climb aboard Mae Noi’s neck and teaches me the various spoken commands to control our ride to a local Buddhist temple.

Pat is passionate about the health and happiness of his elephant family and eager to teach we “day trainers” as much as possible about their care—from detecting their moods to skin care.

Our idyllic day ends with a jungle ride to a waterfall, a picnic lunch (spicy noodles for me; tamarinds for Mae Noi) and another frolic in the river. I feed my new friend some ripe bananas and wish her well in her new career and the upcoming birth of her baby. I hope that old adage that “an elephant never forgets” is true. 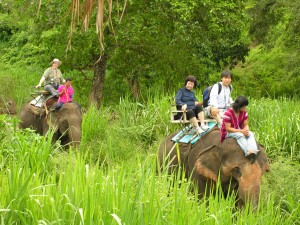