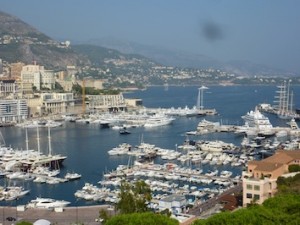 Think Monaco’s Côte d’Azur and what comes to mind? La vie en rose. Bronzed topless babes flaunting it on the beaches. High rollers in flashy Ferraris racing down the vertiginous corniches to Monte Carlo’s roulette wheels. Glamour and glitz. Whenever I think of Monaco I am reminded of a musing by the nineteenth century French poet and bon vivant, Charles Baudelaire: “Decadence must be considered the high point of civilization.”

Even though your fling in Monaco can (and should) be divinely decadent, I’ve found ways to both splurge and save.

When it comes to location, location, location, the Fairmont Monte Carlo has been dealt a Royal Flush. The property, perched above the sea, has the ambiance of a luxurious cruise ship. The hotel entrance is situated at the famed Formula One Grand Prix’s famous hairpin turn, plus it’s next door neighbour is the world’s most famous casino. On the seventh level you can hang out at the swimming pool with views to the port below or check into the new Willow Stream Spa for some pampering Riviera-Style. It was recently awarded “best hotel’s spa in Europe by the Prix Villégiature.”

Fairmont’s Scent…sational package (€459 per night, minimum two nights based on double occupancy) includes a VIP jaunt to the neighbouring medieval town of Eze. You’ll have a tour of the famous Galimard perfume factory (the original one is located in Grasse) and the chance to work with Galimard’s “nose” to create your own signature perfume. You compose your liquid elixir at a desk, called an organ, with three tiers of brown bottles filled with oil extracts from plants and botanicals. With the help of my nose, Sandra Dziad, I created “Anita” in a bottle. To make a perfume you must build it in three levels: back, heart and top notes. My final masterpiece contained 15 different scents, including chocolate, floral musk and bergamot. Ms. Dziad, who has worked with Chanel and Jean-Paul Gaultier, seemed pleased with my olfactory offering, pronouncing it “fresh, natural and calm with a powdery base.” We toasted “Anita” with a glass of champagne 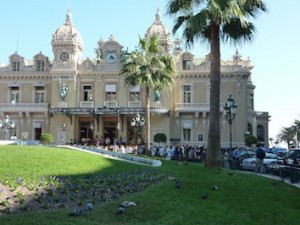 Café de Paris, the landmark Belle Époque brasserie, across from the casino, is the place for a chic rendezvous from breakfast to the wee hours.  Indulge in one of their outrageous gelato confections. I recommend the Peach Melba or Banana Royale. If you really want to fit in, tote a poodle in a Louis Vuitton case and wear matching designer shades.

Calling all high and low rollers

Even if you’re not a gambler, you must spend some people-watching time at the Monte Carlo casino, another Belle Époque wedding cake of a building created by architect Charles Garnier (who also built the Paris Opera House). You might not spot James Bond but there will be no lack of designer-clad glamour girls and tanned playboys. Entrance is €10, plus your passport.

Just 18€ buys a double ticket for the Prince’s Palace and the Oceanographic Museum. Start in Le Rocher, the medieval heart of Monaco where narrow streets lead up to the Grimaldi Palace. A self- guided audio tour leads you through splendidly furnished suites, including a stately Throne room where there’s a lovely painting of the late Princess Grace, Prince Rainier and family.

At the Oceanographic Museum you’ll have the added bonus of viewing the Giorgio Armani-designed wedding gown and photos from the lavish matrimony last July of Prince Albert II and South African, Charlene Wittstock.

The museum and its research organization were headed by Jacques Cousteau until 1997. Rare fish swim in 90 glass aquariums and there’s a new shark lagoon where those creatures lurk amongst the coral reefs.

The best deal in town is the one-day pass (€3) for unlimited travel on all of Monaco’s bus routes. By taking them you’ll have a complete tour of the highs and lows of the Principality, plus mingle with the locals, called Monegasques, The pass is also good for the shuttle boat that goes from one side of the port to the other so you can have a close-up peek at the mega-yachts moored in the harbour.

Take the number six Fontvielle/Lavarotto bus to Monaco’s best beach and bask with the beautiful.

I like La Piazza (9 rue de Portier), a five-minute walk from The Fairmont. Sit inside or out on the terrace and enjoy friendly, unpretentious service (these waiters did not go to snob school) and traditional Italian food. Their homemade lasagna is excellent, as are fish dishes.