Costa Rican golf at its best: the 15th at Hacienda Pinilla

Contemplating golf in Costa Rica, I think of the Law of Comparative Advantage. Perhaps you remember it from Economics 101. Put simply, it suggests that things be done in the place where they are done best. You could, perhaps, grow rubber trees in Alaska if you were willing to invest enough in greenhouses and heating oil. But why would you? There are tropical countries much better suited to growing rubber trees.

Similarly, you can play golf on a Costa Rican vacation. But should you? Maybe you should reserve your time in Costa Rica for things in which Costa Rica has a comparative advantage, like spotting a Resplendent Quetzal. On my own recent trip, the peak experience came in a rain forest rather than on a golf course. After hiking for a couple of hours, our trail took us to a clear, cold stream flowing down a mountainside. There was a 10-foot waterfall and a deep pool. Best swim I ever had, and one of the pleasures for which Costa Rica has a comparative advantage.
Golf, in this light, is an exotic import to Costa Rica, It’s not as exotic as a rubber tree nursery in Alaska. But it’s not as natural as a links on the coast of, say,  County Kerry. 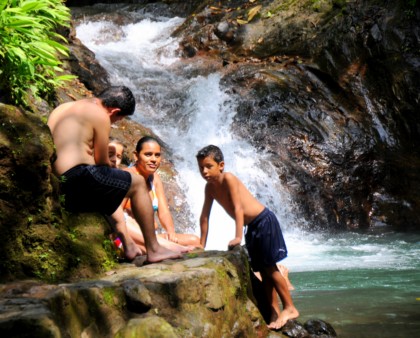 On top of that, there’s the pricing system for golf in Costa Rica. The courses charge different rates for different people. There’s an insider price for locals and members. And then there is the sucker–excuse me, visitor–price for occasional tourists. I played at Hacienda Pinilla with a fellow named Steve, who retired and moved to Costa Rica a year or two ago. As a member, he paid annual dues of $3,000 per year, or $250 a month. This entitled him to play as much golf as he wanted, and he played a lot. I, on the other hand, paid a green fee of $185 for my round. So my single round cost nearly as much as the monthly dues that entitled him to play a couple of dozen times. At Papagayo Golf & Country Club, members pay $25 a round. As a one-time visitor, I paid $100. Given the state of that golf course, $25 would have been fair.

I know that tiered pricing systems exist around the world. But they irritate me, and they seem egregious in Costa Rica.
That said, there are some golfers–and God help me, I am one–who need their fix during the winter. If they’re going to Costa Rica, they’re going to play golf. So the question arises, where? If you’re going to the Pacific Coast, here are four choices, ranked in order of preference. (For the full review of each course, click on the highlighted link.)
1. Hacienda Pinilla
A Mike Young design a few miles south of Playa Tamarindo on the Nicoya Peninsula, Hacienda Pinilla is a beautifully conditioned, wind-swept and challenging golf course, built on land once devoted to ranching. It’s part of a 4,500-acres complex that, thanks to the Great Recession, still houses way more iguanas and howler monkeys than people. Two holes play to the edge of the Pacific, which is a beautiful backdrop. But the best hole may be the short, tricky, inland par-four 10th. And the most fun may be the two par fives that are designed to play with the prevailing wind. Feel powerful.
There’s a hotel, La Posada, on the grounds of the Hacienda Pinilla complex. Some of the casitas and condos are rentable through sites like www.vrbo.com. There’s a big Marriott resort adjacent. Or you can stay at one of the little hotels in the nearby beach towns. Hacienda Pinilla accepts outside play.
2. Reserva Conchal
It’s hard to say which is the better golf course–Reserva Conchal or Hacienda Pinilla. Pinilla is windier, more open, and the contours are not as dramatic. Conchal has more ups and down in the terrain, more water in play, and less wind. The fairways are correspondingly a bit tighter. They’re about equally well conditioned, which is to say very well indeed. They both have top-notch practice facilities. I rate Hacienda Pinilla higher because it doesn’t try quite so hard to give you the impression that it’s doing you a favor to take your money. 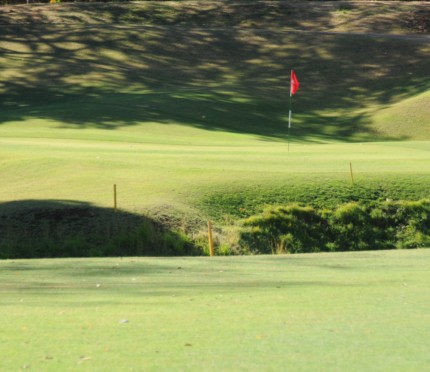 The second green at Reserva Conchal

Like Hacienda Pinilla, Reserva Conchal is part of a gated enclave.  There’s a Westin resort inside, and condos within the complex are for rent on sites like www.vrbo.com.  If you’re staying outside the gates, you have to call and email to get a tee time.

3. La Iguana
South of the Nicoya Peninsula, on the coast at a village called Playa Herradura, the Costa Rican climate gets significantly warmer, wetter and more classically tropical. The natural environment changes to a rain forest. And that’s the setting for La Iguana, a Ted Robinson, Jr. design that is part of a resort/condo complex called Los Suenos.
Steep, thickly forested hills drop abruptly to the sea in this part of Costa Rica. Robinson built his course in the narrow valleys between the major hillsides. Some holes go uphill and others come back downhill. Finally, Nos. 15-18 play on relatively flat ground near the beach. The course is tight and if you hit the ball out of play, it’s likely to be gone in the rain forest. La Igauana, probably because of the climate, can’t match the greenkeeping standards of Hacienda Pinilla and Reserva Conchal. The greens are grainy and the fairways can be scruffy. But it’s decent golf and it’s the only option on the coastal strip that includes popular destinations like Jaco and Manuel Antonio National Park.
The Los Suenos complex includes a big Marriott resort hotel and condos that are available for rent by the owners. There are lots of other hotels up and down this stretch of the coast, and La Iguana accepts outside play.
4. Papagayo Golf & Country Club
A country golf course laid out by its owners, a pair of Montanans named David Reynolds and Michael Mills, Papagayo would be innocuous if it were located in rural Montana and charged $30 a round. Unfortunately, it charges visitors $100. and it’s definitely not worth that.
The fairways are weedy and hard. The greens, which get some irrigation, are tiny. The design shows amateur flaws like fairways that kick balls into the tall grass.
There’s no lodging associated with Papapgayo, but you could play it by taking a cab from one of the hotels around Playa del Coco in northwestern Guanacaste Province. If you were desperate.