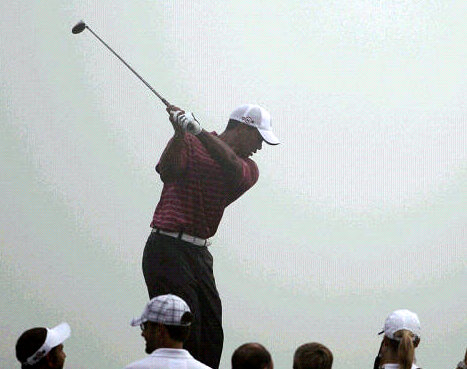 2)     When I do, I will book only afternoon tee times on the Straits course.

I am puzzled that, at least among my golfing friends on the East Coast, the American Club is rarely in the conversation when it comes to special destinations. I know groups that make it a point to get out to Bandon Dunes every couple of years. Groups go to Scotland, or to Ireland. They go to Pinehurst. In the winter they head for Florida or the Caribbean.

The American Club offers better golf than a lot of those places, it’s an interesting place, and it’s very convenient. From the East Coast, you can fly to Milwaukee in an hour and a half. From there, it’s just an hour or so up an interstate highway to Kohler, Wis.

Kohler is an old-fashioned company town, still dominated by the plumbing fixtures plant owned by the Kohler family. It’s neat, tidy, and prosperous, a reminder of an era when American was a great manufacturing country. It’s got an interesting collection of sidewalk art, placed there through the efforts of a member of the Kohler family who is more interested than sculpture than golf.

The resort hotel got its name because years ago the Kohler family needed a dormitory for immigrant laborers, most of whom spoke only German. In a paternalistic way, the family decided that the workers needed help learning English and qualifying for citizenship. So the  dorm was called the American Club, and the company offered classes in English and civics to the lodgers. The hotel nowadays offers luxury undreamed of by the original lodgers, but their memory gives the place a special atmosphere.

Then there’s the golf. The Straits course gets all of the attention, and it is visually arresting. But for my money, the best of the resort’s courses is Blackwolf Run. It has hosted a U.S. Women’s Open. It plays over and by the Sheboygan River and it’s a more classic Pete Dye design, with a lot of fairways set at angles to the elevated tees, challenging the player to pick the correct line for his tee shot and hit it there.  The remaining two courses, Meadows Valley and the Irish Course, are both good, but not quite as special as Blackwolf Run and the Straits.

I would write more about the Straits course, but I have to confess I have seen only two-thirds of it. When I played it, the conditions were very similar to the conditions faced by the tournament field on Thursday and Friday mornings. The course was shrouded by a dense fog that came in off Lake Michigan. It didn’t dissipate until my group was on the sixth hole.

A key difference between being a resort guest and being part of the PGA Championship is that resort guests don’t get to wait until the fog burns off. They play. A caddy points to something barely visible on the foggy horizon and tells the player to aim at it.  There’s a certain advantage to this. The player doesn’t see all the hazards that await him. He just tries to hit where he’s told to hit, using the club the caddy tells him to use. When I played, I did about as well on the first six holes as I did on the last 12.

Nevertheless, when I return to the American Club, I will ask for a afternoon time on the Straits. I’d like to see the whole golf course.