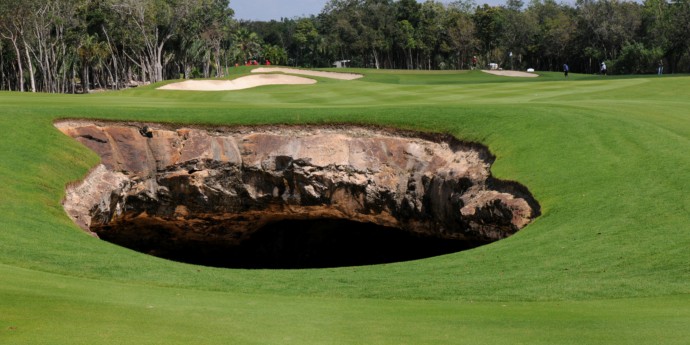 The cenote in the first fairway at El Camaleon

Smack in the middle of the first fairway at El Camaleon, on the Yucatan coast south of Cancun, there’s a cenote that says a lot about the intentions of  the course’s designer, Greg Norman. A cenote is a sinkhole, caused by eons of underground water eroding and washing away the soft limestone bedrock in this part of Mexico. The cenote on No. 1 at El Camaleon shows a wide mouth, a dry floor covered in gravel, and then drops away into a black hole that looks like it could lead all the way to China. It’s an impressive hazard. 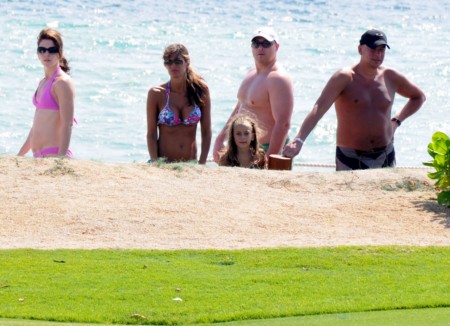 The gallery behind the green at No. 7

But it’s the cenote’s location that makes it a great golf course feature. The first hole is a par 5, 554 yards from the tips and 532 yards from the white tees. The cenote is roughly 300 yards from the back tee. This means that the bomber who wants to reach the green in two has to deal with it. His drive will be landing right around the cenote. But the average player, hitting from the white tees, almost certainly can’t reach it. He can aim right at it if he wants. On his second shot, only a miserable foozle will be at risk of falling through to the Orient.

This kind of thoughtful use of natural features can lead an architect toward golf’s Holy Grail–a course that challenges the pros and yet remains playable and fun for the duffer. It’s an ideal that is probably unreachable, like breeding a horse who can both serve as a pony at kids’ birthday parties and win the Kentucky Derby. But Norman has come laudably close at El Camaleon.

The course can be tough. It’s near the sea, so there’s always wind–sometimes a breeze and sometimes a gale. The fairways and greens often hug the edges of canals built to drain the lowlands of the Mayakoba resort complex. Nearly every green is designed to have a couple of ticklish tournament hole locations, on narrow or shallow segments, guarded by water or forbidding bunkers.  El Camaleon is the site of the PGA Tour’s Mayakoba Classic, and in this year’s playing the cut line was three over par. 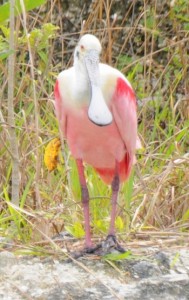 A roseate spoonbill peers into a canal near the course

On the other hand, I played the course the day after the tournament ended, and I can attest that for the average player (and my game is very average) El Camaleon is an enjoyable round of golf. There’s nothing extreme or tricked-up about the course. The turf is plush. Forced carries are easily manageable from the appropriate tees. There are many places where water or impenetrable jungle or even a limestone ledge impinge on the playing area, but the corridors are generally wide. It’s not hard to keep the ball in play. Though I didn’t come close to the mid-80s score my handicap suggests I should have had, that was primarily because:

a) I usually played away from pins tucked near hazards and frequently three-putted as a result; and

b) When I challenged a pin near a hazard, I generally hit the ball into the hazard.
At such times, the intent behind the name El Camaleon becomes clear. The course, like the eponymous lizard, can change color very quickly. What seems benign may be dangerous. The best example may be the par 4 sixth hole, a modest 389 yards from the back tee and 360 from the whites. The green is guarded by several steep front bunkers and the shot to it has to carry a canal. My drive was mediocre and the iron I had left was probably longer than it should have been. Foolishly, I went for the pin, which was back right. I came out of the shot a little and sliced the ball into the drink. I dropped and hit a lob wedge, again at the flag. It landed just a couple of yards short–in a bumker as deep as I am tall, taking up residence in a footprint. By the time I holed out, I had barely avoided double digits.
But, like the chameleon, the course immediately showed a different color. The 7th hole is one of two par threes that play to the beach. Fortunately, the wind was benign. A nine-iron to the green and I had a par and could tip my hat to the bemused spectators in bathing suits, standing just beyond the dune line on the Mayakoba beach. 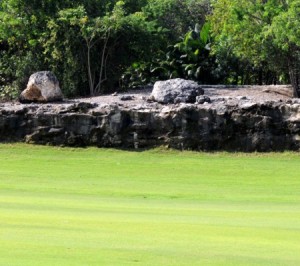 Mayakoba is an extensive resort complex, owned by a Spanish corporation. There are presently three hotels on the site–a Fairmont, a Rosewood and a Banyan Tree. They’re all luxurious, and from their balconies and private pools a guest can see a tremendous variety of avian life as well as the fairways of the golf course and the jungle around it.

On the day I played, I was able to have breakfast with John Cook, the Champions Tour player, who had been engaged by the Mayakoba folks to give a clinic and play a par-three hole with the resort’s guests. Cook had played in the Mayakoba Classic and missed the cut, but he was lavish, and eidently sincere, in his estimate of the course. “I think it’s Norman’s best,” he said.
By the end of the day, I agreed.