Both sand and grapevines can be hazardous at Viniterra

Playing in a shotgun start, my first hole at Viniterra was the benign looking, 137-yard par-three 3rd. I came up out of my tee shot and hit it into a front bunker. Caught too much sand on my second shot and barely got it onto the green. I had a 30-foot, uphill putt to save par. I stroked it. The ball climbed, climbed, stopped a few feet short, and then rolled back to my feet. By the time I escaped, I had started my day with a triple-bogey.

Thanks, Barton. That made me tingle with anticipation. 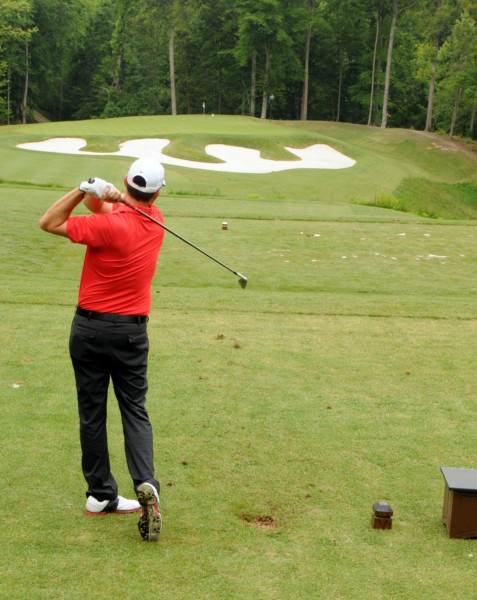 Tee shot to the par-three seventh.

Tuck, from Greenville, S.C., is a well-traveled golfer who recently bought Viniterra and added it to a portfolio of nine courses he owns in several southeastern states. He’s had some historical research done, and the research says that the golf industry’s recovery from a recession generally lags about three years behind the overall economy’s recovery. If that proves true, then the recession that hit golf so hard in 2008-2009 has probably bottomed out, and he will be well positioned to take advantage of a comeback that should start soon.

Viniterra, which lies about 20 miles east of Richmond, Virginia, could be a leader in the rebound. It was among the last courses commissioned before the bottom fell out of the golf market, opening in late 2009. It’s part of a complex that includes luxury housing and a winery. The developers plan to add a small hotel and a spa.

Rees Jones, with an assist from Greg Muirhead, did the golf course. I find Rees Jones to be a constantly evolving designer. Courses he built 20 and 30 years ago don’t much look like the ones he’s done more recently. Down the road in Williamsburg, he built the Golden Horseshoe Green Course at the Williamsburg Inn in 1991. Its holes are lined by mounds and earthen berms. But there’s nothing like that at Viniterra.

At Viniterra, Jones was given a a wooded piece of land that has a surprising number of gullies and hillsides, given that it’s part of the coastal plane between Richmond and the Atlantic Ocean. He responded by carving long, wide playing corridors out of the forest. The course can stretch to 7,725 yards from the back tees, but Jones didn’t think that length alone would make it challenging enough for today’s big hitters. He added dramatic, profuse bunkering at strategic points and some steep separations between tiers on the greens. The greens are big, but it’s easy to three- (or four-) putt if you don’t hit the correct area, as I found out on No. 3.

If there’s a Rees Jones signature design feature on Viniterra it’s probably the par threes shaped like an inverted Y. On No. 15, which can play as long as 212 yards, there’s a set of tees that force the golfer to play over a field of bunkers. There’s a second set of tees about 50 yards away that require shots of similar length, but from an angle that permits a duffer to roll the ball onto the putting surface. Jones liked the concept well enough that he essentially duplicated it on the 205-yard 17th. 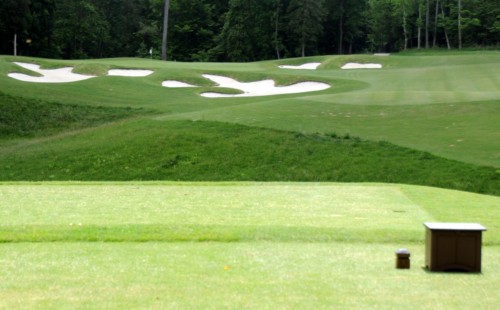 From this angle, the shot to the green at the 15th has to carry an array of bunkers.

For my money, though, the best hole on the course is the 9th, a par five that can play anywhere from 570 yards to 432 yards. Guarding par against the occasional player with Bubba Watson’s length, Jones forces the player who wants to hit the green in two to carry the second shot over a field of deep bunkers, then hit the correct portion of the green. But he kept the second shot from being boring for the player who tries to hit the green in the standard three shots. The fairway is bifurcated, and the player who lays up has to figure out how far to hit the ball to reach and stay in the second segment and avoid some grass bunkers and heavy rough. It’s a nice design touch.

Viniterra has been rated at 77.2 with a 147 slope from the back tees, but it turned out to be a manageable golf course. It’s fairly easy to keep tee shots in play. The greens are well-conditioned and putts roll smoothly. There are even a few lucky bounces to be found, when a hump in a green kicks the ball into tap-in range.

It compliments a growing list of excellent courses between the Atlantic and Richmond.  The state could make a first-rate golf trail that would include Mattaponi Springs, north of Richmond, Viniterra, Royal New Kent, the Golden Horseshoe courses at the Williamsburg Inn, and the Palmer and Nicklaus courses at Bay Creek, on the eastern shore.

Or, you could just play Viniterra. Like a new red wine, it’s a creation to savor.