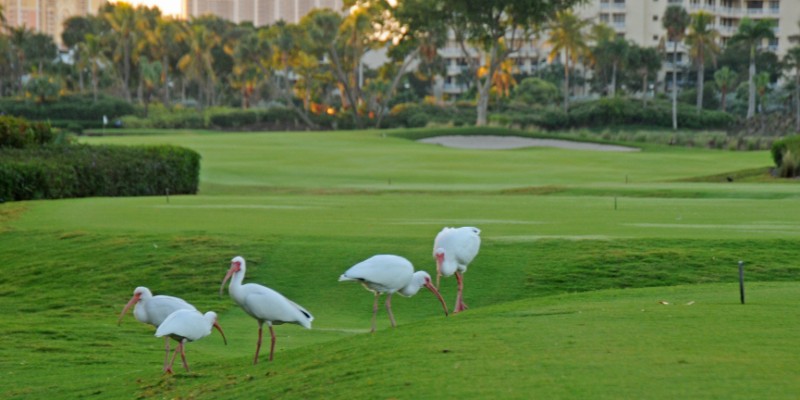 Playing the courses at the Fairmont Turnberry Isle Resort north of Miami, the birds caught my attention first. Not birds on the scorecard, unfortunately. Birds flying through the air, birds pecking at the ground, birds foraging in the ponds.  Turnberry Isle is almost a rookery. I’m not sure whether that’s something to smile about or cry about.

The two golf courses host gulls, geese, ducks, swans, cormorants and coots.  Ibises use their long, curved beaks to peck away at grubs along the greens and tees. Snowy egrets and a pair of gaudy, orange-pink flamingos oversee the water hazards. 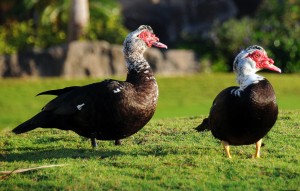 That may be because Turnberry Isle is a 300-acre oasis of green grass and blue ponds in an urban desert.  Concrete causeways and white condo towers, their balconies and windows as regimented and alike as boxes on a spreadsheet, dominate the horizon. Standing on a tee at Turnberry Isle, trying to pick a target, it’s as if a couple of golf courses had been laid out in New York’s Central Park. To a bird seeking a winter home, the golf courses of Turnberry Isle must look like the Promised Land.

To the bird’s ancestors, maybe not so much.  Turnberry Isle and its surroundings were empty wetlands 45 years ago, half a mile inland from the Atlantic; one can only imagine the variety of avian species that inhabited the marshes then. A developer named Don Soffer bought the property and, according to the company history, sketched his dream on the back of the proverbial cocktail napkin.

So, which view of history do you prefer when you play Turnberry Isle? In one way of looking at things, the golf courses occupy land that should have been left wild, and, perhaps, under modern environmental laws, would have been. From another perspective, everybody has won. North Miami got Soffer’s dream: a couple of golf courses, a shopping mall with a Nordstrom’s, and thousands of warm new places for retirees. Golfers got a place to play in winter. The birds still have a place to gambol. And Don Soffer got a fortune.

But I can tell you that the golf courses are first-rate. Robert Trent Jones originally designed the Turnberry courses. Ray Floyd re-designed them in 2002. He gave the greens a lot of movement and protected them with deep bunkers. He pushed up tees and greens, adding elevation to the naturally flat terrain. The courses are perhaps a trifle short, at 7,047 and 6,417 yards, to test today’s male pros. But the resort hosted Senior Tour events in the late 1970s and early 1980s. It hosted an LPGA event until 2009. Turnberry Isle is more than challenging enough for guests, like me, whose games are encrusted in winter rust. 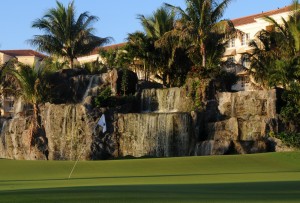 The waterfall at the 9th green, Miller Course

The longer Soffer Course is considered the championship layout of the two. It ends with a couple of flamboyant touches: the green on the par five 18th is an island overlooked by an enormous artificial waterfall. (There’s another faux cascade behind the 9th green on the shorter Miller Course. )

The toughest stretch on the property runs from the 4th tee to the 7th green on the Miller, named, I was told, for the family of Don Soffer’s wife; one can only guess why he gave his in-laws’ name to the course with the toughest holes. No. 4 requires a tee shot over a cove in a large lake. No. 5 is a par five that follows the curve of the lake. Balls pushed to the right are wet. Balls pulled to the left are out of bounds on East Country Club Drive. No. 6 is a long par three, 217 yards from the tips, to a peninsula green that juts, barely, into the lake. The tee shot rises and disappears against the backdrop of condos before falling into view. Anything short or right is wet. Left is in a bunker and further left is off the golf course. After that, the 7th hole, a par four, is a cape hole. The player must decide how bold to be in picking his line over the lake .

“That’s the last of the lake holes, “ caddie Bob McShane said cheerily as my foursome putted out on No. 7.

“We won’t miss it,” I said.  My golf bag was a few balls lighter than it had been when we started the lakeside stretch.

All of the golfing ground is covered by paspalum grass, a variety that flourishes in salt air and is, consequently, becoming the standard golf turf of the Caribbean basin. The paspalum at Turnberry Isle provides smooth, grain-free putting surfaces. Balls sit up on fairway lies and a low drive rolls out nicely. Oddly, the grass is very sticky around the greens. A lob or pitch that lands a couple of feet from the putting surface is likely to stay there. I can’t report on hitting out of long paspalum rough.  Turnberry Isle’s superintendent, mercifully, keeps the mower blades on only three settings—low, lower and lowest. 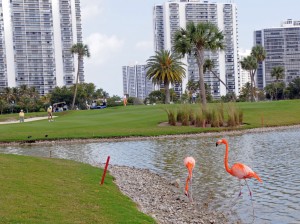 The flamingoes do not care if your birdie putt rolls in

The golf courses are pricey. A la carte rounds for high-season hotel guests are $225 on the Miller Course and $250 on the Soffer Course; you’ll add to that the tip for a mandatory forecaddie. But each course easily earned an A on my rating system, with the Miller Course getting a rating a shade higher than the Soffer Course. They’re beautifully maintained. They’ve got an excellent practice facility. The pace of play is exemplary—a couple of my rounds were done in less than four hours.  The caddies are bright and helpful.

And the birds.  It’s hard to gripe about a missed putt when you can look up and see a couple of flamingos standing in a pond, looking intently for a mid-morning snack, utterly indifferent to whether your white ball rolled into a hole.