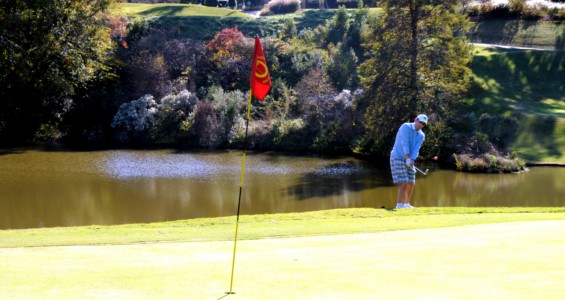 Chipping onto the par-three seventh hole at Williamsburg's Gold Course.

If par fours and par fives are the meat-and-potatoes of golf course design, then par threes are the desserts. And to extend this metaphor to the breaking point, if par threes are dessert, then to my mind the very sweetest of golf holes are pretty, downhill par threes over water.

All of which is to say that there is a treat awaiting golfers at Colonial Williamsburg, in the tidewater area of southeastern Virginia. The Williamsburg Inn’s Golden Horseshoe Golf Club has two courses: the Gold, a 1963 Robert Trent Jones design, and the Green, a 1991 layout by RTJ’s son, Rees. 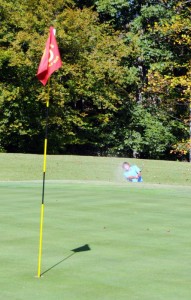 The 16th on the Green Course.

The Gold Course has four of the best downhill, over-water par threes in existence. It‘s like a banquet where the appetizer is tiramisu, the soup is ice cream, the entree is chocolate mousse and the piece de resistance is carrot cake.

The elder Jones built his course on a rolling tract of land just south of the restored 18th Century homes and shops of Virginia’s colonial capital. He took full advantage by placing the tees for his one-shot holes on promontories and the greens well below, in bosky dells just beyond picturesque ponds.
What makes this sort of short hole particularly attractive? For one thing, it won’t overpower anyone. Though they may play a little more than 200 yards from the championship tees, the Gold Course’s par threes require manageable iron shots from the white tees. I played them with 6-iron, 4-iron, 8-iron and 7-iron. Each time, thanks to the elevated tee, I felt the visceral pleasure of watching a golf ball soar high, hang against a clear blue sky, and then fall to earth. Each time I felt the satisfaction of clearing the water. In truth, clearing the water isn’t that difficult on these holes. The ponds look more hazardous than they really are, which is a tribute to the design skills of Jones pere. 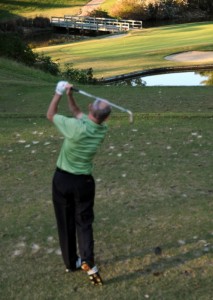 Nearly everywhere, in fact, the Gold Course puts the scoring premium on precision rather than power. The fairways aren’t particularly narrow, but they’re tree-lined. Off-line drives are penalized. On dogleg holes, the long tee shot has to be fitted to the line of play.

But it’s a great parkland course, with the tall trees, flowering plants and lots of wildlife. Canada geese abound, unfortunately. But there are also great blue heron, mallards and groundhogs gamboling about.
Rees Jones’ Green course also calls to mind something sugary, but in this case it’s candy. Mounds, to be precise.
Back in 1991, the younger Jones was into defining his fairways by liberal use of a bulldozer. Most of the fairways on the Green course are flanked by raised mounds. Some are like gumdrops. Some are like fortifications. They sometimes serve to keep a wayward tee shot out of the woods. But because they’re covered in clingy Bermuda rough, they don’t often kick a mishit drive back into the fairway. Instead, the ball tends to stop on a steep side slope, nearly buried in the Bermuda.
The best feature of the Green course may be, logically enough, the greens. They’re raised from the fairways, and they’re subtle. Several look nearly flat, but when the ball rolls on them, it has a way of finding slight breaks that make successful birdie putts rare. Like the putting surfaces on the Gold course, the Green greens are smooth and slick and it’s never a good idea to putt from above the cup. 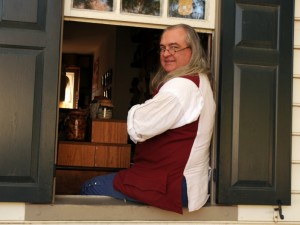 Hanging out in Colonial Williamsburg

Both courses are open to the pubic, and the Williamsburg Inn has some attractive golf packages.  If I were visiting with family, and I could only get away for one round, I’d play the Gold. It’s a solid A. The Green is a good layout, but not so much to my taste. I graded it a B+. Together they make a fine pair.

Those Williamsburg packages, by the way,  all include the pleasures of the restored colonial town, which does a fair job of reenacting the look and life of an American town under the Union Jack.  Actors dressed in period costumes tend stores, run taverns, grow herbs, and pour silver just as if it were still 1771. It’s like Disneyland for history buffs.