Why not? Doesn’t Italy deserve to be known as a destination for lovers of golf as well as lovers of opera, or just lovers? On a recent trip to northern Italy, traveling from Milan to Venice, I decided to find out by sampling five courses. Some were rated among the top dozen or so in Italy. Some happened to be on the route.

Bergamo is an ancient city on a hilltop 30 miles east of Milan. Its 27-hole golf club is in the Alpine foothills about 10 miles to the north. It’s a pretty setting. Mountains loom above the golf course. On a Sunday morning, church bells ring from village campaniles, echoing off the rugged, rocky mountainsides. There are moments when a well-struck shot rises off the turf and seems to hang against a view of forested slopes and solid chalets.

Golf Club Bergamo, built around 1960 and credited to the British design team of Cotton and Sutton, is the home course of Costantino Rocca; the estimable Ryder Cup player of the 1990s got started caddying here. It’s a good test.  The nines preferred by the members, yellow and blue, play to a total of about 6700 yards from the back tees, and there is elevation change on almost every hole. The course winds around hillsides, with fairways terraced between stands of cedar and pine. The fairways are wide, the greens smallish. Like most mountain courses, Bergamo doesn’t need severe slopes to make its greens hard to read. Putts tend to break toward the Mediterranean, even when they look like they should break toward Zurich.

The layout makes prudent use of several creeks. They meander along the sides of several holes, but they seldom encroach. When they cross the line of play, they do so in wise spots: where a long hitter might want to drive on a par five (like No. 4 on the yellow nine), or in front of the green on a short par three (like the downhill, 140-yard 5th on the red nine).

For all of that, though, the course seemed a bit unimaginative, particularly in a country that elsewhere shows such flair, even flamboyance, in design. Perhaps it’s because there wasn’t an Italian golf course designer 50 years ago, and the job had to be outsourced to stolid Brits. In any case, Bergamo doesn’t demand much in the way of strategy. There are a few holes where the fairways drop to a lower level and the transition areas between the fairways are sloping rough. On these, the prudent tee shot might need to be a layup. But for the most part, a player can walk around on cruise control. When there is a preferable line to a hole, it can be an odd one. A massive tree guards the left side of the 4th green on the yellow nine, and most architects would consequently route the hole in such a way that any hazard would guard the right side of the fairway. Not here; the safe line on the on the second shot is also the line that opens up the green for the third.

The course had maintenance issues on the morning we played it. A thunderstorm had passed through the night before, exposing some drainage problems. Tee shots plugged in a couple of soggy fairways and the bunkers around many greens contained a mixture best described as gravelly mud.

Thus, it was difficult to rate Golf Club Bergamo. Had I played on a morning when the course had been drier and better groomed, I might have thought more highly of it, but on this particular morning, I gave it a B-. (To read more on how I rate golf courses, click here.) The green fee was 77 euro and there was a 5 euro charge for a pull cart. (Visitor rounds can be booked through the club’s web site.) The amenities for visitors were sparse. There was no drinking water on the course, even though the day was hot and the hills were rugged. 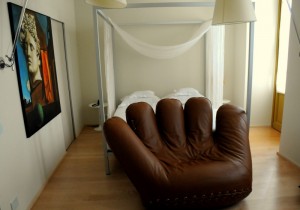 Our room at the Petronilla in Bergamo

Italians, in my experience, show their flair for design in their small hotels. Petronilla, which opened in 2009 in a renovated apartment building in the citta bassa section of Bergamo, is an exquisite example. It has 12 guest rooms; all of them, as well as the common rooms, are decorated in a thoughtful, modern and occasionally whimsical style.

Our room, for example, had, of all things, baseball motif. The sofa was a mock baseball glove. The wall had a large, dramatic painting that depicted an eclectic mix of images, including a blue ball, a limp rubber glove, and the bust of a heroic male gazing wistfully into the distance. The bed was a four-poster draped in muslin, but the posts were aluminum. The bathroom gleamed, with dark walls and stainless steel fixtures. 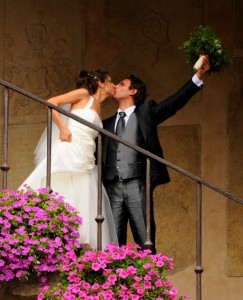 Newlyweds in the Piazza Vecchia

The hotel’s staff is friendly and attentive. They’ll pour your juice at breakfast. They’ll make your coffee to order. The breakfast buffet, by the way, offers everything from corn flakes to crème brulee. The hotel has an affiliation with Golf Club Bergamo, and package deals are available, combining lodging and green fees.

Off the Course: La Citta Alta

If you have an evening in Bergamo, take the funicular up through a break in some ancient fortification walls to the area known as the upper city. The walls give a hint of the violent past of ancient and medieval Bergamo. It had to be built on a hilltop to defend itself against the barbarian hordes and imperial armies that coveted this section of Italy. 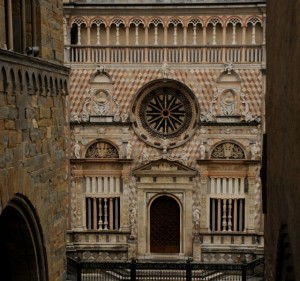 A church in la citta alta

Now the walls encircle a neighborhood of ancient, narrow, cobblestone streets, beautiful old churches and dozens of shops, cafes, wine bars and restaurants. At the center is the Piazza Vecchia, with a pleasant fountain, two impressive palaces and a towering campanile that has an elevator to its bell level.

Try a wine bar like La  Cantina Via Colleoni. The menu is very simple—a pasta, like cappellini in a tomato sauce, and an appetizer, like a creamy gazpacho. Ask for a bottle of local wine, like Arlecchino, named for the clown in classic Italian theater. It’s flavorful, but crisp.

There are worse ways to spend a Saturday evening. 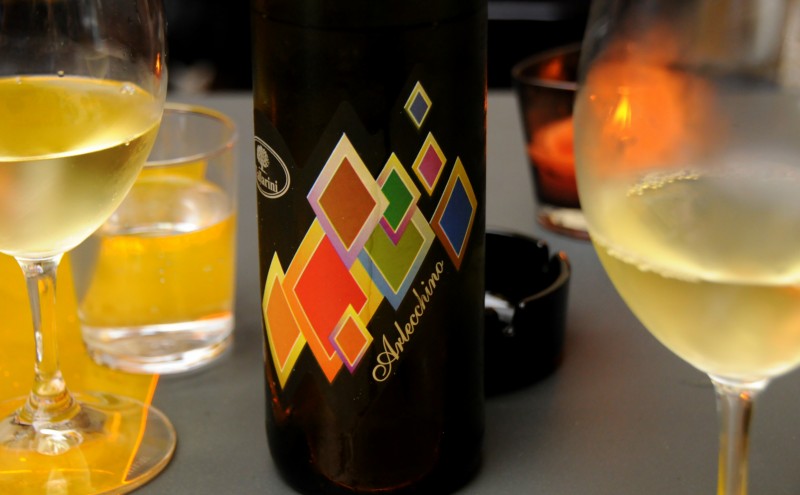 Balm for a bogey-ridden soul.