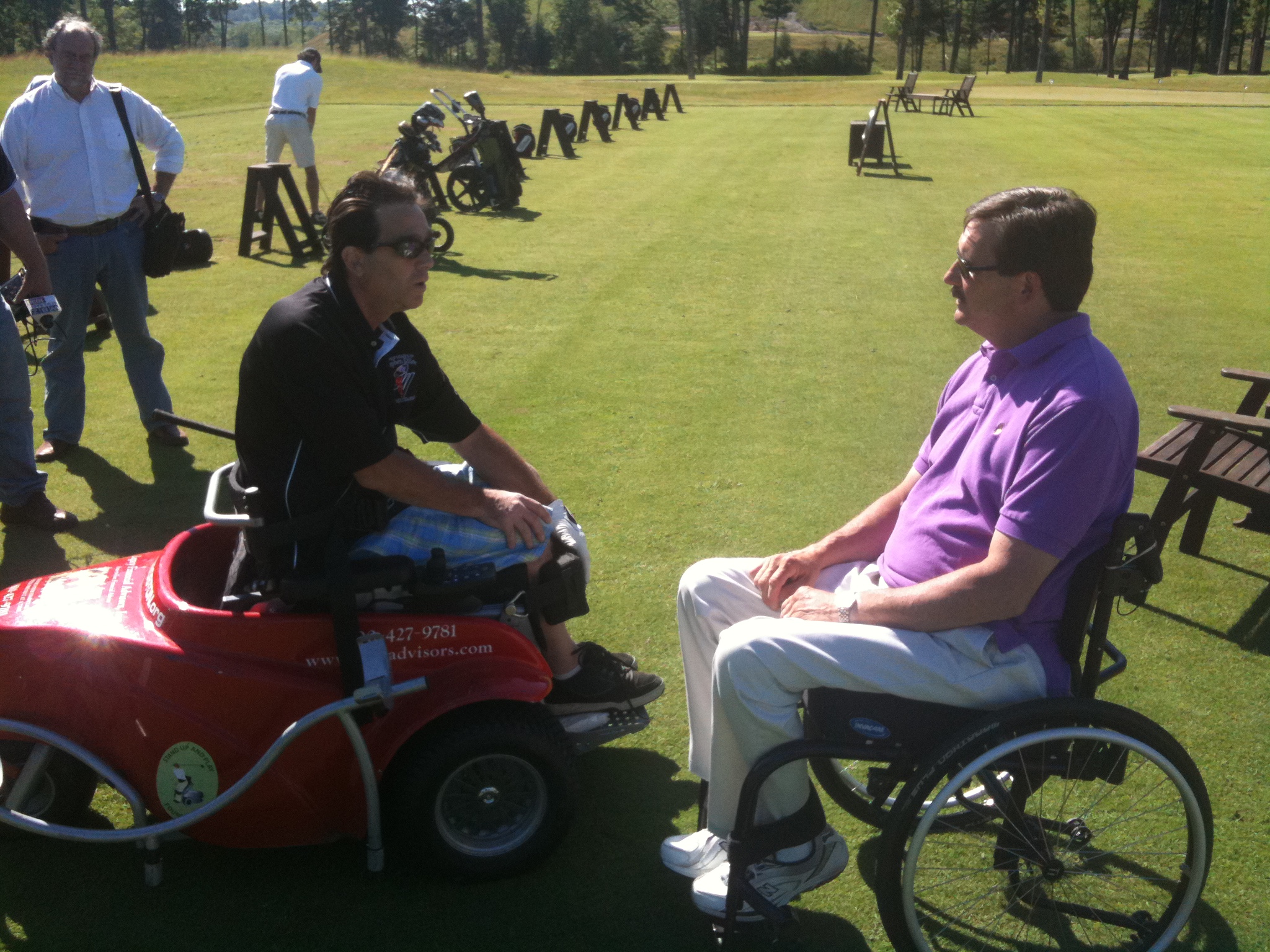 Dr. Michael Jacuch, right, learning about the benefits of the ParaGolfer from Jerry Donovan.

For any avid golfer, a year and a half would be a very long time to go without playing golf.  Too long.  But imagine if you had to go that long without even being able to stand up outdoors.  Dr. Michael Jacuch can tell you exactly how difficult that is.  Following a trip to the hospital in 2010, the Portsmouth, N.H. cardiologist was left paralyzed from the chest down.

“For a long time, I didn’t want to acknowledge that it had really happened to me.  But there’s no denying the fact that I’m paralyzed, and the effect that it’s had on me and my family is almost impossible to put into words.”

Recently, though, Jacuch got a glimpse of a somewhat brighter future when Jerry Donovan of the Northeast Accessible Golf Association introduced him to the ParaGolfer – a high-tech golf cart made especially for handicapped golfers.  Donovan met up with Jacuch at Renaissance, a private golf club in Haverhill, Mass. to show him what the ParaGolfer could do.  Donovan, a paraplegic himself who owns and enthusiastically promotes the ParaGolfer, demonstrated this breakthrough machine – then gave Jacuch a turn.  It wasn’t long before Jacuch was grinning at his solid strikes — and joking once again about his slice.  A part of Jacuch’s life that had been taken away seemed like it might possibly return.  You can view a WBZ-TV news report of Jacuch’s emotional return to the golf course here. 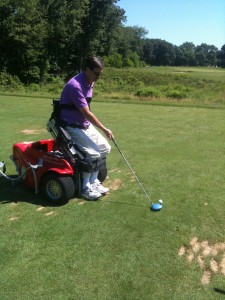 "You're up" -- words that are music to the ears of paraplegics in more ways than one.

The ParaGolfer, also called the ParaMobile, comes from a German company called Parabasetec.  It was designed and developed by Christian Nachtwey (ex European champion of wheelchair golfer) and Anthony Netto (a wheelchair-bound golf professional), in partnership with Otto Bock Health Care, a worldwide manufacturer of wheelchairs, rehabilitation and medical products.  What makes this product so remarkable is that it actually lifts the golfer into a standing position so that he or she can swing at the ball standing up.  It’s a lot easier for a handicapped player to swing this way – and that’s only one of the many important benefits of the ParaGolfer.

“I always enjoyed playing golf, even though I was never a great player,” said Jacuch.  “Being able to use the ParaGolfer and to get out and play with my friends again would be great.  But the other advantages this technology offers are even more compelling.  There’s a lot to be said for being able to stand up.  An awful lot. ”

One of the benefits that Jacuch is referring to is the therapeutic benefit of being able to stand on your feet when you’re handicapped.  Being in a standing, vertical position promotes circulation, stimulates the metabolism, stretches muscles and tendons, reduces spasticities and enhances the mobility of joints.  Paraplegics need to be on their feet daily – and with the ParaGolfer and ParaMobile, they can do so anywhere and everywhere, with just the touch of a button.

Standing up has a host of other benefits, too – including a psychological one.  The day that Jacuch tried out the ParaGolfer at Renaissance was the first time in 18 months that he’d been able to hug his wife Alex without her having to bend over to do so – something that brought both of them to tears.  Jacuch was able to chase his young daughter Natalia around the practice range, too – which quickly had her squealing with delight and made him so emotional that he was at a loss for words.

Jacuch got choked up again when he talked about what a difference it makes to be able to look someone in the eye rather than constantly having to look up at people – and have them look down at him.

“Unless you’re confined to a wheelchair like me and Jerry, people have no idea how hard that is,” Jacuch said.  “In a way, the ParaMobile or ParaGolfer gives you some of your dignity back.  And that means so much – it really does.” 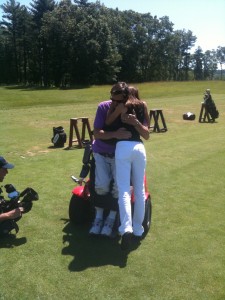 Being able to hug your wife in a standing position for the first time in 18 months -- priceless.

As you might imagine, the ParaGolfer is not inexpensive.  The technology involved in its design and manufacture gives it a sticker price of over $20,000.  And unfortunately, despite its proven therapeutic benefits, insurance doesn’t cover the purchase of a ParaMobile.   This is something that both Donovan and Jacuch believe should be changed.  The fact is, keeping paralyzed legs healthier can help keep paraplegic people healthier.

In Jacuch’s case, the ParaMobile could have one other amazing benefit, too.  It could allow him resume doing the kind of interventional cardiology procedures that he used to do – procedures that normally require the physician to be in a standing position.  That would benefit not just Jacuch – but all the patients he could be seeing and helping, too.

“This product is a godsend is so many ways,” Jacuch said.

Now he just needs to find a way to get one.

If you’d like to speak to Dr. Jacuch about the ParaGolfer or ParaMobile – or would like to help him in his quest to get one, he has provided this email address for direct communication: mjacuch@aol.com.

One Response to “ParaGolfer Deserves a Standing Ovation”