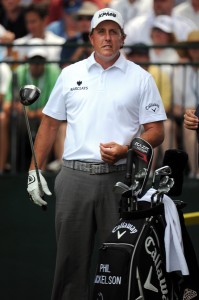 Darren Clarke was a good story winning the British Open, but so would have been Phil Mickelson (above) or Dustin Johnson or Thomas Bjorn or Rickie Fowler. Photo copyright Icon SMI.

I enjoyed the British Open and, like everyone else, was happy to see Darren Clarke win. But it also reminded me of one unavoidable thing that I don’t like about pro golf—only one player can win each week.

Yes, Clarke was probably the best story. He’s an Everyman type, without the John Daly baggage, and a genuinely nice guy. He’s had a rough go of it personally with the death five years ago of his wife, Heather, leaving him to bring up two boys as a single father. You could pull for him as an underdog, since his play in recent years made him an unlikely winner. Yet, considering his entire career, you could also root for him as a very good player who deserved to win a major at some point.

Or to see Phil Mickelson capture a fifth career major title and move up a notch in historical terms by claiming a victory in the championship that had given him the most trouble in the past. That would have left him lacking only a U.S. Open for a career Grand Slam—and what would that do for anticipation of next year’s event at the Olympic Club?!

Or to see Thomas Bjorn rebound to win the British Open on the same course where he blew it eight years ago by taking three to get out of a bunker on the 16th hole of the final round.

Or to have Rickie Fowler win to give the game a boost of youthful energy by having two straight majors won by 22-year-olds. Also, for us Americans, to end the U.S. major drought (also true for Johnson or Mickelson).

All of them seem like decent enough fellows, at the very least. Yet the certainty going into the final round was that all but one of them would end up with heartbreak.

True, the proportion of heartbreak, and the difficulty of emerging as the one winner from a pack of contenders, makes victory all the sweeter. Still, it makes golf a cruel game at the highest levels.

But it’s not only the sadness of losing that I find unfortunate. It’s that everyone who didn’t win is open to criticism for not coming through in the clutch. They “were unable to close” or they “didn’t have what it takes to win” or “they couldn’t handle the pressure” or (more directly stated) they “choked.”

This ignores the unyielding math of professional golf: On the Sunday of a Tour event or major there are anywhere from a couple players to a dozen or more with a decent chance of winning, but only one will do it.

Let’s envision a hypothetical Tour where every single player has nerves of steel. They have their technical flaws and are subject to varying degrees of luck, so they make bogeys at an expected rate of frequency, but they never choke. Even on this Tour, only one player would win per week. And since they were making birdies and bogeys as golfers always do, some of them would have lost because they made bogeys down the stretch.

Put it another way: Suppose you made a realistic Tour golf board game where each player’s skills were accurately represented by numbers on a card and the result of each shot was determined by the roll of dice. Pure randomness would dictate that some players “blew” tournaments by making bogeys at crunch time, while others came through in the clutch. (This actually isn’t hypothetical. There was such a board game in the 1970s called APBA Golf, and I once conducted a tournament where a player lost a six-stroke lead on the back nine. A real choke job—purely determined by dice rolls!)

I’m not denying that pressure plays a role in championship golf. The stakes that the pros play for are so high that they can’t help but feel some jangling nerves. There’s certainly a mental aspect to the game, and plenty of time to think on the golf course, and pressure can have an affect there. I don’t think so many rounds of 78-plus from overnight leaders of major championships can be attributed to coincidence.

But the randomness is there in the background. If a player bogeys a tough 18th hole when he was tied for the lead, did he choke? Or was it just one of those one-in-four times that he would bogey that hole anyway, even in a casual round? Well, there’s no way of knowing. Unfortunately, we can’t separate out the randomness from the nerve factor. Heck, even if he bogeys an easy 18th hole, we don’t know if it’s the one time in 10 that would have happened anyway.

But in reacting to and analyzing the tournament, the desire for a narrative wins out and the randomness isn’t even considered. It can’t be that the player just happened to make a bad swing on the 18th tee—it must have been the pressure that did it. But sometimes a bad swing is just a bad swing. Players even make them on the practice range.

In addition to a player’s own variability, there’s also the randomness factor that comes from the play of other contenders. Let’s say you come into the final round with a chance to win and play well—not great, but well enough to have a chance to win depending on what others do. On one day, you might lose because somebody else shot a 64. On another day you might win because the leader blew to a 74. But you didn’t do anything differently.

Still, we always hear that winning is the only thing that matters, and we judge players mostly on their victories. There is something to be said for this, but, I think, only in the long run…the very long run. In a world where 156 players compete each week, about 80 of them come into any tournament with a realistic hope of winning, usually about 10 come into the final round with a realistic chance, but only one can win, it’s harsh to judge by what happens in any one tournament—or even in any one season. A season with 10 top-10s and no victories might just mean things didn’t fall a player’s way. So might a sequence of close calls in majors.

The cruel math of professional golf—being judged by victories in a sport where you’ve got to beat a whole field of golfers to do it—can be overcome by talent, but only by exceptional talent. Maybe it can be overcome by force of will, but generally only by the likes of Jack Nicklaus and Tiger Woods, and for them exceptional talent has more than a little to do with it.

The best way to deal with it is longevity. Keep plugging away long enough, and good things might happen eventually—as we saw with Darren Clarke capturing a major at the age of 42.

2 Responses to “So Many Potential Stories, But Only One Winner”