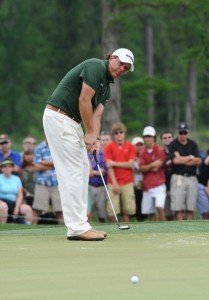 Mediocre putting might have kept Phil Mickelson from reaching No. 1. Copyright Icon SMI.

Last week I looked at what the PGA Tour’s new-and-greatly-improved putting stat revealed about who are the best putters on Tour. Now let’s take a look at what it tells us about the putting prowess of the top players in the game.

Let’s get right to the list. Here is the strokes gained-putting average for the elite of the PGA Tour over the period 2004-11 (the number represents the strokes gained or lost by each player compared to a Tour average performance from his positions on the green):

Note: The numbers for Donald, Woods, and Stricker differ slightly from when I listed them among the best putters in my previous post. In that computation, I weighed each round equally, whereas in this one I averaged each player’s yearly totals (counting this year as half, since the FedExCup season is halfway finished).

Some observations on individual players:

Luke Donald: As noted in the previous post referenced above, Donald was a very good putter from 2004-8, and has been the best putter on Tour since then.

Tiger Woods: Ranked second to only putting wizard Brad Faxon over the 2004-9 period. His putting has clearly dropped off as he has gone winless since his return from scandal in 2010, though it’s hard to say how much because of the relatively small sample size due to a limited schedule. In 40 tracked rounds (majors don’t count because there is no ShotLink Data) since the start of 2010, he has been a slightly above Tour average putter at .114.

Hunter Mahan: He’s been very consistent over the years, but two-win 2010 might have been even better if not for a putting performance that dropped to mediocre (.067).

Phil Mickelson: Here’s a rare case of Phil the Thrill being mediocre at something. He’s been slightly below average on the greens in three of the last eight years and slightly above average in five. It might be the putter that has kept Mickelson from ever reaching No. 1 (yes, his driving is wild but that’s offset by his length off the tee).

Bubba Watson: While he’s made some big putts this year, overall he’s still below average on the greens, as he’s been for his entire career. As previously noted, his statistical improvement in 2011 has been in driving accuracy.

Dustin Johnson: After a poor rookie season in putting in 2008, he was a slightly above average putter in 2009 and 2010 when he became one of the game’s top players. He’s been dreadful so far in 2011 (.-592). With his long game, average putting is enough to make him a dangerous player, but can it take him to No. 1?

Sergio Garcia: No surprise, he’s a below average putter. But actually not one of the worst putters on Tour, so he’s not as bad as his reputation would suggest. (Still to come: a post on the worst putters.)

Vijay Singh: Again, no surprise to find Singh in negative territory. However, it should be noted that in 2004-6, when he was one of the best players in the game, he was a slightly above average putter. He was about average in 2007, but has been awful since 2008, the year he turned 45.

Ernie Els: Not generally considered to be a bad putter, but these numbers don’t lie. Has been below average on the greens in every full year he’s played since 2004 except for 2010, which was not coincidentally his best year during that span. But this year he’s been one of the worst on Tour (-1.156).

Adam Scott: A very strange case. Stunningly, he led the Tour in strokes gained-putting in 2004 but he’s been in the bottom 10 in 2009, 2010, and 2011. Normally, sabermetricians would look askance at a stat that showed such fluctuation. But this stat is virtually unassailable as a reliable measure of putting, and other players rarely show wild fluctuations. The one issue that introduces a bit of unreliability over shorter periods is small sample size, especially for a player who plays less than a full schedule. That might have played a role in 2004, when Scott’s average was pulled up by an extraordinary putting week when he won the Deutsche Bank Championship. In fact, it was the best putting performance by a winner in any tournament since 2004. Still, whether he was really the best putter on Tour in 2004 or not, there’s no denying that Scott was a very good putter then and has become a really, really bad one. The jury is still out on his switch to the long putter. He must have putted reasonably well in finishing second at the Masters (not included because it’s not covered by ShotLink), but he has putted poorly in his two outings since.