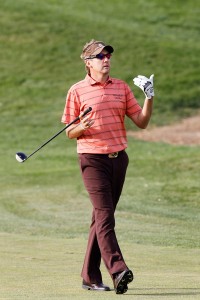 Last week provided a nice dose of match play as the European and LPGA Tours played that format—but it also provided some reminders of why we don’t see all that much match play on the Tours.

But they still suffered on Sunday afternoon from the fact that watching a single match doesn’t hold your attention like the final round of a stroke-play tournament. There’s simply too much down time with nothing going on. In stroke play, you often have six or eight players coming down the stretch with a chance to win, which makes for more story lines and far more golf shots per minute. Even when the last groups are on the front nine, there’s the chance that one of the early starters has a hot round going to add to the drama.

Match play is great at team events like the Ryder Cup and Presidents Cup when a number of matches are going on at the same time. In individual tournaments, it’s great in the early rounds—the most exciting first round of the year, by a wide margin, is the WGC-Accenture Match Play. On Sunday, unfortunately, not so much.

I’m not just talking about television here. The finals of a match-play tournament aren’t great for spectators, either. There’s nothing to do but follow one twosome, but if the crowd is big you’re not going to be able to see much. Of course, without the chance to sit and watch a bunch of groups come through the tendency is for only the die-hards to come out, so you’re generally not going to draw a huge gate anyway.

Fortunately, we did get compelling match-ups in both events. In Europe, it was Luke Donald and Ian Poulter, both top-20 players in the world (Donald came in at No. 3 and would have moved to No. 1 with a victory) and the last two winners of the WGC Match Play. On the LPGA, it was Cristie Kerr and Suzann Pettersen, both in the top five in the world.

Poulter beat Donald 2 and 1, while Pettersen topped Kerr, 1 up, in matches that each had their share of back-and-forth action. So far, so good. But some of that back-and-forth happened by virtue of sloppy play; neither final match was marked by a blaze of birdies. (To be fair, there were some great moments: Poulter fueled a back-nine surge with a 40-foot birdie putt at the 12th and Pettersen clinched her match by holing a 15-foot birdie putt on the par-five 18th, denying Kerr a chance to draw even with a 10-foot birdie putt.)

All four participants pointed to fatigue as a factor. In both cases, it was the second match of the day, as the semifinals were played in the morning, and the sixth round in four days. Frankly, I’m not sure that tiredness is a valid excuse. You would think adrenaline would take over in such an important match. But it is an excuse nonetheless.

Tired or not, it was good to see familiar faces in the finals. Also it’s noteworthy that match play often seems to bring to the fore very good players who don’t seem to win quite as much as we think they should in stroke play.

Pettersen had finished second six times since her last victory, while Kerr is good for a win or two a year without ever having the breakout season she seems capable of. On the men’s side, Poulter and Donald have been absolute match-play killers, with excellent Ryder Cup records and each with a WGC Match Play title. But Donald has only one stroke-play victory in five years and Poulter just two in four-and-a-half years.

The answer, I think, is that steadily good day-to-day play works better in match play where you only have to defeat one player at a time than in stroke play where you have to defeat an entire field. It’s not some mystical transformation where players who are shrinking violets under stroke-play pressure become tigers in match play. In Poulter’s case, one might be tempted to say that he just doesn’t have quite enough game to be a stroke-play star but his ultra-competitiveness carries him in match play. There might be a grain of truth in that, but that’s not the whole story.

About the Volvo, it’s worth noting the odd format. It was a 24-player event with the entire field remaining alive through a round-robin format on Thursday and Friday. The players were divided into three-man pods, with each playing a match against the other two in their pod. This was accomplished via eight matches on Thursday and two sessions of eight matches on Friday, which meant that eight players went 36 holes on Friday after having the first day off. The top two players in each pod advanced; in the case of a three-way tie there would have been a playoff on Friday (none were necessary).

The idea, I guess, was to have more players make the weekend and thus a better chance that the top players would survive. Still, it seemed like a lot of work—and a lot of confusion—just to eliminate eight players. And it took away some of the charm of the early rounds of a true knock-out match play event.

The Volvo is a tournament that carried the match-play torch during an era when it had otherwise disappeared from individual competition through much of the 1970s, 1980s, and 1990s. Held in England in the fall, it was an elite event that drew such international heavyweights as Gary Player, Seve Ballesteros, Nick Faldo, and Ernie Els while also often drawing some of the top Americans.

It had a 12-man field (four players receiving byes) and all matches were at 36 holes, designed to reduce the amount of fluky results you might get over 18 holes. It was an unofficial event, but for close followers of the game it was often a highlight of the year.

The tournament eventually tried to slide upward to a semi-official status on the European Tour even as it was actually losing prestige, in no small part because Tiger Woods declined to play after making an appearance early in his career and Phil Mickelson didn’t make the trip.

As a tiny-field event, it only worked if most of the top players in the world showed up, as in 1970 when Jack Nicklaus beat Lee Trevino and 1971 when Player beat Nicklaus. But that hadn’t been the case for at least the past decade as the event foundered and was not held in 2008 or 2010. Now the field has been expanded to 24 and it’s a fully official European Tour event played in the spring for the first time this year.

The timing is good in the sense that there are now so many Europeans near the top of the world ranking that a Euro-centric field still makes it quite a strong event (Ryan Moore was a token American this year). Organizers might consider expanding the field a bit further to 32 and ditching the round-robin format.

With the European Tour’s flagship BMW PGA Championship being played this week, the Match Play makes for a strong 1-2 punch in May—and a problem for the PGA Tour’s Player Championship getting perfect attendance from the top Europeans the previous week.

Individual match-play events aren’t perfect, but there is a place for them. Having one on each Tour is just right.