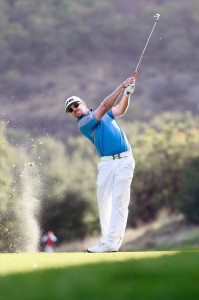 214 days until the opening matches at Medinah.

It was a good week for U.S. Ryder Cup captain Davis Love III. A key player made a big move up the points list.

This time it was Hunter Mahan’s turn. His victory in the World Match Play pushed him to fifth in the U.S. standings; the top 8 earn automatic spots on the team with Love getting four wildcard picks.

Love will be counting on Mahan to be one of his key players at Medinah. Mahan should have plenty of motivation to write a better ending than what transpired at Celtic Manor.

Also, Mark Wilson earned some key points with his third-place finish. He now stands in sixth place. The resident of Elmhurst, Ill. would like nothing more than to be able to make the short drive to Medinah for the Ryder Cup.

On the European side, captain Jose Maria Olazabal has to be pleased with the strong showings from Rory McIlroy and Lee Westwood. Obviously, both players will be tough at Medinah.