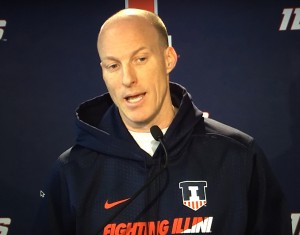 Despite unrest, the signs point to John Groce returning.

Barring a Miracle on Indianapolis Hardwood that would dwarf the Miracle on Ice, Illinois will miss the NCAA tournament for the third straight year on John Groce’s watch.

The Illini have a new athletic director, Josh Whitman, who has thrown down the “We will win!’’ gauntlet.

It all adds up to Groce being shown the door, right?

That’s what I’m reading from media and hearing from fans.

The only problem is, I’m not expecting that to happen.

My sources tell me that barring a major change, Groce will be back. And honestly, I don’t disagree with giving him another year.

Illinois is a good job, but it’s not as good as some Illini faithful believe. It requires hiring the right guy, but that’s a trickier deal than people believe.

Did you know that that Krzyzewski guy almost got canned early in his Duke tenure? Do you remember that when Lon Kruger was Illinois’ coach, he was ripped regularly for not being able to recruit Chicago?

I covered the downfall of Rick Majerus at Marquette. At the time, I thought it was a shame because he was such a fun, smart, down-to-earth guy; he just wasn’t cut out to be successful at the highest level. And then he went on to kick butt at Ball State, Utah and Saint Louis.

I’m not comparing Groce to any of those coaches or situations. I’m just saying that, when you rush to judgment, you risk ending up with a basketball Beckman.

Making an important coaching change requires careful thought and homework, two things Whitman has not had time to do.

This is not about the buyout, reportedly about $1.6 million on the three years left on Groce’s contract.

It’s about giving Groce–who hasn’t been playing with a full deck, so to speak–a chance to show what he can do with what shapes up as a very promising 2016-17 roster.

Malcolm Hill and Kenrick Nunn, who will be seniors, are proven commodoties. Tracy Abrams, who seemingly was in the same high school class as Derrick Rose, should be back at point guard after redshirting for two seasons due to major knee and achilles tendon injuries.

Leron Black, who apparently needs to spend more time rehabbing his knee and less time bending his elbow, is another piece.

And this year’s freshmen are very solid. Big man Michael Finke and Jalen Coleman-Lands already are delivering, and should only improve as they mature. We’ll see about the others.

And once again, Groce is hard at work on a recruiting trail in which disappointment has over-shadowed success.

I’ll let the recruiting gurus decide how close Groce was on that trio and other blue-chippers.

The bottom line is, they’re not in Champaign. One big surprise to me has been Groce’s inability to land the big ones.

Based on his Thad Matta pedigree and what Groce had done at Ohio U., I thought he would recruit Chicago well. Matta’s Chicago-area history includes Evan Turner, Sam Thompson and Lenzelle Smith Jr.

In many ways, Groce made more sense as a recruiter at Illinois than Shaka Smart and Brad Stevens, the two pie-in-the-sky candidates when Groce was hired.

The problem is, Jalen Brunson needs to go a ‘Nova, a national power where he can showcase his skills and develop. That’s not what Illinois is right now.

It was that when the Lon Kruger was able to parlay the Peoria Pipeline and some other clever recruiting into a quality situation that set the table for Bill Self. Illinois obviously was that when Self elevated the recruiting. Not only did he land Dee Brown and Deron Williams. Charlie Villanueva and others were on their way to Champaign till Self bolted to Kansas.

Illlinois still was a good destination when Bruce Weber rolled up his sleeves. The problem was, as good a coach and as nice a man as Weber was, he had nothing up his sleeve in the recruiting department.

On Weber’s watch, Illinois stopped being a destination. To many urban recruits who don’t get Illinois’ basketball history or its Assembly Hall, Champaign looks Iike Illinois A&M.

On top of that, places like Indiana, Michigan and Iowa, which were mired in varying depths of mud, have joined quality perennials such as Michigan State, Wisconsin and Ohio State. In other words, getting Illinois back in the mix is a tougher deal today than it was when Kruger, Self and Weber arrived.

That said, Groce needs to get something done next year—no ifs, ands, buts about it. No excuses.

What does that mean? The NCAA tournament is the absolute minimum.

And if he needs to break the bank on Bubble Wrap to avoid the freakish injuries that have dogged his Illini tenure, it’s time to stock up.

Groce also is subject to complaints that players haven’t improved on his watch. I don’t necessarily subscribe to that.

What I do think is that his players and his team haven’t improved quickly enough. The development needs to be steadier. There needs to be a sense of urgency from the get-go.

It’s very easy to forget that when Groce arrived, he won his first 12 games–including the Maui Invitational–and was the Toast of Champaign. Even after some mid-season stumbles, his first team came within one or two controversial possessions of the Sweet 16 of the 2013 NCAA tournament.

That was a long time ago, though. Groce may be getting one more year. He definitely needs to use it well.

2 Responses to “Why Illini’s Groce likely to return. And why that’s OK.”