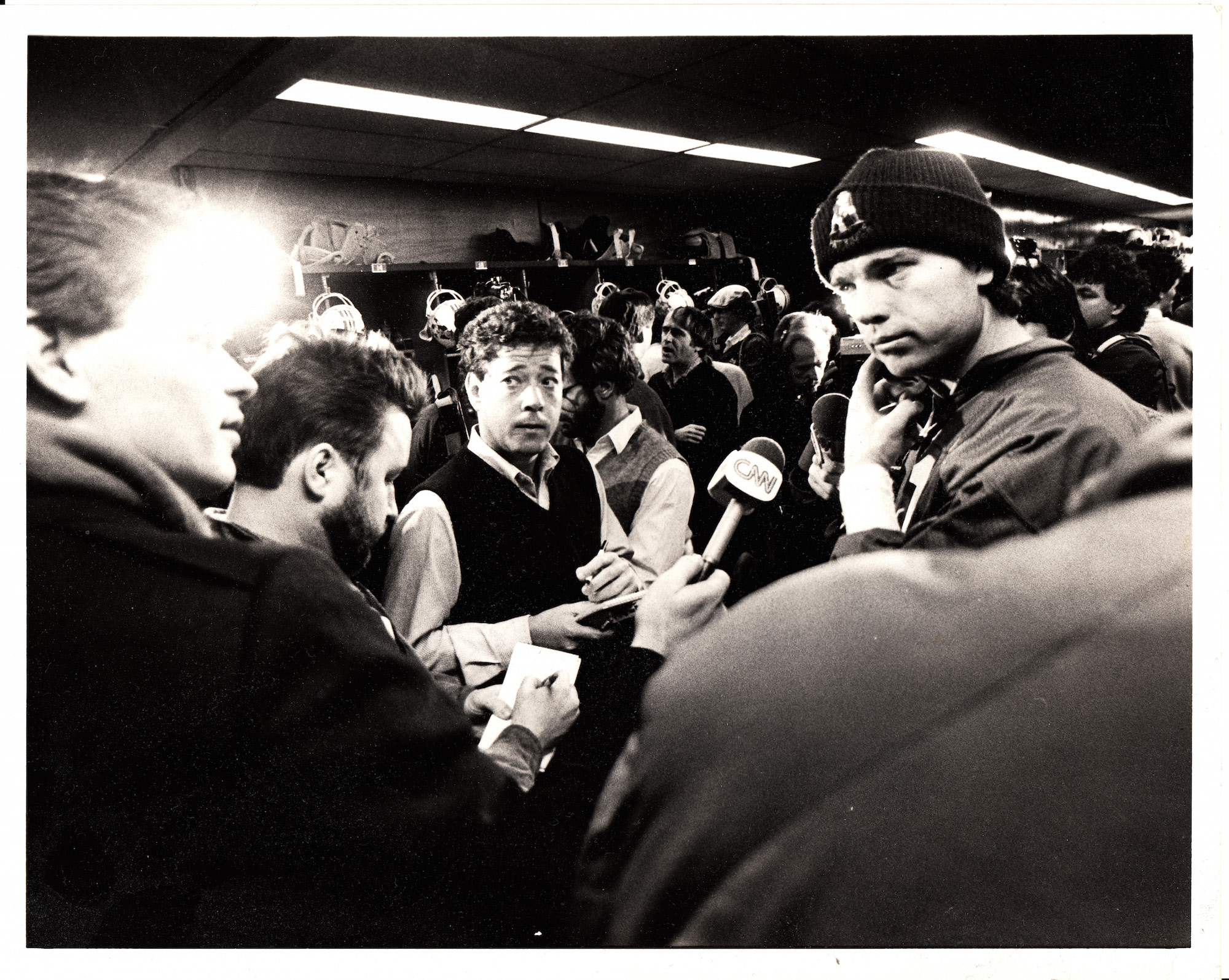 My favorite thing about the ’85 Bears? Aside from the way they dominated opponents with such a fun, dramatic style?

They were pretty much regular guys. And if they weren’t, they did a great job of acting that way.

I was around that team all year, from Platteville to New Orleans. I still have credential No. 1 from Super Bowl XX. And I’m still proud of it.

Nowadays, athletes tend to be sheltered or aloof, or both, like rock stars.

Those Bears were unassuming and friendly.

You could go have beers with them, have real conversations with them.

“Hey, Herb, what are you doing now?’’ Dan Hampton said one day as we left the dining hall during two-a-days in Platteville.

“Going back to my room to work,’’ I said. That was the routine. We’d interview the guys over lunch, and then write before the mid-afternoon workout.

One night, I bumped into Jimbo Covert playing pinball on 2nd Street in Platteville. We started playing. Thanks to hours of practice up the road at the UW-Madison, I was a formidable opponent. If I had worried that Covert would not take losing well, I need not have. A friendship developed.

That turned into one of my favorite stories, an advance of the Bears’ Monday night game in Miami against Covert’s college roommate, Dan Marino, and the pinball machine in their apartment at Pitt. When I got Marino going about the time Covert visited for a Springsteen concert, the Dolphins writers wondered what question had left Dan so enthusiastic.

With Hampton, it led to a quiet discussion of why he declined to participate in the Super Bowl Shuffle video. He thought it was premature; we didn’t make a big deal out of that.

These relationships made the job fun and rewarding and interesting in ways that went beyond covering a team for the ages, a team that would be remembered three decades later.

Everybody was so real. Players like Leslie Frazier and Mike Singletary and Otis Wilson and Gary Fencik and Willie Gault were so interesting to interview. They always brought insight and different points of view. They really thought about their responses.

We weren’t having beers with those guys. I wasn’t, anyway. But we were enjoying, for the most part, being around them, and their football work.

William Perry also was an unblinking delight. When he was finishing up at Clemson, the school sent out a life-size poster of him, touting him for post-season awards. Someone put it up on a wall in the Sun-Times sports department. This was months before the Bears drafted him. I hope somebody saved that.

I have my own Fridge memento. In a New Yorker cartoon, a mom is telling her scowling son, “I read that the Refrigerator eats tons of ratatouille.’’

For the only time in my career, I broke my no-autographs rule and had the Fridge sign it: “Right on. William Perry. No. 72.’’ 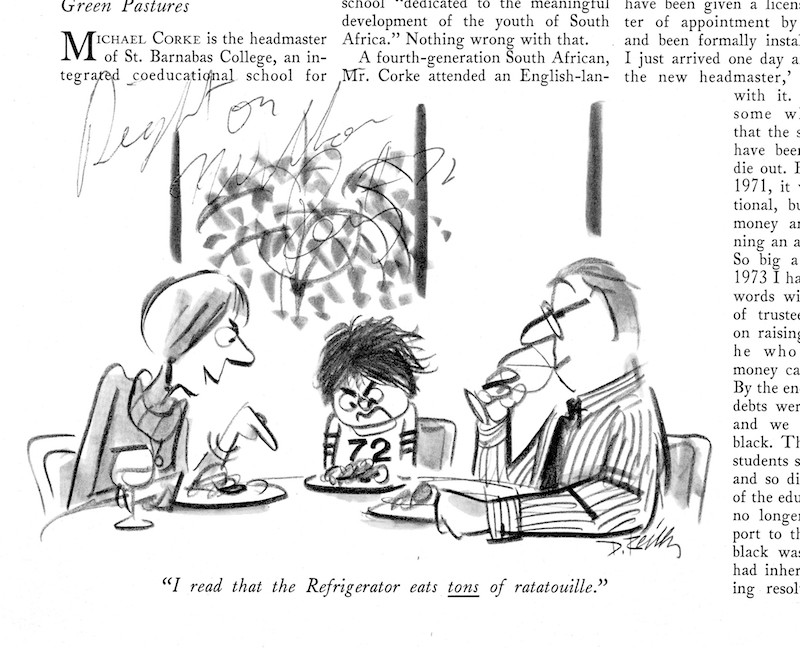 The Fridge graciously signed my copy of his New Yorker cartoon.

The night the Bears lost their only game, to the Dolphins in Miami, promised to be a very difficult post-game locker room. Making matters worse, we were on tight deadlines.

Most of the Sun-Times’ contingent stayed upstairs to finish their stories, so I was running quotes. Only a few players were around.

One was Steve McMichael, who tended to be prickly. The Miami writers and national writers were tentative about jumping in. With no time to spare, though, I just went over to him and asked the obvious. He was fine, articulating the team’s disappointment. He knew this was no time to mess around.

But there was another blemish that I always thought was just as significant.

Going into the Super Bowl, the Bears had shut out their first two playoff opponents.

The celebrated fumble by Payton set up New England’s early field goal. And although the final score was 46-10, I’ve always believed the Bears would have found a way to a scoreless post-season if they’d been working on a shutout later in the game.

I also still wonder if Payton’s fumble had anything to do with Payton not being given the opportunity to score a touchdown later in the game. Ditka has always denied that, but who knows?

Either way, that was a special season. At that point, with that defense, we all thought it would be the first of many Super Bowl appearances for the Bears.

It didn’t work out that way for a variety of reasons.

But it remains a special season. All of these 30th anniversary tributes are a testament to that.

The crazy Thursday night McMahon comeback game in Minnesota. . . the 44-0 pounding of the Cowboys in Dallas. . . the playoff shutouts of the Giants and Rams. 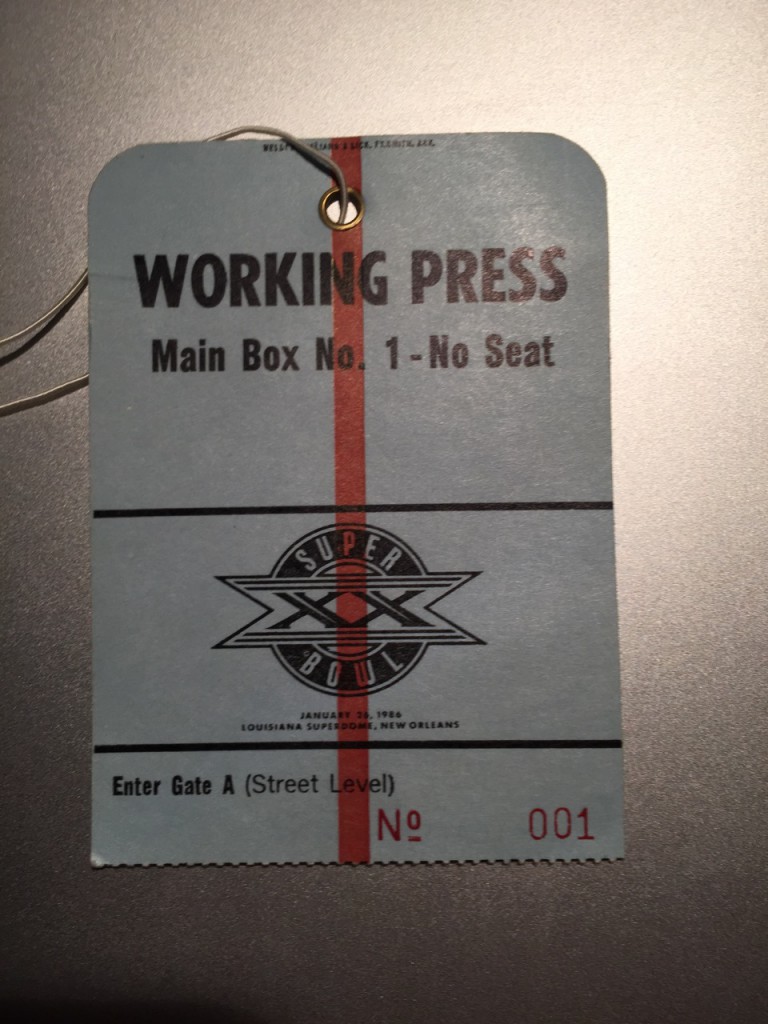 Even the Super Bowl opponent had good storylines. New England coach Raymond Berry, who had been on the receiving end of so many Johnny Unitas passes, had been a childhood favorite of mine. And quarterback Tony Eason was a former Illini star.

The week in New Orleans was such a celebration. Because Rupert Murdoch owned the Sun-Times and the Boston Herald, a newspaper “team dinner’’ was set up at Arnaud’s. In the men’s room that night, I bumped into the old crooner himself, Ed McCaskey, the husband of Virginia, singing a show tune. We chatted. Everyone was so happy.

Even though we all were pretty certain Buddy Ryan was going to be gone to become head of the Eagles, we thought the Bears’ glory years would go on and on.

When they didn’t, it was a bit of a surprise.

There was one of other surprise in that Super Bowl. Although I had credential No. 1, I realized on game day that it was a “no-seat’’ pass. Scrambling a bit, I found a chair

Nothing was going to spoil that day. Or that season.