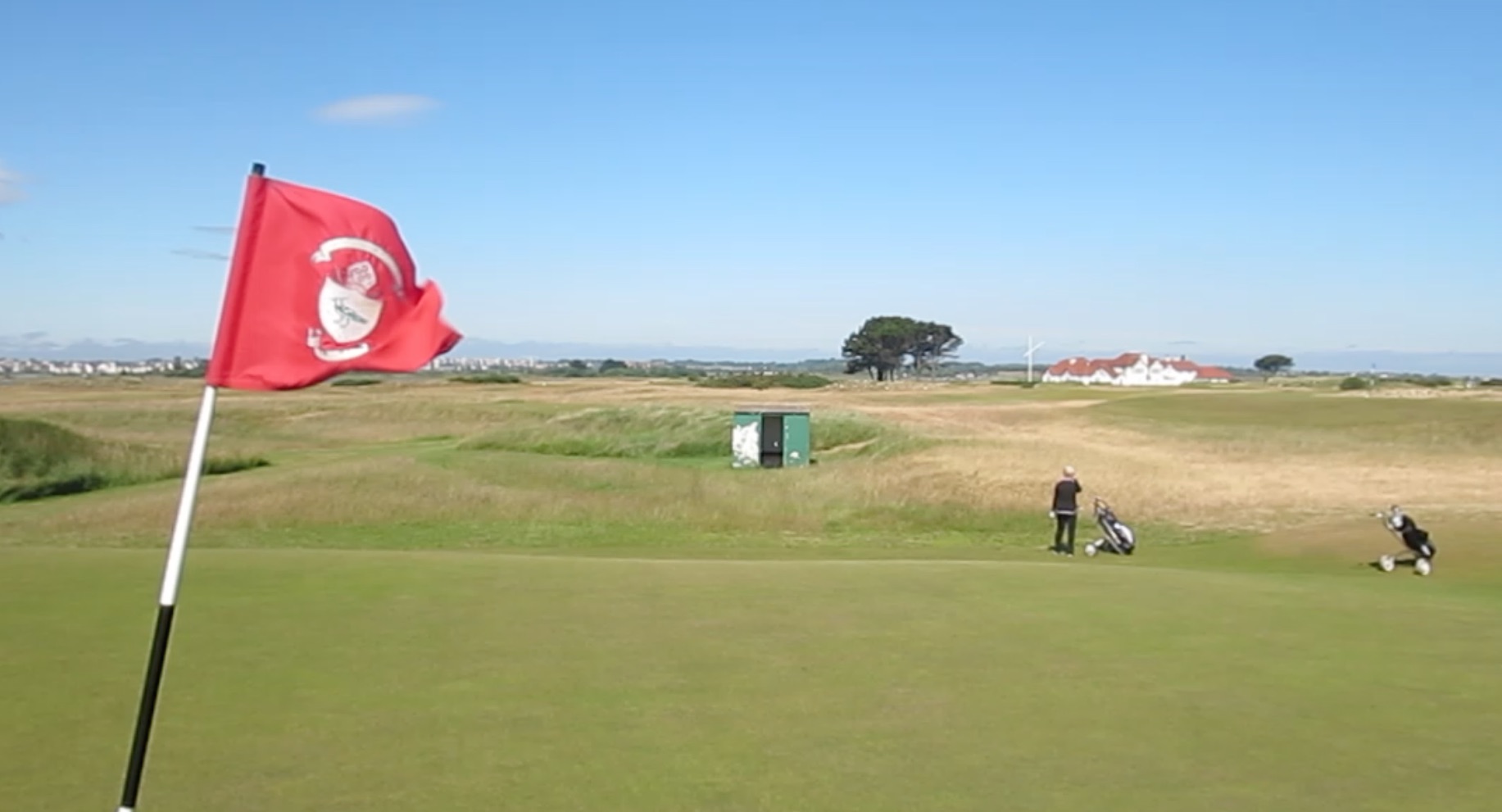 Even on a bright sunny day, when the flags take a beating from the wind at Portmarnock, the golfers won’t be far behind.

Portmarnock ought to be a very calming place to begin a tour of Irish golf links. It is relatively flat, especially during its opening stretch.

And while it is one of the world’s consensus top-100 golf courses, Portmarnock also is an inviting, understated golf course that feels like a step back in time.

Its first hole, a slight dogleg left, doesn’t appear to be demanding. But on a bright sunny morning like the one that greeted us, there was mischief in the Irish air.

That seemingly light left-to-right breeze, masked by the sedate clubhouse to the left of the first tee, stood ready to grab tee shots and push them into the tall grass, if not the estuary of the Irish Sea that runs all along the right side.

On No. 2, which turns into the wind a bit more, over-compensating will leave determined tee shots in the wispy stuff left of the fairway. The fairways tend to be generous at Portmarnock. But courtesy of the wind, they are not as generous as you think.

And every small misstep brings Portmarnock’s other defenses—dangerous, strategically placed pot bunkers and the rolling terrain on and around the greens—into play. 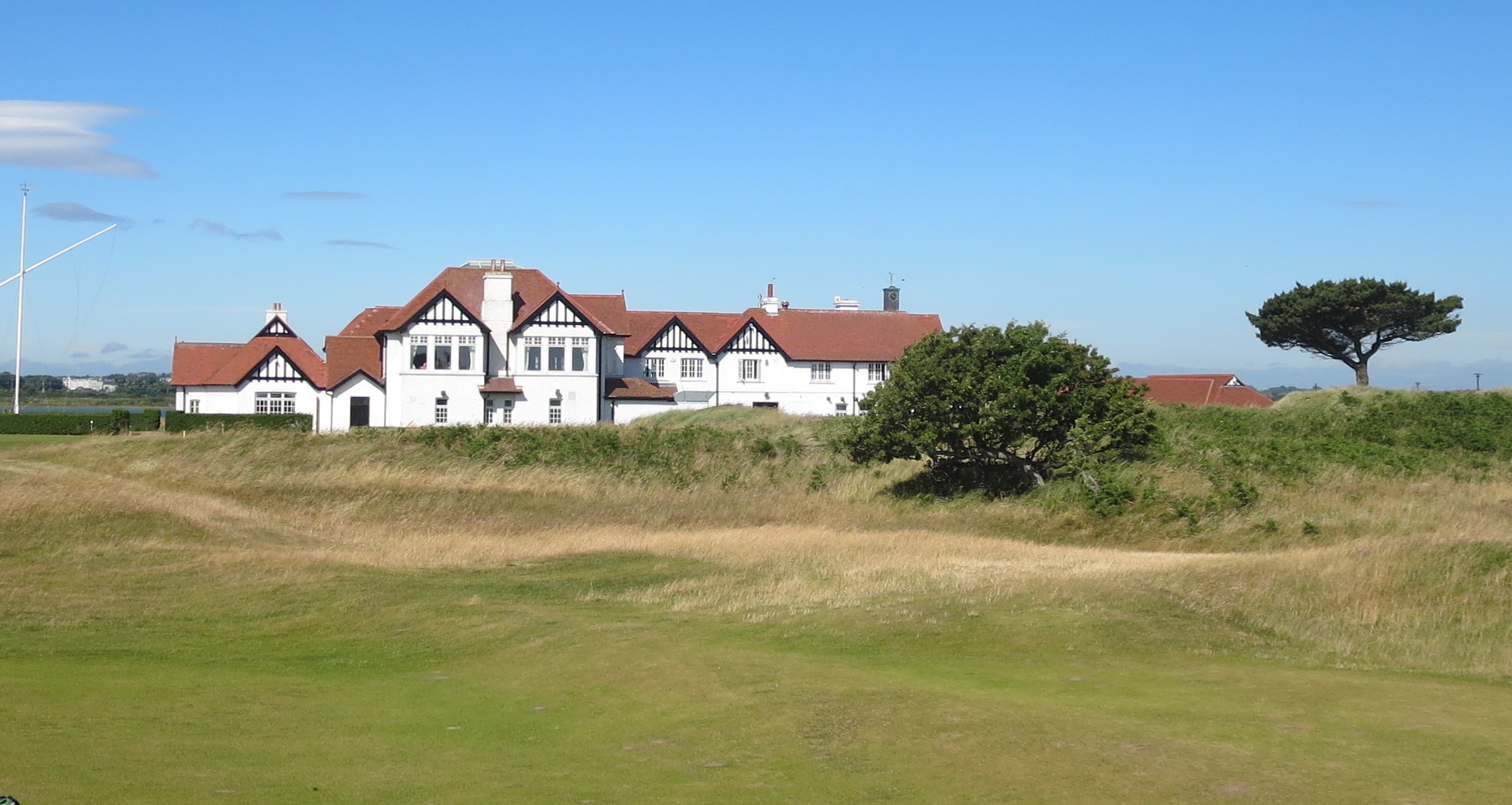 The staid Portmarnock clubhouse is comfortable. And those big windows provide a great view.

Liz and I were pondering these challenges on the third fairway when a gentleman in coat-and-tie approached in a buggy.

“Rory McIlroy and some friends have just teed off on No. 1,’’ the gent said. “Would you mind letting them play through if they catch up to you?’’

No problem, we said.

Anything for the No. 1 player in the world.

With that, we moved along, taking in the challenges of Portmarnock. Originally opened in 1894, it is just a 15-minute drive east of the Dublin Airport and a half-hour northeast of the popular Guinness Brewery in downtown Dublin.

In the most important way, though, Portmarnock is a step back in time, to when golf was played with wooden shafts by gentlemen in coats and ties, and ladies in flowing skirts.

Its accolades are many.

“One of the two or three toughest courses in all of Ireland,’’ James Finegan observed in his 1990s classic, `Emerald Fairways and Foam-Flecked Seas.’ His others? Waterville and Adare Manor.

I wouldn’t agree with that, because I don’t remember Waterville as being all that perilous. And because within the week, I would find Royal County Down and Royal Portrush much more demanding, in terms of shotmaking and golfballs.

There is no doubt, though, that Portmarnock is a gem.

“Entirely playable. Doesn’t beat you up like some [other Irish links courses],’’ the Portmarnock pro told Tom Coyne in his amusing and insightful “A Course Called Ireland.’’

Also true. And yet, Portmarnock is very capable of taking care of itself. Especially with the aid of that wind.

We moved along well enough, and were on the 10th green when we saw the McIroy party in the ninth fairway. Rory, carrying his own bag and wearing shorts, was playing with three pals, accompanied by a gallery of five or 10 older folks.

After playing the par-three 12th, Liz and I decided to leave our trolleys on the 13th tee, and walk back to watch.

The 12th played at 129 yards from my 6,700-yard tees, but was an uphill challenge. Anything short rolled down into a valley. Anything left risked landing in fescue or worse. And four bunkers stood ready to accept other misses. 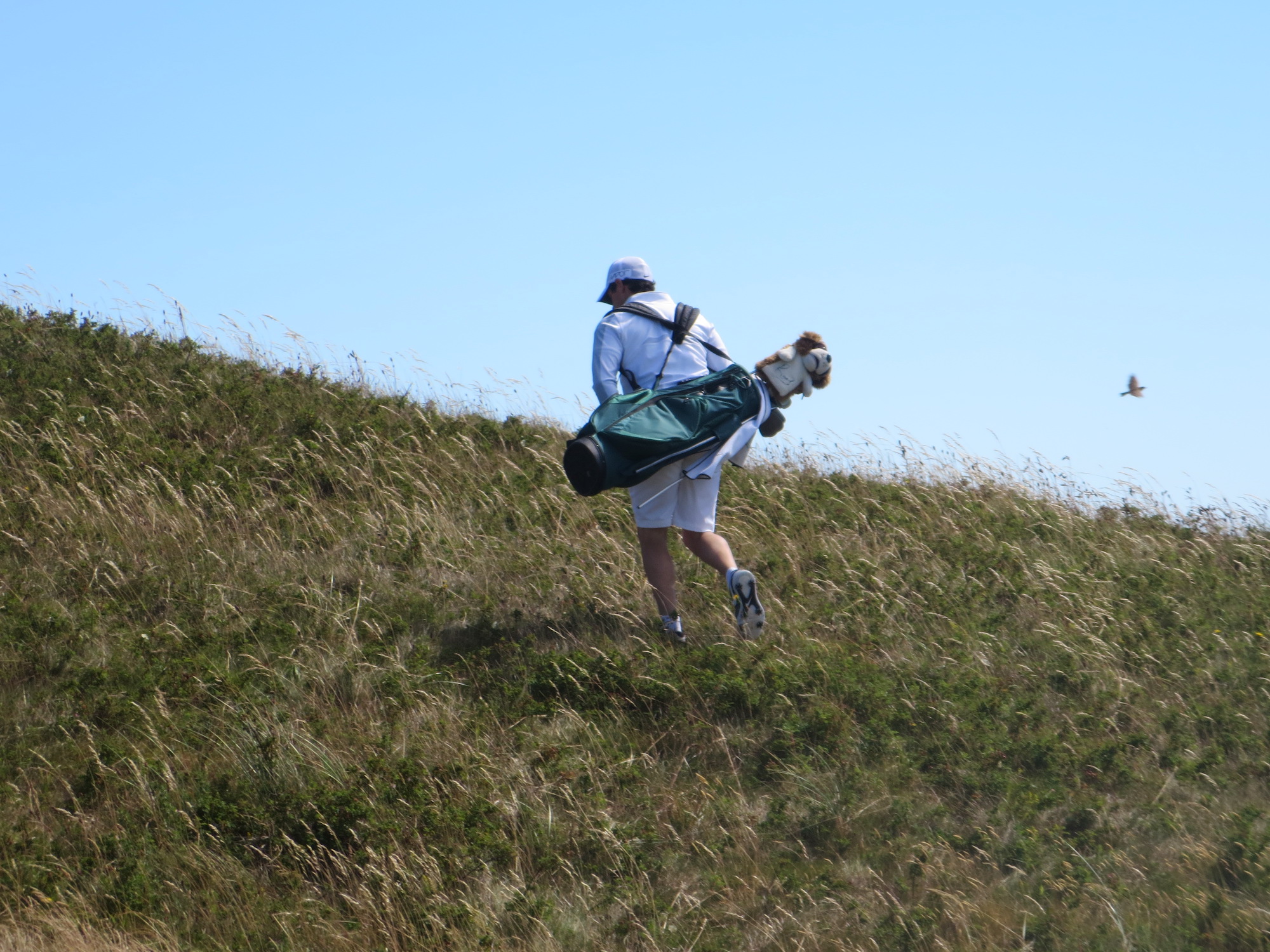 Rory takes a hike to the 13th tee to find his shot from the 12th tee.

Rory’s foursome teed it up from as far back as they could go, even beyond the listed 177-yard markers. And they paid the price.

Trying to gauge a stiff left-to-right wind, neither Rory or any of his pals came close to the green. And when we walked back up the hill behind Rory, members of his gallery were moving our trolleys so Rory could play his second shot from the 13th tee. 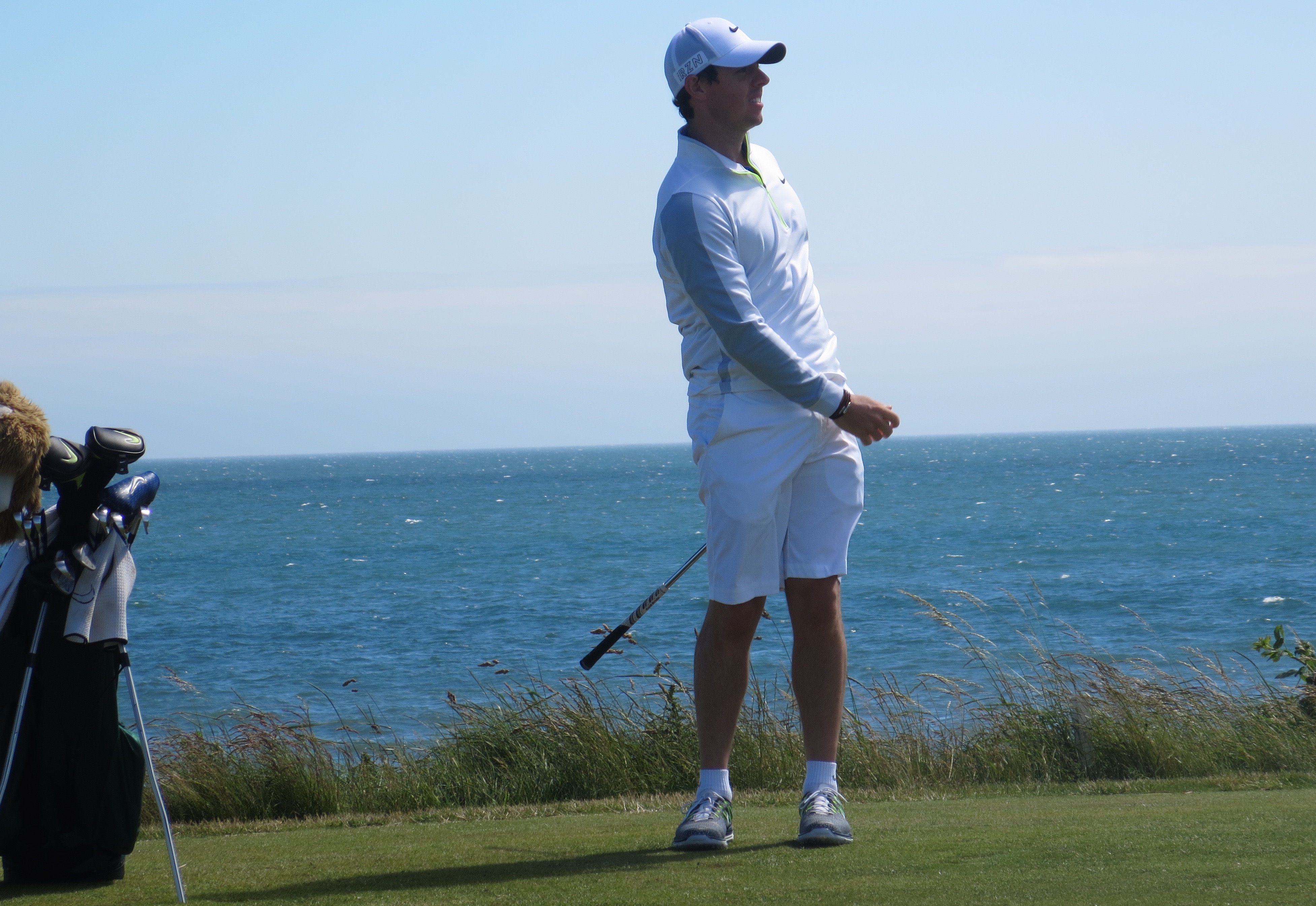 Rory wasn’t real happy with that tricky downwind pitch, which came up short.

He left his delicate downwind pitch short, but chipped close and saved bogey.

Not to worry. On the 13th hole, a 565-yard par five, McIlory made a routine eagle, crushing his drive to set up an enticing second shot.

And by the way, our close encounter with Rory occurred five days before McIlroy ruptured an ankle ligament playing soccer football with friends. We would have advised him to stick to golf. 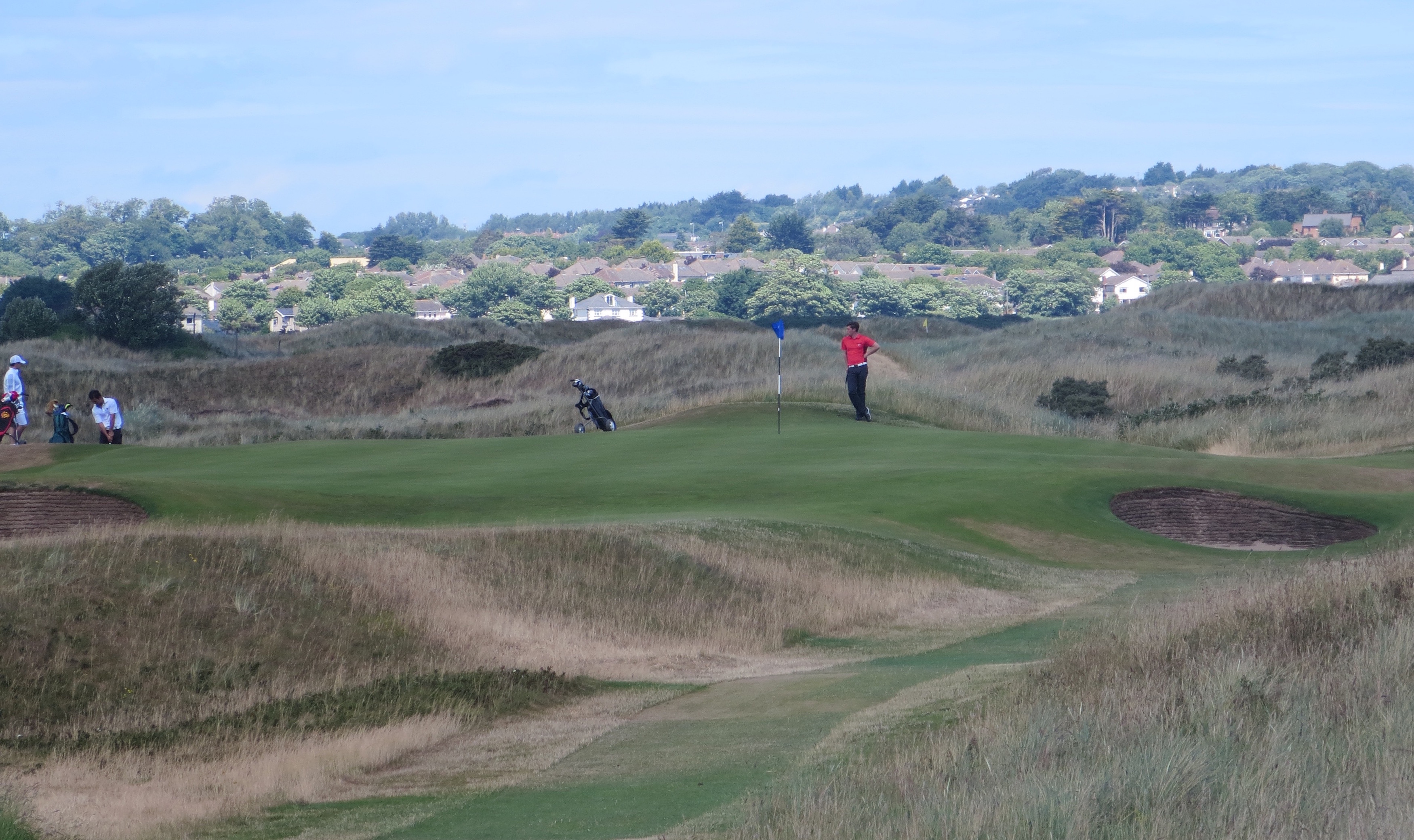 The Rory excitement behind us, Liz and I were able to get back to our own games.

On No. 14, which Henry Cotton called “the best par 4 in the world,’’ we both hit solid shots in front of the green that bounced up between two monstrous bunkers and rattled onto the green. Bouncing up the hill between the sand peril, the balls kicked left then swung around to the right onto the putting surface. That stuff is so fun to watch—when it works out.

On the par-three 15th, which Ben Crenshaw called “the shortest par 5 in the world,’’ Liz hit the green. Seemingly poised to join her, my tee shot bounced hard-left into a bunker. That shot wasn’t as fun to watch, but I managed to flail the ball out of the sand for a bogey.

After our round, we enjoyed the semi-obligatory opening-day platter of fish and chips, washed down by Guinness, while gazing out at the course.

A pleasant surprise to the start of our trip was the Evergreen B&B and the town of Malahide. Both are amazingly close to the Dublin airport. The Evergreen is a popular spot for travelers who have early-morning flights.

And Malahide is a quaint little town with a lovely harbor, just the right amount of shopping and an abundance of eating and drinking options. Among them is the upscale food court at the Malahide Castle, just outside of town. The spacious castle grounds are a popular spot for joggers. The castle also features pitch-and-putt practice opportunities.

We also had memorable meals at Sale e Pepe and the Greedy Goose. 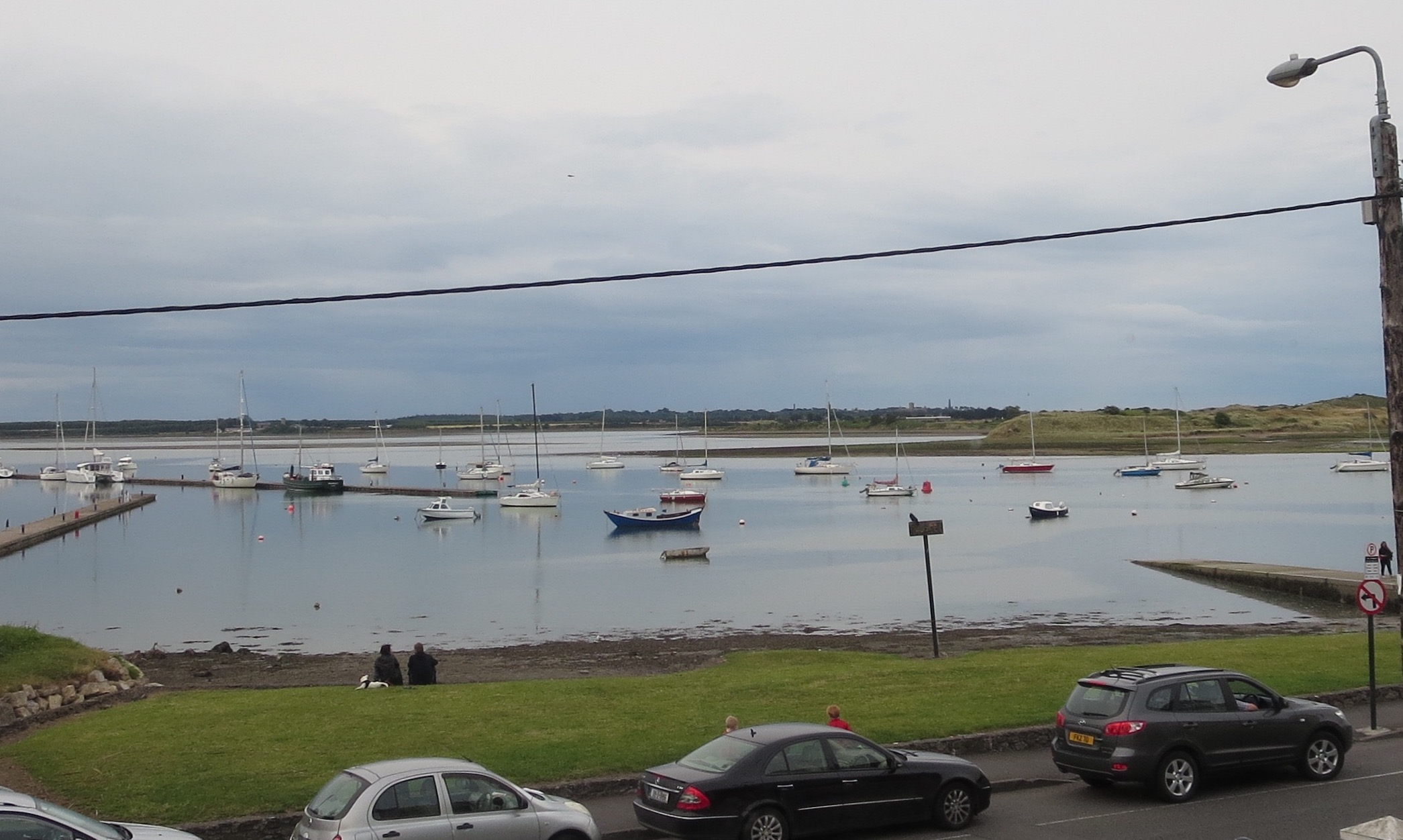 Malahide harbor, as seen from the Greedy Goose restaurant

Malahide not only features a quick train into Dublin. It also would make a good base camp for much more golf. Nearby are the Island, Royal Dublin and the Portmarnock Hotel Links, to name a few.

Time did not permit taking advantage of all those opportunities. Next time. . .