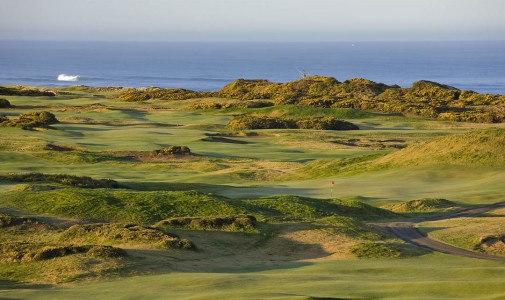 BANDON, Ore.—One friend wanted to see how many holes we could play in a day and a half. Something about wanting to get home to his 2-year-old daughter. Because we had been on the road for more than a week, that was understandable.

Another friend wanted to save the best for last. Nothing wrong with that.

What that meant, though, was that when we stood on the first tee of the new Old Macdonald Course at Bandon Dunes Golf Resort, we already had played 45 holes in 21  hours.

By the final tap-in, the happy-but-exhausting totals would be 63 holes in 26 hours. All walking. Even with hardy caddies, the conditions weren’t great to bring your ”A” game.

I can’t tell you how many times my partner, longtime Blackhawks broadcaster Pat Foley, and I looked at the glistening ocean, the misty layers of fog, the native grasses swaying in the breeze, the unabashed deer and then at each other and said, ”Whoa! It doesn’t get any better than this.”

Old Macdonald, which opened in May as the fourth course at Bandon Dunes, is an outstanding addition to an already-dazzling collection of courses on a remote stretch of the Oregon coast, five hours south of Portland. Expect it to join Pacific Dunes (14th), Bandon Dunes (33rd) and Bandon Trails (80th) among Golf Digest’s top 100 U.S. courses — closer to the top than the bottom.

Old Macdonald is an homage to Charles Blair Macdonald (1855-1939), who’s considered the father of U.S. golf architecture. He designed storied Chicago Golf Club, the first 18-hole course in the country. Macdonald was heavily influenced by St. Andrews, where he teed it up as a youngster with Young Tom Morris, and that’s what Bandon Dunes owner Mike Keiser of the Chicago area was going for.

From architects Tom Doak and Jim Urbina, Keiser got what he wanted.

It’s rarely about distance at Old Macdonald, which is surprisingly wide-open. It’s about the wind, which often whips in off the Pacific. And it’s about negotiating the greens, which are often huge, but also challenging to hit and tricky to read.

The first two holes, which are benign enough, are good acclimators. Overlooked by an ominously large and weathered decaying tree, they look like they’ve been there forever.

The road bunker at Old Macdonald is a perilous beauty, just like its St. Andrews ancestor.

On No. 3, the course starts to show its character while crossing over into the seaside plain that is home to the next 14 holes. After a blind tee shot over a huge sand dune, it’s all about landing a short second shot in the right place.

The 440-yard 10th hole, the longest par-4 on the course, is a good example of why length is overrated. While my friends were bombing their drives — one measured nearly 300 yards — and hitting wedges, I hit a 3-wood into the green. We ended up in the same place — trying to run the ball up a steep hill that collects second shots that roll down from the false front of the green.

That uphill chip shot could have been played with anything from a putter to a fairway wood. It was one of many places where Old Macdonald, like its ancestor St. Andrews, gives golfers a variety of options.

No. 11 is named the Road Hole for good reason. Like the famed 17th at St. Andrews, it features a sod-faced bunker to the front and left of the green. Foley landed in it and, after blasting out with one of the shots of the day, emerged beaming and shouting his trademark phrase, ”He scores!”

No. 16, the Alps, requires a blind second shot that’s reminiscent of the famed blind par-3 at Lahinch in Ireland. And the 18th, Punchbowl, has an immense diagonal green surrounded by steep mounds.

For all the magic of the day, by the middle of the back nine I was feeling sleep-deprived, a condition that only was worsened by a couple of close encounters with the nasty brush.

After negotiating Pacific Dunes and Bandon Dunes reasonably well, all I had left for Old Macdonald was a Pacific Coast Highway-like 101. Ugly, yes. But at the end of a golf marathon, it was par for the gorse.

BANDON DUNES GOLF RESORT: Complex of four 18-hole courses 260 miles south of Portland on the Pacific Coast. High-season greens fees (May through October) are $220 — with $110 replays — for those staying at the resort and $275 for those not staying at the resort. Walking only, caddie fees not included. An extensive 30-acre practice facility is free for resort guests.

ACCOMMODATIONS: High-season lodging options start at $200 for single occupancy and $300 for some shared doubles. For offseason rates, see bandondunesgolf.com or call (888) 345-6008.

GETTING THERE: United Express connects Southwest Oregon Regional Airport (a half-hour drive to Bandon Dunes) with Portland and San Francisco. Portland is five hours by car; Eugene is three hours.