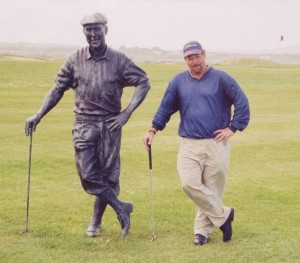 A big fan of golf statues, I strike the pose with this tribute to Payne Stewart at Waterville. I found him to be delightful and insightful when I interviewed him.

KILLARNEY, Ireland—No question, there are advantages to booking an Irish golf trip through a tour operator. Your hotels and your tee times are all arranged, and you don’t have to worry about driving on Ireland’s notoriously narrow roads.

But there are also advantages to making your own arrangements. For one, you have the flexibility to linger at an irresistible pub or scenic overlook on the Ring of Kerry, or to try your hand at one of the many hidden-gem golf courses that don’t make the guidebooks.
And driving yourself isn’t nearly as intimidating as it might seem. It can be part of the adventure. Yes, driving on the wrong side of the road takes some getting used to, and the roads make some Chicago alleys look like Interstate highways. But the routes are reasonably well-marked, if you keep in mind that Irish road signs often feature the names of towns rather than route numbers. And most importantly, you always have a better appreciation of a new land if you are behind the wheel.
My friend, Bob, and I discovered this on a June golfing extravaganza to southwestern Ireland, home to many of the Emerald Isle’s most breathtaking courses.

Our destinations included seaside classics such as Ballybunion, Tralee and LaHinch, which all lived up to their reputations as don’t-miss golfing experiences. It also included Waterville and the Dooks Golf Club, which also are popular linksland stops on the Ireland golfer’s itinerary. For balance, and a break from the maddening tall-grass rough and relentless wind, we teed it up at Fota Island and the Killarney Golf and Fishing Club, a pair of parkland courses that give a sense of Irish golf without draining your golf-ball supply. 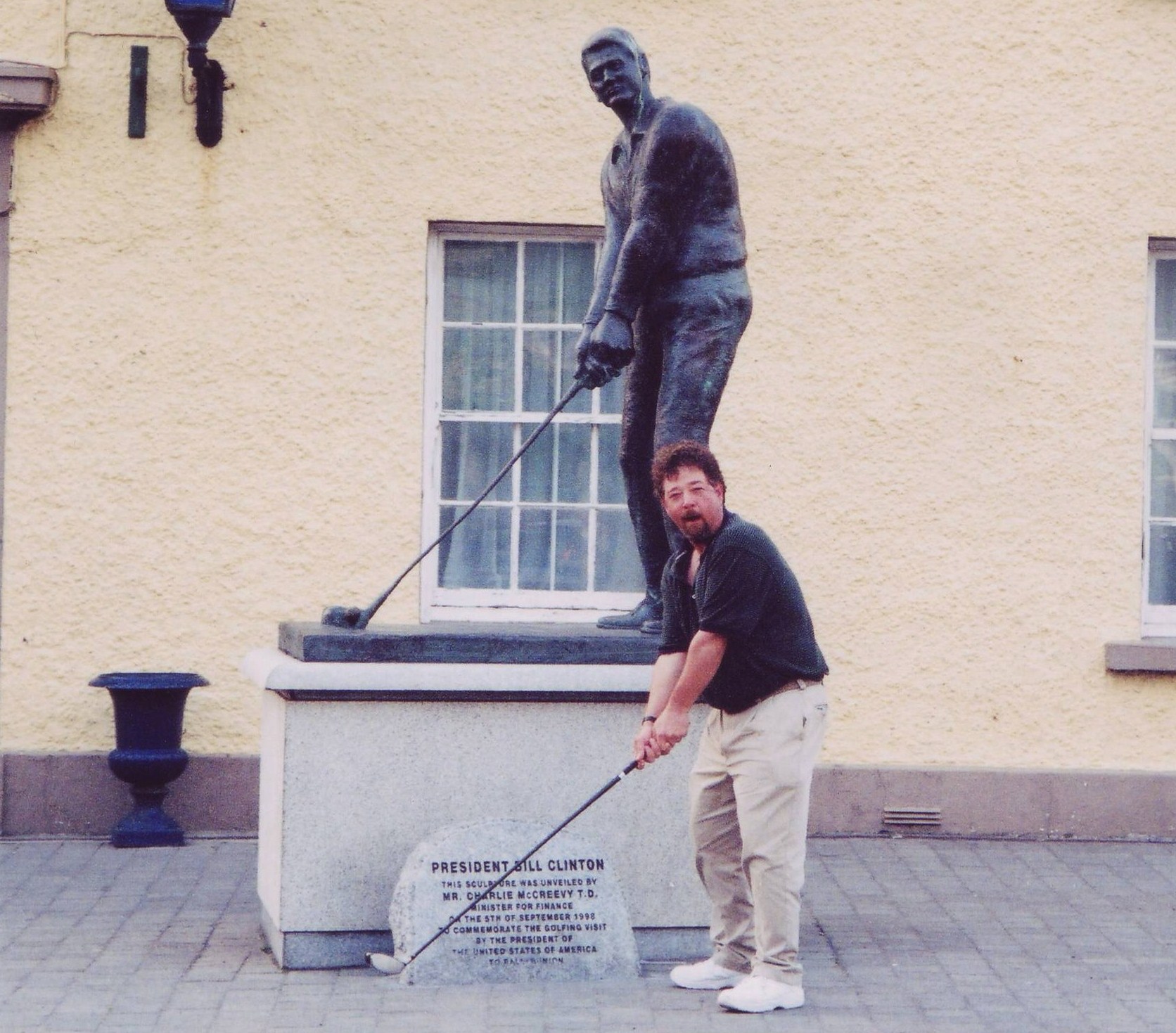 Here’s me and Bill Clinton in the town of Ballybunion. Now all I need is a statue of Dwight D. Eisenhower.

For an extra measure of the Irish golfing landscape, we played Old Head, a relatively new course that has a chance to become recognized among the world’s best. We also included the lesser-known Dingle Golf Club, Europe’s western-most golf course, which was as good as any of its more widely-recognized cousins. Don’t miss the seafood chowder or Dingle Bay prawns in their grill room, either.
Eleven rounds in nine days, and that was plenty for us. Many visitors play 36 holes a day, but that is a potentially draining experience that doesn’t allow for a decent meal or time to check out the Irish woolen-mills shops for gifts.

Plus, with one round a day, you have a chance to cope with Ireland’s wet and windy weather. Southwestern Ireland seemed like a northern version of Hawaii. Both are green, rocky and windy. And both are known for frequent showers that keep them green.
After we finished up an increasingly perilous round at the Dooks Club, for example, I saw a van full of German golfers donning foul-weather gear for their afternoon round after the storm had moved in. I sometimes wonder if they are still out there, battling sideways rain that seemed bent on throwing the ball right back in your face.
Having said that, in nine days of golfing, we encountered only one truly daunting rainy moment. (Lightning is apparently rare, and these courses showed no sign of closing for rain.)
We teed off at Tralee in foul-weather gear, prepared for the worst. A sign on the first tee advised us, “Wetting agent applied today. Not harmful,” an example of the cheerful Irish sense of humor we encountered so often. By the fifth hole, though, the rain had stopped. And by the 10th hole, the sun had come out, accompanied by a strong wind.
That’s a concept to keep in mind: When it comes to Irish golf, it’s either windy or rainy. 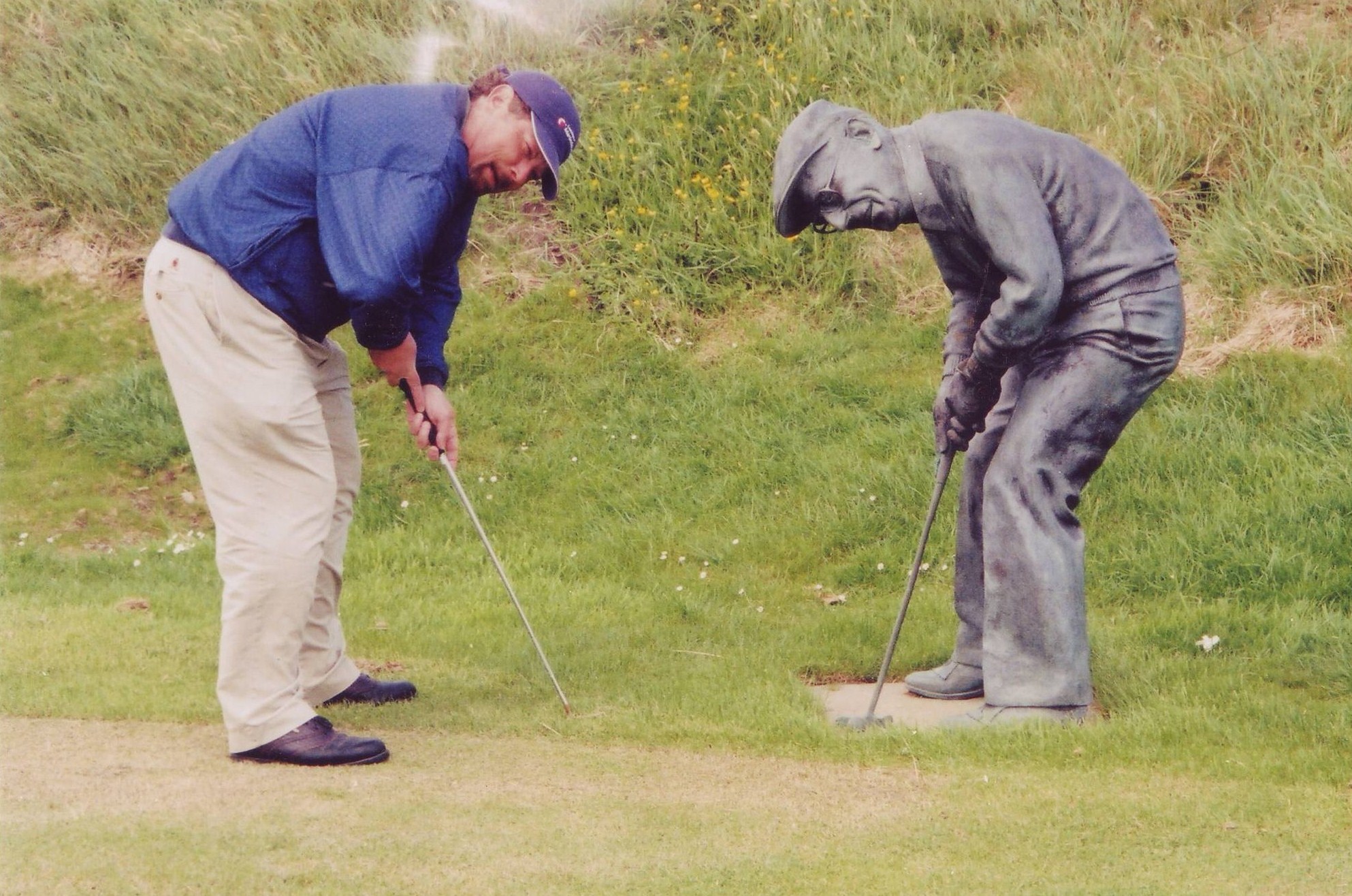 This is me and Waterville John

Concept No. 2: Don’t be surprised if your score balloons by about 10 or 15 shots, and don’t let that spoil your trip. True links golf, which is what the gems of southwest Ireland are all about, is very demanding. When you hit the ball in the high grasses that line the fairways, you’re often going to be pulling another ball out of your

pocket. And gauging the wind to hit the ball in a place where you can find it is no small feat.
Still, seaside golf is a marvelous experience. This is the way golf began. You’ll learn to use every club in your bag, and to use them in different ways. (The low, boring shot is a must in the wind.)
More importantly, the Irish people are fun-loving and gracious hosts. And the way many of the course are laid out, adjacent to the Atlantic Ocean or one of its inland fingers, such as the River Shannon or Dingle Bay, is a delight.

One of the pleasures of golf is that when you play it in a different country, you get a real sense of the land you are visiting. That could not be more true than in Ireland.
###