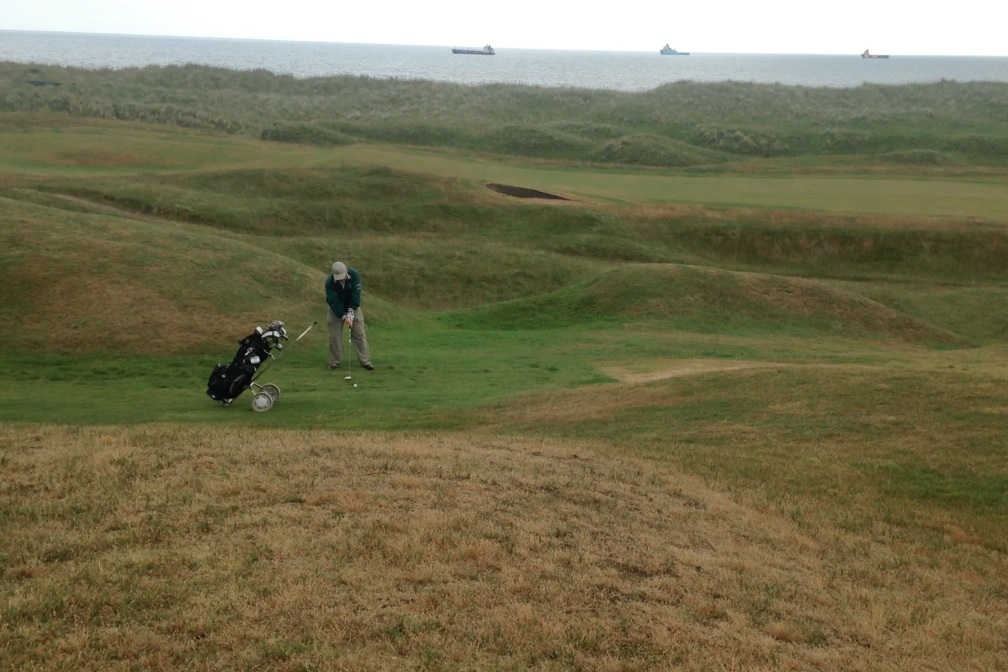 Murcar is pure seaside Scottish golf, even with oil-rig support craft lurking in the North Sea.

As we pulled into the car park at Murcar the day after our opening round at Cruden Bay, I was expecting a gentle, fun experience.

Murcar lies just outside Aberdeen, adjacent to Royal Abderdeen. We had heard several stories about Asian tourists, and even greenskeepers, who took a wrong turn  between Murcar’s third green and fourth tee—and ended up teeing off on or mowing at Royal Aberdeen’s adjacent 10th hole. Designed in 1909 by Archie Simpson, who was then the pro at Royal Aberdeen, and refined by James Braid in the ’30s, Murcar is an under-appreciated gem.

“The land at Murcar is very close to ideal,’’ James W. Finegan wrote in Blasted Heaths and Blessed Greens, his classic travelogue of Scotland’s finest courses. “Rumbling, linksland, great sandhills, gorse, heather, the spiky marram grass, even a couple of burns for good measure. . . the sandhills rise above one another. . . revealing the sea from almost every hole.’’

I didn’t know a lot about Murcar, which tends to be overshadowed by Royal Aberdeen and Cruden Bay, but assumed that since it lacked the notoriety of its two renowned north-of-Aberdeen neighbors, it would allow Liz and I an opportunity to bang the ball around without nearly as much pressure.

The little one-lane road, surrounded by a working farm with plenty of grazing cows that led to the course, did nothing to alter that view. The older woman setting her bag on a trolley in the car park seemed to confirm my assumption.

The Murcar staff and fellow golfers could not have been nicer. We’d planned to putt a bit before teeing off, but when we approached the first tee, a foursome—three young men and an older fellow—insisted that we go first.

The 305-yard first hole seemed to be further evidence that Murcar would show us a nice time. My hurried tee shot went down the left side, while Liz, went a bit right, but knocked her hybrid right in front of the green.

Cutting back to a six-iron from what is ordinarily hybrid distance for me, I expected to come up short of the greenside pot bunkers. Over-excited, I hit a low hard shot that was pulled slightly, reaching the left greenside bunker. Even so, I was encouraged by a shot that had carried so far and hadn’t missed by much.

The second hole was more of the same. 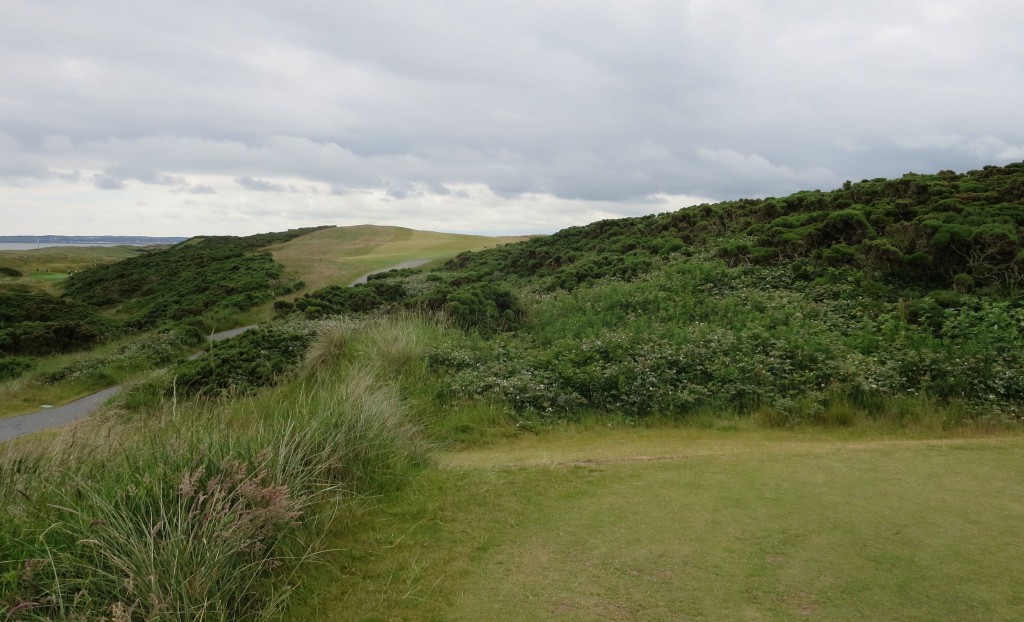 It was on the fourth tee that Murcar began to show its teeth. I stood on the elevated ground staring at what looked like a bathmat-sized patch of diagonal fairway. The tee shot not only had to go over mounds of heather and gorse; it had to nestle in between more heather and gorse. The approach to the green was no bargain, either.

This pattern continued for the next several holes, except on the 412-yard No. 7, which was a bit more open but featured a wide burn that cut across the fairway right about where my tee ball likes to land. 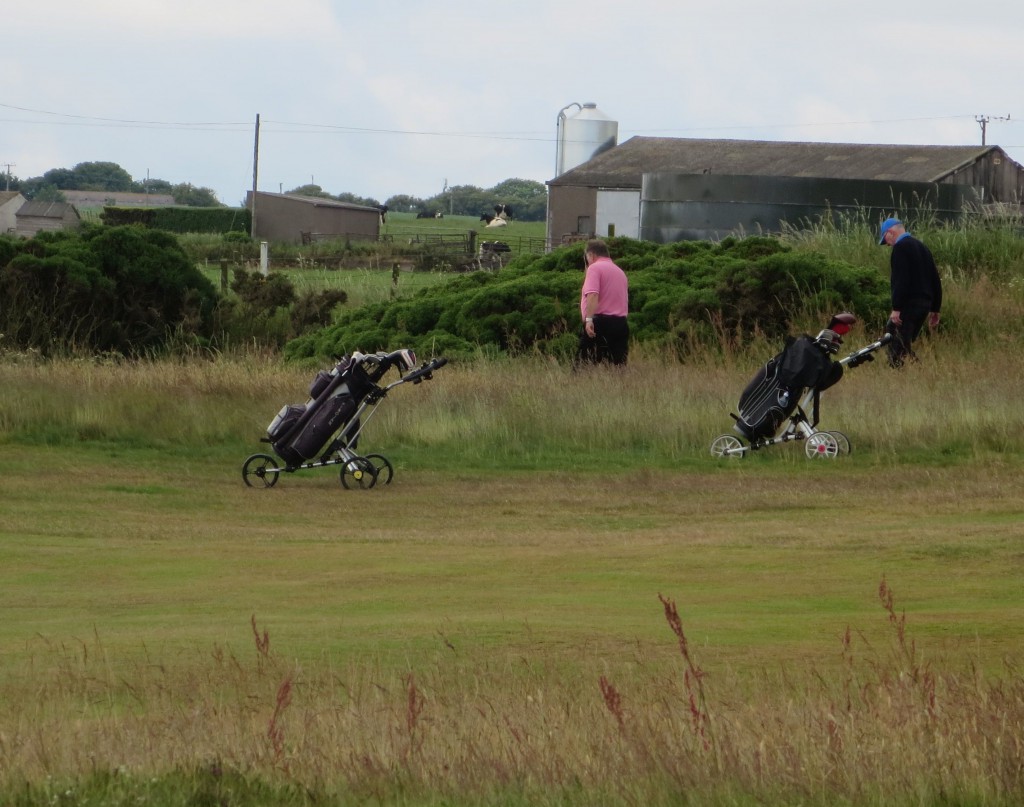 Steeling my resolve, I hit the ball as well as I can and carried the burn. That relief was short-lived. Reaching my fine tee shot, I realized I’d need to lay up on the next shot, a steep and narrow uphill climb to a hidden green. I wasn’t going to get there, and it made much more sense to punch the ball into the tight fairway rather than risk landing in the fescue.

“Depending on wind direction,’’ the course guides notes, “even the scratch golfer may be happy to settle for a bogey five here.’’

As our round continued, though, Murcar eased up. The inward nine offered a string of holes that were less penal and more fun. The blind tee shots at least were roomy, and the downhill approaches were a treat. 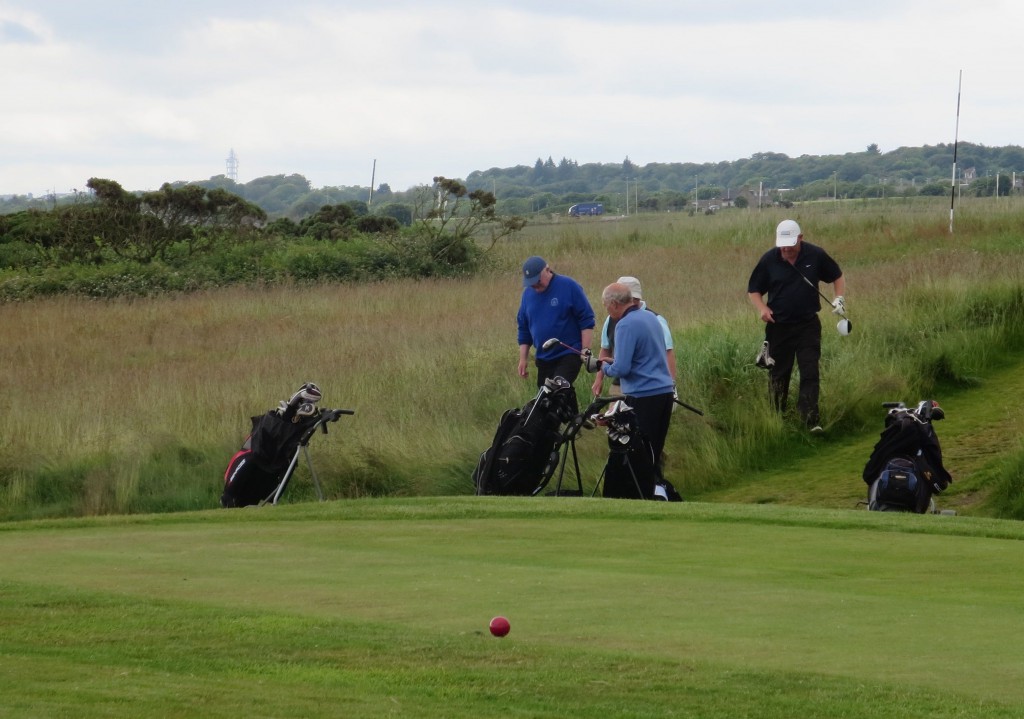 Liz skirted the well-bunkered par-three 13th for a nice birdie look. And despite a weak tee shot on No. 14, I was able to trundle a long approach onto the sunken green. The 241-yard No. 15 is a pure gem. The tee shot doesn’t need to be long, but the second shot, over a burn to a steep hilltop green, demands plenty of attention.

As we packed our bags in our rental car, I understood why we hadn’t seen any women on Murcar, which had provided Liz with some exceedingly difficult tee shots from the no-nonsense red tees. The ladies had played the nine-hole course, which, judging by the first tee, wasn’t nearly as daunting.

In the clubhouse, Liz and I found a nice table and ordered up a tremendous lunch of home-made pate and salmon cakes, washed down by a couple of pints. The kitchen was as great a find as the golf course. 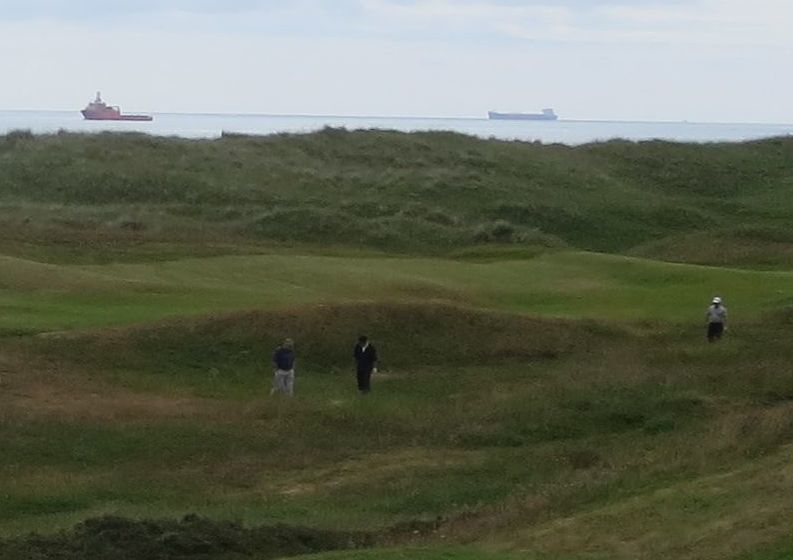 We also gained a better appreciation for the fangs of Murcar. For one, the course had recently hosted a tournament, the Northern Open, and was still primed to play even more difficult than its usual testing self. 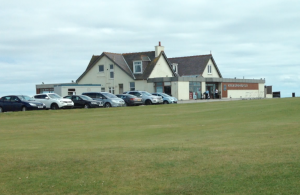 Don’t be fooled by Murcar’s modest clubhouse. It leads to a formidable golf course outside–and a formidable kitchen inside.

For another, club secretary Carol O’Neill explained, Murcar’s membership has the highest percentage of low handicappers in Scotland, and they like a challenge. The previous club champion, a plus-3, hadn’t even graduated, she said, to the match-play round of 16 in his bid to defend his title.

That said, Murcar was a thoroughly enjoyable course. There were a bunch of terrific holes that took advantage of the course’s hilly seaside terrain, and the views of the North Sea beyond the stark hills were breathtaking. As I look back, there might not have been as many scary tee shots as I first believed. Beginning with the fourth hole, I let them get in my head a bit, a mistake I wouldn’t make again if I have another opportunity to tee it up there.

That’s an opportunity I would relish.