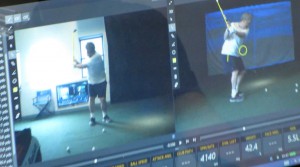 After that season-opening round, I was wiped out and hurting.

The fatigue part, I could chalk up to spring training.    The aches and pains were a little more troubling. My right heel was throbbing. As chronic as that has become—I vaguely remembering first injuring the heel playing softball when Jimmy Carter was in the White House—I know I need to have that checked for an on-again-off-again bone-spur issue.

In addition, my old golf nemesis, the pulled side muscle, just above the hip, had returned. It was on the left side, rather than the right side. And history has taught me that once it happens, it doesn’t go away quickly. Which means Aleve/Advil sales are going to rise.

And so, I went to the Catalyst Golf facility the next day with trepidations. I was banged up physically. And in my mind, I was preparing myself for the possibility that I wasn’t going to be able to do much about my tired old swing.

Thinking about my next visit to the Catalyst Golf performance center, I was thinking, “What’s the use?’’

What came next could not have been more surprising.

It was the second day of Masters golf, and the guys had planned a Masters-watching get-together with food and beverage, and rounds of golf at Dubsdread, via the Trackman simulator.

During my workout, I mentioned my throbbing-heel issue to trainer Tommy Asuma, and he suggested rolling the heel with a tennis ball or a golf ball, to get some blood flowing in the afflicted area. (I tried this, and found it an excellent tip.)

Tommy put me through a workout that concentrated on strengthening my feeble hip turn—the one that has been driving Joe bananas.

“You’ve been talking to Joe,’’ I said to Tommy.

By the end of the workout, Tommy had called Joe over, to see if Joe had anything to add to the exercises Tommy had prescribed.

Basically, the exercises involve having me stand in golf position and, using a weight machine, go through variations on a golf swing with weight resistance. The exercise simulates the downswing and the follow-through from various angles, and are performed on both the right and left sides. 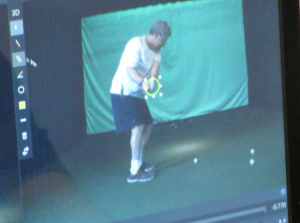 The clubhead, once off the screen, is now working right behind the hands.

To my surprise, I was able to do these exercises without feeling pain from my sore side-muscle area. Still, I approached the Trackman simulator wondering if the tender area would balk at hard golf swings.

First, I gave Joe a brief rundown of my first golf round of the season: “I hit some decent shots that incorporated what we’ve been working on, but not enough of them.’’

He took that in for a moment, then said, “All right. Let’s see some practice swings. Keep the backswing short. This is a just a drill. And then I want to see a hard swing and a full finish.’’

Focusing, I locked into the moment. There was no side-muscle pain; that was a non-issue. Unlike the day before, I was not on the golf course, so there was no produce-a-good-shot issue, either.

“Faster backswing. Faster through the ball,’’ Joe said. “Just give me a really hard chipshot.’’

So I did that. A really violent, forceful chipshot.

The ball shot off of the clubhead.

After a few more of these, Joe had me put the club down and do some drills aimed at producing the hip turn that I have never been able to do—the absent hip turn that’s one of the main reasons I fail to generate so little power, even though my arms have been wrapped around my neck for decades.

Drill No. 1: Stand in golf posture with arms folded across the chest, then fire the right hip 10 times. For good measure, fire the left hip on the way back.

Drill No. 2: Standing in golf posture with arms folded, turn the shoulders for a simulated swing and complete the swing with a strong finish. 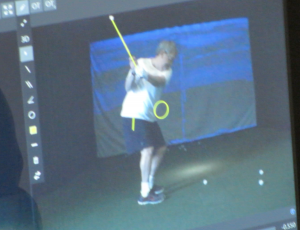 Playing the angles is a key to a better swing.

Drill No. 3: Standing in golf posture with the hands at the top of the back, fire the hip and bring down the hands 10 times.

Drills No. 3 and 4: Make the same hip-firing move with a whippy training device, then repeat with a golfclub shaft.

Finally, make a practice swing with a 9-iron and produce a forceful half-swing shot.

I do this and the ball goes as far it did as it managed to go with my wrap-the-club-around-the-neck move when I walked into Catalyst with several weeks earlier.

I take several more shots. The ball jumps off the club.

I feel my short takeaway getting to the right backswing position. I feel my right hand hitting the ball with a strong descending blow. Heck, I even feel my right hip firing into the shot.

We look at the shots on the Trackman video. The club goes no further than perpendicular to the ground. The hip starts the move before the hands. The finish, while still awkward, is closer to the left side than I’ve ever gotten.

“This is a real breakthrough day,’’ Joe says, and I nod in agreement.

As I watch the replays, I realize that my swing has a lot in common with that 84-year-old Arnold Palmer swing that has been on television all week. The good ones might approach the 74-year-old Jack Nicklaus swing, which is a tad more flexible.

How ironic, I realize, that when I was young and they were in their prime, I was utterly incapable of copying their swings. Now that we’re all old and creaky, my swing is much closer to theirs.

I also realize that my swing has absolutely nothing in common with the pros who are playing in the actual Masters. But at my age, that’s the way it goes.

No worries. I can feel the beginnings of a hip turn. Joe even stops the video at a spot where my club has a hint of torque as I transition into the downswing.

This is a real breakthrough day, indeed. Now, the question is, will the sore muscle above the hip and the throbbing heel diminish enough each day for me to build on the hip-turn progress?

After several days of practicing the moves at home, and returning for another lesson, the aching muscle above the hip is improved but still a pain.

But that’s a small price to pay. Like the sore muscle, my golf swing is headed in the right direction. I’m now feeling good about grooving the compact swing to the point where it can tweaked and lengthened a bit—to produce longer shots while maintaining strong fundamentals.

That’s a very good place to be in the middle of April. Now all we need is for the latest snow and cold wave to disappear—what’s up with that, Chicago?—so I can take this new swing out for a spin.

NOTE: This is the 10th in a series on trying to improve a golf swing that’s become problematic—and developing more flexibility, balance and general fitness along the way. The whole series can be found at  http://theaposition.com/herbgould/golf/instruction