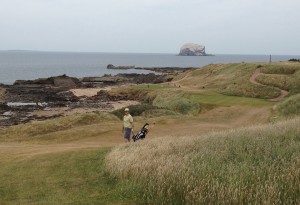 No. 14 at the Glen Golf Club, also known as the East Links, with 13th green and Bass Rock in background.

NORTH BERWICK, Scotland—It’s a little more than an hour by car from St. Andrews to Edinburgh, a little less than an hour from Edinburgh to North Berwick—and so, about two hours in all, from the home of golf to Scotland’s Golf Coast.

But the roads are good, real full-fledged highways in many cases, not like that harrowing two-laner around Ireland’s enchanting Ring of Kerry where I nearly made lamb stew several times.

And so, we reluctantly departed St. Andrews on Tuesday for our next stop, the quaint town of North Berwick (pronounced Bear-ick), which has many St. Andrews-like touches. On the way, we stopped off at Muirfield, where the British Open would begin two days later.

We were unable to play there, of course. That’s an adventure for another visit. But I did check in for my Open credential and catch Phil Mickelson talk optimistically about his game. And then I wrote a column explaining why Phil, who supposedly didn’t have the right kind of game for Open play, might be ready to win at Muirfield: http://www.suntimes.com/sports/golf/21360540-419/phil-mickelson-ready-to-make-run-at-british-open.html

And if you happened to put down a pound or two on Mickelson at a British betting shop, you’re welcome. (I certainly didn’t. Wouldn’t be proper for a sportswriter.)

From there, we proceeded on to North Berwick, where we had booked a B&B for Open week—but only after a dedicated online search 10 months earlier and only at a premium rate. That’s because we were only 3.9 miles from the first green at Muirfield, according to my Golfshot GPS.

The Garden Flat was well worth it. It was a block from the 18th tee of the North Berwick West Links and one of the town’s many paths to the Firth of Forth. We caught up with our friends Susan and Ron there, and were joined by Jill and Rick. Exactly one year earlier, while rising early to watch the Open during our annual summer vacation in Sister Bay, Wis., we had said, “Let’s just go to the Open next year.’’

And so, here we were.

To celebrate, we had dinner that night at the Rocks, an outstanding inn in Dunbar, just down the road from North Berwick. The Rocks sent a van for us, and that worked out so well, we hired the van again to take us the next night to the Waterloo Bistro in Haddington.

Susan had taken charge of booking the dinners, and did an outstanding job. If anybody ever tells you Scottish food isn’t up to snuff, check out the Rocks or the Waterloo. Local catches including lobster and sea bass are amazing, and pork tenderloin and chicken from the surrounding area also are prepared with flair.

We also had excellent meals at any number of mouth-watering places in North Berwick, restaurants that would rate top marks with our best dining back home in Chicago.

Even the Chinese restaurant, Lucky House, where we had takeout one night, was major league. Our only quibbles: The delivery driver had the night off. And they didn’t offer throw-away chop sticks for takeout.

“If you want chop sticks, come sit down in the restaurant,’’ a beleaguered manager told us toward the end of Open week, which is sort of like Super Bowl week in Scotland.

We also had highly recommended experiences at the Fly-Half Bar & Grill, in the Nether Abbey Hotel, and the Library and Deveau’s Brasserie, in the Open Arms Hotel in nearby Dirleton. Both offer outstanding menus in comfortable settings. And be sure to save room for the Malt of the Month.

Which reminds me of a quirky aspect that surprised me in the home of golf and single malts. After our first meal in Scotland, I couldn’t resist trying the Malt of the Month, which was Oban, a single malt that I had sipped a wee bit of while covering the NCAA tournament in Austin, Tex., last March.

When served, though, I was disappointed to be brought a paltry amount of Scotch. Back home, I might have commented to the staff about a poor pour like that, but I said nothing because the rest of the meal, food and service, had been so outstanding.

When we decided to have a nightcap in the Scores Hotel, I watched the bartender carefully pour out a similarly miniscule amount with a tiny measuring instrument.

Talking to the bartender, I realized that in Scotland, this is the way it is done. It’s not a bad idea. The price of a double in Scotland is more in line with an ordinary Scotch in the U.S., so you can order more if you want more. That means customers are less likely to be over-served; they also are able to try a greater variety of in Scotland’s finest without overdoing it.

Once I adjusted to the concept, I had no problem with it.

On Wednesday, the day before the Open began, we revised our plan to watch practice and decided to play ourselves. That wasn’t easy as it sounded. The famed West Links of North Berwick had no tee times, but their pro shop advised us to try the Glen, saying the other course in town was a really fun track that we would enjoy.

Ron quickly called the Glen, where we were told we could play if we could get there in 25 minutes. I was skeptical, but we were assured the course was extremely close, and it was.

We hustled over, and while Liz and I pulled our clubs out of the car, Ron and Rick headed to the pro shop, where the pro gave them great sets of TaylorMade rentals, and included them in the price of the greens fee.

Moments later, we were standing on the tee of the 330-yard first hole, an ominous-looking starter where you need to drive your ball 200 yards down a wide-open fairway, guarded by a solitary pot bunker, to set up a second shot that is basically a short-iron pitch straight up a hill to an unseen green nestled between grassy mounds. 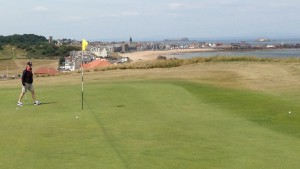 You can’t see the first fairway from the high-perched first green at the Glen Club. But you do have a panoramic view of North Berwick.

After negotiating that shot, we made the steep climb and found that all of our balls had run through the quick, firm green, leaving us putts or chips back toward the hole.

That was followed by another short downwind par-four, which was followed by a short, downwind, down hill par-four where Liz hit an epic, bounding drive. Swinging from the heels, we fellows all missed the fairway, but remained within reach of the green.

I had a feeling things were going to change on the inward into-the-wind nine, but decided to enjoy this while it lasted.

What followed were a succession of engaging holes that had pot bunkers and fescue, but also enough room to let you enjoy the game. Even the into-the-wind holes proved to be manageable, particularly for a lowball hitter like me.

Adding to the enjoyment were the views of Bass Rock, a stony bird sanctuary just off the coast in the Firth of Forth, and even the 14th-century Tantallon Castle. It didn’t hurt that we were blessed by another balmy, sunny day where the temperature was in the 70s.

At the signature Sea Hole, a 136-yard par-three where it’s easy to push the ball over the cliff on the right side, club selection was not easy. We were into the wind and the shot was all carry, with a hill to the left that obscured a big part of the green.

I yanked my tee shot way left, but was pleasantly surprised to see the ball end up on the back fringe, not far from the back-left pin, after it apparently banked hard off the side of the hill and rolled down to its final resting place.

The Glen Golf Club, which was organized into a nine-hole layout in 1894 after centuries of informal play and expanded to 18 holes in 1906 by noted designers Ben Sayers and James Braid, is more of a hybrid than a links course. Most of the course sits up on a hill, which provides spectacular views of North Berwick and the Firth of Forth.

That said, the Glen, also known as the East Links, is not considered in the same league with North Berwick’s West Links, a seaside classic that is rated among the top 10 courses in Scotland and the top 100 in the world. 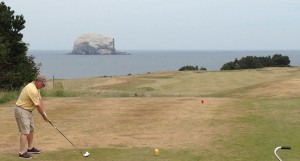 No. 12 at the Glen is a big, cascading downhill par 4. Aim to the right of Bass Rock.

I have no argument with that. The West Links (to be discussed in detail soon) is a special golf course, with unique and ground-breaking holes. It’s also a much better test for top-notch golfers. Mickelson recalled that he played his first Open qualifier there as a young golfer, and Bubba Watson played the West Links just before this year’s Open, finishing with a gallery that was approaching 100 appreciative spectators.

By the end of the day, I realized the Glen Golf Club was the East Links that my friend Art Spander, the dear columnist from the San Francisco area, had advised me to avoid. Art had been so emphatic about it, I’m glad I didn’t realize the Glen and the East Links were the same—because I might have missed a wonderful golf course.

I told him this a couple of days later at the Open, saying, “Art, we had a great time there. How could you not like that course?’’

He then launched into the explanation. He had played it in a rainy gale, and the eccentric first hole had been directly into the wind, making it almost unplayable. He then noted it wasn’t a true links course, and certainly couldn’t hold a candle to the West Course.

No question, the weather can alter your view of a golf course, especially in Scotland, where the weather can get seriously ugly. All I could do was smile at Art, and when he had finished his rant, advise him to give the course another try.

I certainly would welcome that opportunity.