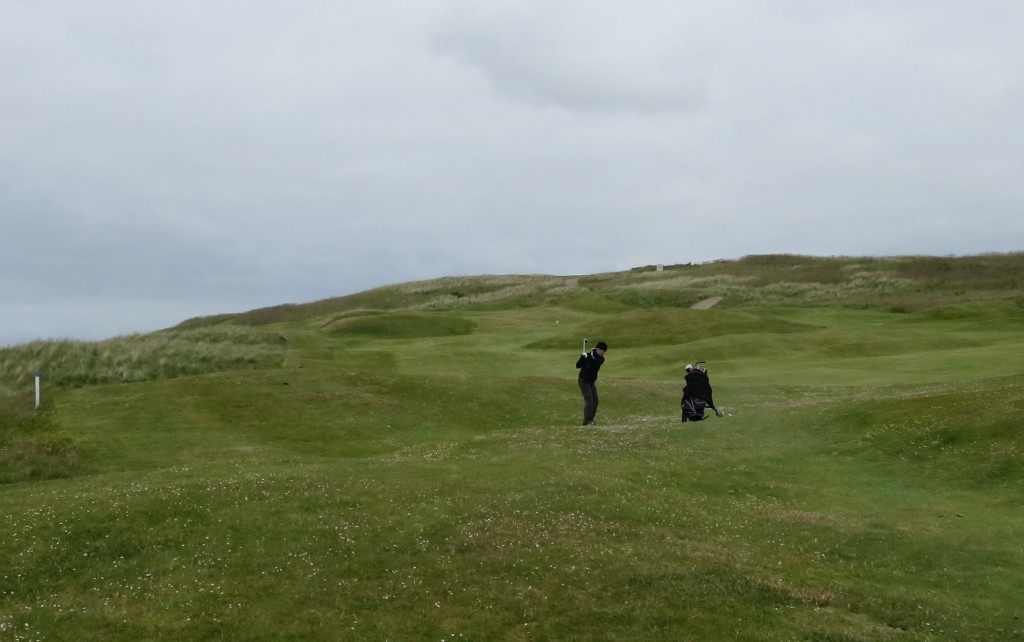 The GPS, which took us inland from Aberdeen even though the coastal route seemed like the way to go, wasn’t sure how to get to Royal Fraserburgh.

But Liz had fun careening our little red Ford Focus down some exceedingly narrow roads while I tried to sort out the map. So it all worked out. About an hour north of our Aberdeen base, we pulled into the car park of “the seventh oldest course in the world.’’ 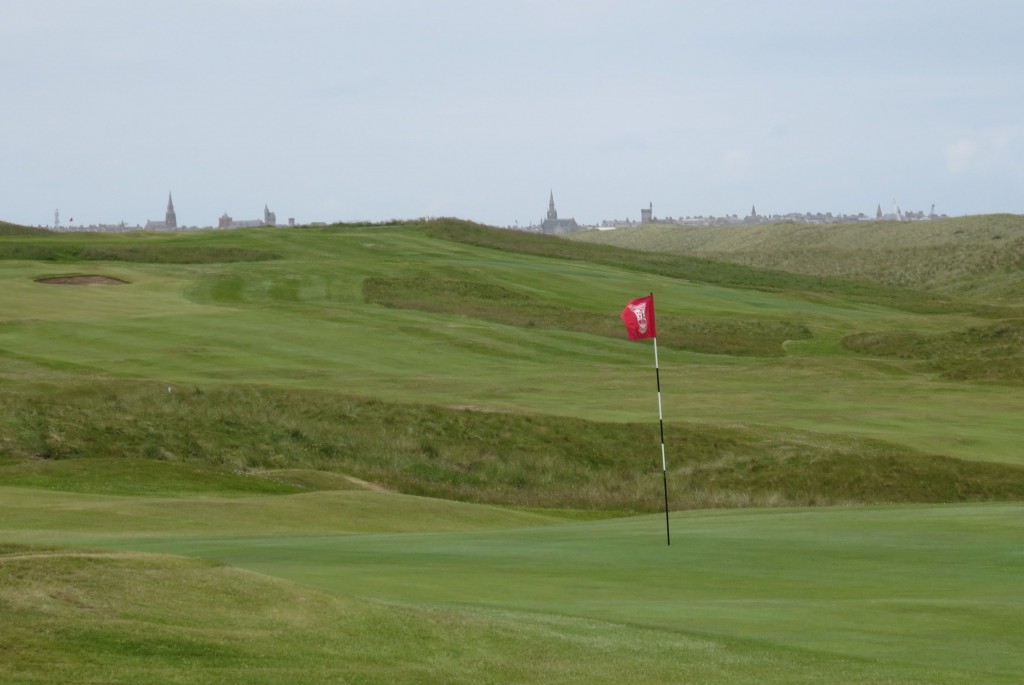 The town of Fraserburgh lies just west of the golf course. Both sit next to the North Sea.

While golf has been played at Fraserburgh since 1613, the current layout was set by James Braid in 1922. A five-time British Open champion. Braid (1870-1950) was a prolific golf course architect in Scotland, apparently as prolfiic and highly regarded as Donald Ross (1872-1948) was in the United States.

It appears that there’s a “George Washington slept here’’ aspect to both of their careers. Both seem to have worked on an amazing number of golf courses. 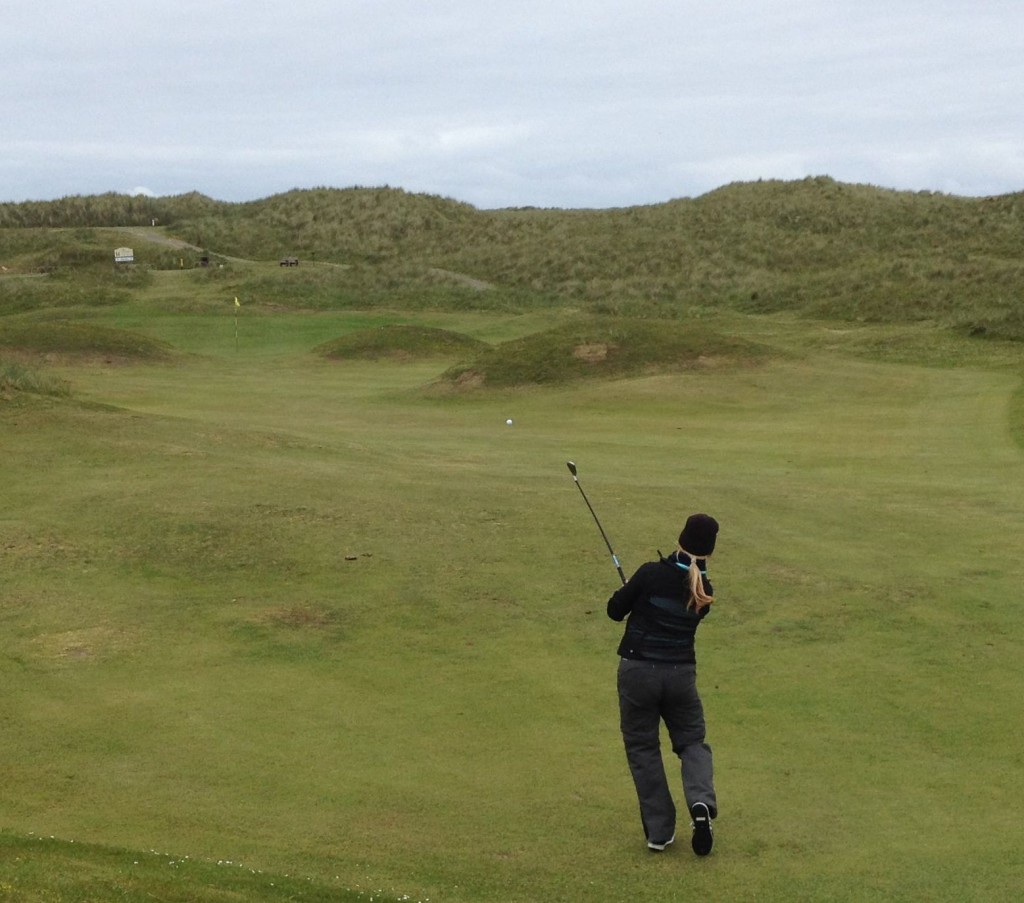 For example, when we were in Detroit a few years ago, I was looking for a close-in golf course that we could sneak off to before a Blackhawks-Red Wings playoff game, and stumbled across Warren Valley, a Wayne Country facility in Dearborn Heights that said it had two Donald Ross courses.

When I called, the woman who answered said tee times were available and the greens fees were under $30.

“Are these really Donald Ross courses?’’ I said.

He did good work, though, while he was there.

What we found at Royal Fraserburgh was a really fun, low-keyed golfing experience that will give your golf swing and your wallet a break from the rigors of more unforgiving courses.

Fraserburgh has a bunch of really good holes that take advantage of Corbie Hill and the other dunes that rise and fall along North Sea.

The first hole is pretty routine, a flat and open 404-yard warmup opportunity. From there, though, there’s plenty of terrain, and Braid used it well. No. 2, 363 yards from the visiting men’s tee, rises straight up to a plateau green. No. 3 goes back down to a pot-bunker-guarded green.

No. 4 is a mere uphill 307 yards, but demands a crafty approach to a thin green that’s guarded by gorse on one side and a pot bunker on the other. No. 5 is a blind-shot 180-yard par three over a mound.

All in all, Fraserburgh does not lack for fun holes. The back nine begins with a 277-yard dogleg right to an unseen undulating green guarded by mounds. No. 11 is a short uphill grip–it-and-rip-it par-four. The 13th, just 305 yards, has one set of ominous, tall mounds to catch tee shots and another set of mounds in front of the green that will turn low approaches into pinball-like enigmas.

Low-handicappers who are on their game are likely to gobble up Royal Fraserburgh. That wouldn’t be a problem for me, even if I had that kind of game.

Another issue with Fraserburgh, a talented young Aberdeen golfer told me, is that the town is a sleepy fishing village that didn’t excite him. That might be a plus for Liz and I. We didn’t have a chance to go into town, but I’m thinking an out-of-the-way fishing village probably has a reasonable dining option or two.

We really enjoyed our round there. It was fun and peaceful, and the views of the town and the sea from the golf course were were excellent.

If we’re in the neighborhood, it’s definitely on the “return’’ list.