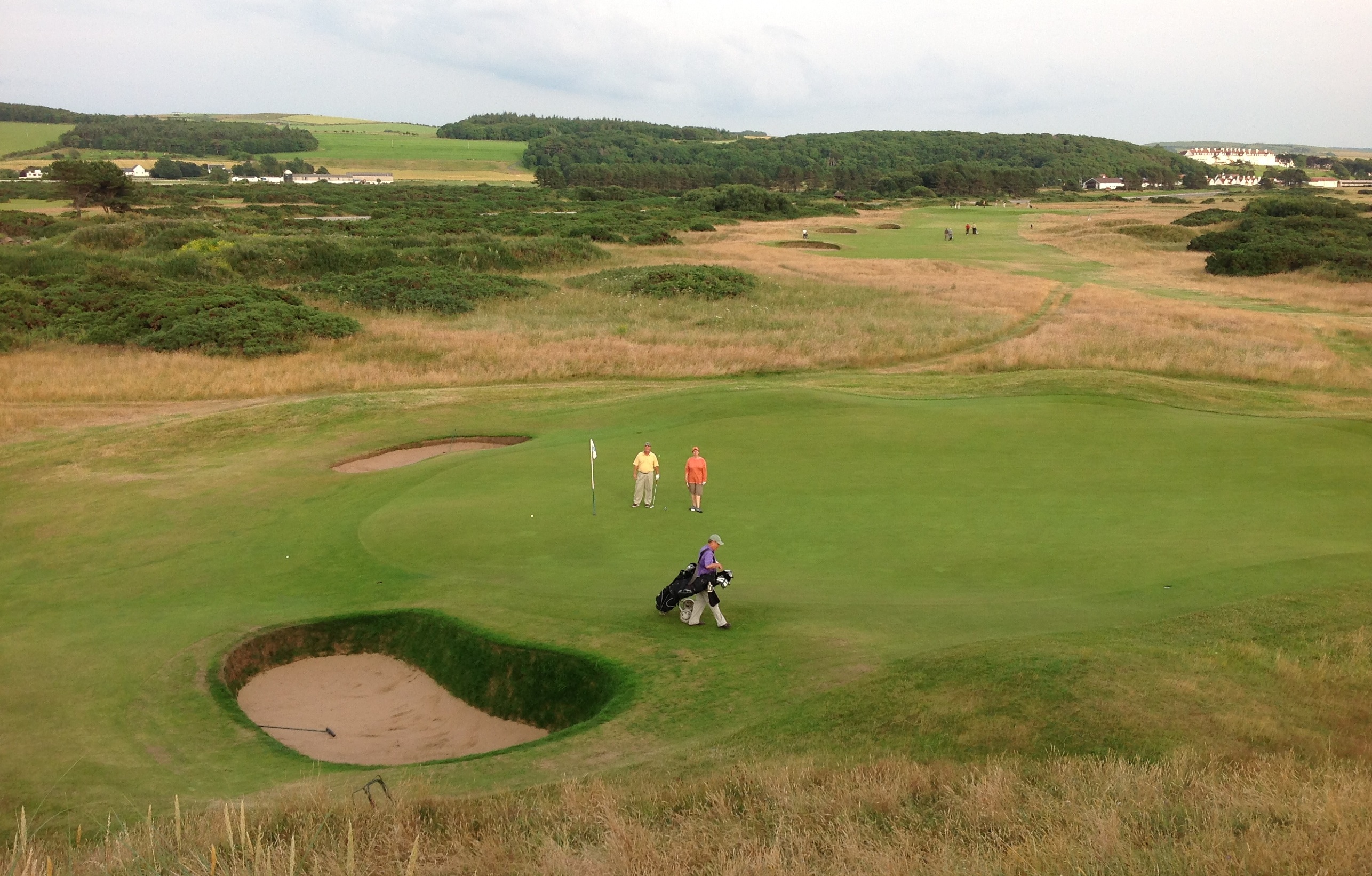 At Turnberry, the golf course wends its way through the terrain.

Golf should be fast and firm. The game is way more fun when the ball rolls.

That’s why my wife, Liz, will be off to Ireland soon. You don’t have to bomb the ball to have a blast on links courses.

It’s the way the game began centuries ago in Scotland. And it makes great sense today, when golf wants to keep costs down and be environmentally savvy as well as let mere mortals enjoy their skulled ground balls.

This 2015 U.S. Open at linksy Chambers Bay is going to spark more talk about links golf and the back-to-natural movement.

[See The A Position’s “What to Watch For” guide and much more about Chambers Bay in the 2015 U.S. Open edition of The Grain.]

That’s especially true because our national championship is in the midst of a five-year stretch of “green’’ golf courses.

Last year’s Open at Pinehurst No. 2, which had been restored to its historic ungroomed roots, put the discussion on center stage. Next year’s Open will be played at Oakmont, the Pittsburgh-area course that removed thousands of trees before the 2007 Open to get back to its linksy roots.

In 2017, the Open will be played at Erin Hills, the Irish links-style course outside of Milwaukee. Like Chambers Bay, it is a public course that emphasizes the natural design and vegetation that are golf’s heritage. In 2018, the Open will return to Shinnecock Hills, the historic Long Island old-school links layout.

The emphasis these days is on what USGA officials and other keepers of the game call “sustainability,’’ with the goal of making golf more environmentally friendly and more viable economically by moving away from the over-manicured private clubs that used to be considered the ultimate in golf for weekend hackers as well as touring pros.

The best part about the back-to-nature trend, though, is that it makes the game more enjoyable for average golfers. 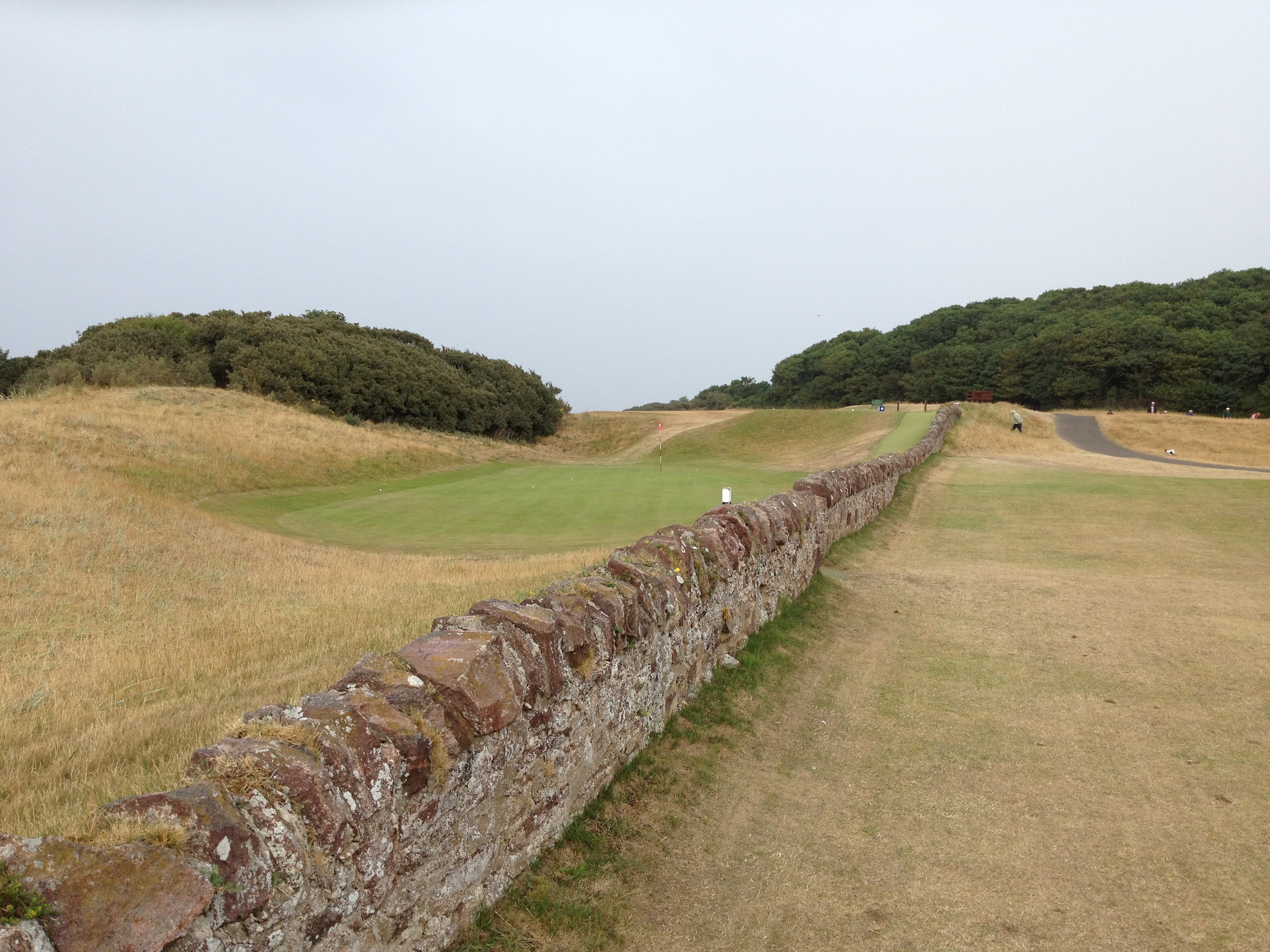 An ancient stonewall is a perfectly natural hazard at North Berwick

I was especially pleased to hear Whitten and Lawrence, two of the most respected writers on golf-course design, articulate the same points that make Scotland and Ireland so irresistible to Liz and I.

“If you have a soggy golf course, it’s no fun to play,’’ said Whitten, a co-designer of the original Erin Hills layout, a routing that relied heavily on the natural contours and fescue grass found there.

“The U.S. Open at Pinehurst was a fantastic thing,’’ Lawrence said, “because it showed the world what a golf course should look like and could look like. The best golf courses are the ones that look natural, as if they could be a piece of land that you found and started to play golf on.’’

It’s so true. That’s why Chicago-area golfers love fall golf, when the ground is firm and the ball is running fast. In the spring, when the rough seems ankle deep and fairways are soggy from incessant rain, the game feels like a slog.

Over the years, the word “links’’ has been over-used in the United States to describe virtually any course that lacks trees.

The true meaning of the word “links’’ stems from the linksland, the sandy-soil dunes that connect farmland and the sea in Britain and Ireland. This porous soil drains well, aiding the fast-and-firm conditions that make golf so quirky and delightful across the pond.

There are so many possibilities. You can use any club in your bag, including the putter, from 60 yards and in on many Scottish and Irish courses. A short hitter like me can enjoy the thrill of hitting a 260-yard drive bounding the fairway at Royal Dornoch. A low-running 3-wood can pinball its way onto a green at Kingsbarns from 230 yards, one of the rare moments when I reach a par-five in two.

It’s a shame so many Americans see the fescue and gorse, and the weather forecast, and decide not to give Scotland and Ireland a go.

But if American golf is moving back to nature for a variety of good reasons, that’s a very positive step.

Golf should be fun. And nothing gives golfers a better chance to have fun than “fast and firm.’’