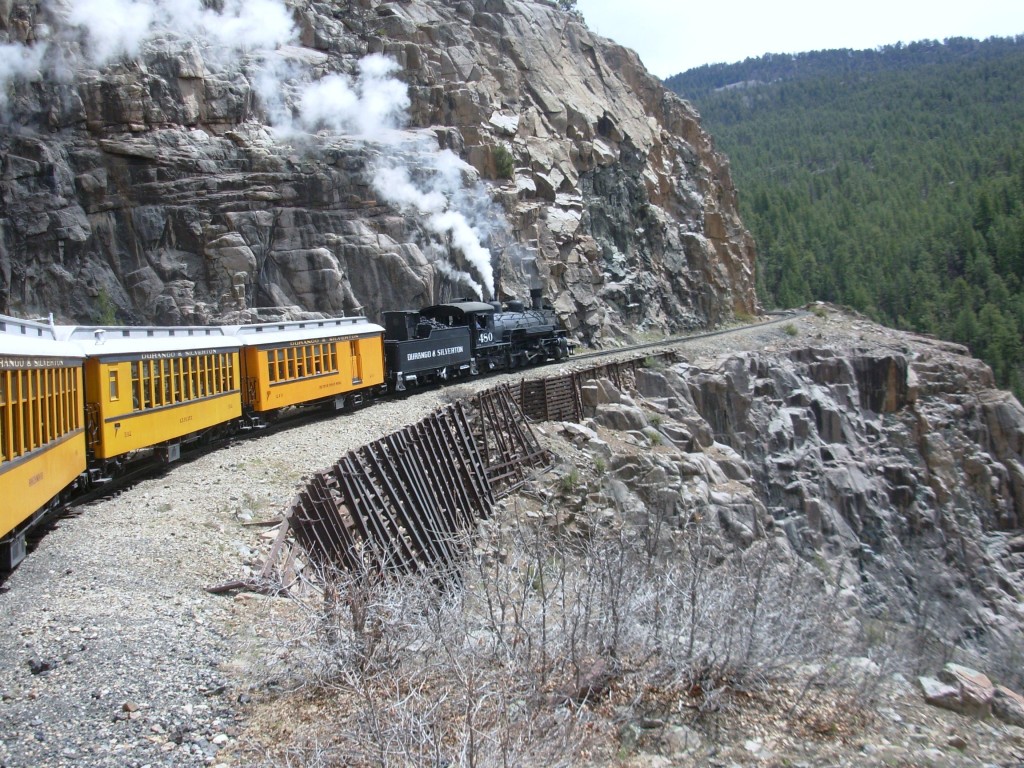 DURANGO, Colo.—I’ve always loved trains. They give meaning to the phrase, “Getting there is half the fun.’’ And you don’t have to take your shoes off.

I’ll never forget a childhood overnight train trip to Washington, D.C., marveling at the Shenandoah Valley in the early morning mist. Also etched in my mind is a trip across Switzerland, from Zurich to Zermatt, which felt like a rolling documentary of Swiss cities as well as Alps.Another rail trip that’s going on my list is a recent trip on the Durango & Silverton Narrow Gauge Railroad in southwestern Colorado.

From the mournful old-fashioned whistle on its classic steam engine to the stunning and precarious overlooks of the Animas River, it’s a journey through history as well as a scenic wonder.

The trip begins in Durango, which has evolved from a late-1800s mining boom town to a year-round vacation destination. An hour to the west lies Mesa Verde National Park, home to a mystical set of Native American cliff dwellings that were mysteriously abandoned after being built into the side of mountains 700 years ago.

An hour east of town is Pagosa Springs, with its remarkably relaxing natural sulfur-spring hot-tub soaks. I’m not going to make any undocumented claims, here but my golfer’s back felt much better after a day there. Even a cut on my finger seemed to heal faster.

And north of town is the Durango Mountain Resort, also known as Purgatory, a top-notch ski destination. In the warmer months, the area also abounds with outdoor activities, including river rafting, fly fishing and mountain biking, in many directions.Being too late for skiing and too early for rafting, our means of transportation was confined to the Durango & Silverton train, which makes its 45-mile trek between the two towns alongside the at-times roaring Animas River. The train runs daily most of the year and several times a week in most of the off-season, providing an up-close glimpse of mountain gorges, waterfalls, sheer cliffs, changes of season and whatever else Mother Nature has in mind.

When my wife and I arrived at the station, we found a well-restored building and attentive staff. The anticipation grew with the sounds of the steam engine being primed and several clusters of passenger cars standing on several sidings. As the engine chugged out and was hooked up, some members of the train crew stood ready to answer questions and accommodate photo requests.

The Durango & Silverton offers several seating options, from basic coach cars to open-air gondola cars that have cushioned seats facing outward to an old-fashioned parlor car that features comfortable tables and chairs with a full bar and an attendant.

On the advice of a friend, we booked the parlor car and pre-ordered a tamale lunch. While the gondola cars are excellent places to photograph the mountain and river scenes, soot from the steam engine can be an issue. And there’s plenty of time to stroll through the rest of the train, which includes a snack bar, and imagine how previous generations traveled. The thought of hundreds of steam engines throwing up black smoke and soot in Chicago’s rail heyday was hardly comforting, but that was a different time, pre-EPA. This narrow-gauge line—its rails are three feet apart, as opposed to 4-8-1/2-inch standard gauge—was built in 1881-82, when there was a big financial incentive to create reliable transportation in and out of the San Juan Mountain mining towns.

As the train chugged slowly out of Durango, we returned the waves of those gathered to watch the wooden yellow train cars rumble out of town behind the hard-working steam engine, which is well-equipped to deliver the horse-power needed to make the climb from Durango (elevation, 6,520 feet) to Silverton (elevation, 9,305 feet).

With a top speed of about 22 m.p.h., the train gives passengers ample opportunity to take in the scenery. As we climbed out of town, a majestic valley came into view, with colorful red sandstone rocks and rugged trees blending together over the Animas River.Continuing its climb, the train, pulled by a Baldwin-K36 class built in 1925, ascended through the trees. The curves became sharper, the train following tracks that had been placed on a man-made shelf that allowed it to cling to the side of the mountain.

To the left, passengers could easily reach out and touch the rocks. That posed problems for the teachers and chaperones of a group of young schoolchildren who were on our trip, but they were up to the task.The right side afforded jaw-dropping views of Animas River rapids in the gorge below. Sharp-eyed passengers were able to catch a couple of glimpses of bighorn sheep across the gorge. And there were several dramatic waterfalls, some of them partially frozen on this mid-spring day.In other words, the ride is a photographer’s delight, as evidenced by the camera people hanging out of the gondola car like gawkers peering out from a crowded tenement.

Our trip crescendoed on a stretch known as the High Line, which was cut into a sheer mountain wall at the cost of $100,000 per mile, a staggering number in 1882 dollars that gives an idea of how lucrative the mining boom was. At that point, the train slowed to a crawl. There were no complaints. This was not a trip about speed. It was virtually a ride about time travel, one that took us into the past, something airline flights don’t try to do.

Because it was early season, our journey reached its mid-point at Cascade Canyon, where the engineer used some Y-shaped track to turn the train around.In the high season, when the train proceeds on up to Silverton, many passengers opt for a bus/train combo, which brings them back to Durango by bus.

While we’re sorry our train didn’t chug all the way up to Silverton, that’s not all bad. Now we have an excuse to go back.