ST. ANDREWS, Scotland—As we drove out of town, the splendors of the quirky New Course still fresh, I was wondering about using one of our three St. Andrews days to play the parkland Duke’s Course with so many links beckoning.

This was especially true when we got lost on the way there, even though it was only 3.4 miles from the first tee of the Old Course.

But I had heard such good things about the course, and the views. And when we drove up, we weren’t disappointed.

There in the hills above St. Andrews was the Duke’s, widely considered one of the best parkland layouts in the United Kingdom.

It lives up to that billing. The Duke’s has wonderful terrain changes and majestic views of St. Andrews and the surrounding area—all in all, a great change of pace from the seaside links that are Scotland’s dominant style. 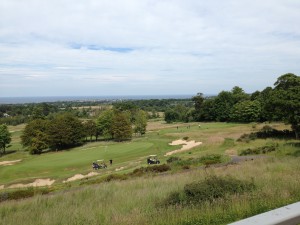 Do not adjust your laptop. That tilt shows seriously uphill No. 9 (foreground) and No. 18 at the Duke’s Course.

Opened in 1995, the Duke’s underwent an extensive renovation in 2006, after it was purchased by Herb Kohler, the Wisconsin (Whistling Straits, Blackwolf Run) golf visionary. It’s a companion to the Old Course Hotel, which Kohler also owns.

Originally designed by Peter Thomson, the five-time British Open champion from Australia, it was remodeled by Tim Liddy, a colleague of Pete Dye, architect of Whistling Straits and Blackwolf Run.

My friend, Ron, who had been having back problems, was excited to see “buggies,’’ as power carts are known across the pond, but they were all booked for the day. No big deal. When I’ve had back problems, I’ve found that carts were not a good thing. Better to walk and stay loose than to keep bending to sit down.

On the first tee, Ron smoked a drive. He then hit a solid fairway wood on the opening par-five and a short iron to give himself a tap-in par. I was doing my usual early scuffling, and managed to find some impossible fescue sitting atop a greenside bunker. We were off.

Although it’s a tree-lined layout that could easily fit in the Kettle Moraine region of Wisconsin, the terrain changes and firm ground at the Duke’s allow for some Scottish-style bumping and running on the downhill holes.

I was having my usual scatter-shot start—double, double, birdie, par, triple—when the golf course really got interesting. After a relatively flat opening stretch, we encountered the enchanting sixth hole.

This par-five provided the first eye-opening views of St. Andrews, from its church steeples to its Eden Estuary shore to all the linksland in between. 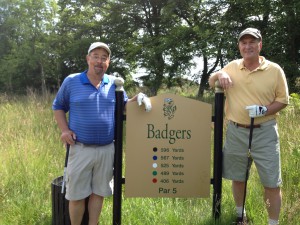 No. 6 is named “Badgers,’’ and as Wisconsin alums, Ron and I were pleased by that. Turns out there are badgers in Scotland as well as us Badgers.

The hole itself also is a treat. It has broad downhill fairway that slopes right to left, with three nasty bunkers on the left side that easily can catch bounding drives.

Somehow, Ron and I managed to stop just short of those bunkers, while my wife Liz, a strong driver who tends to push her tee shots, watch her drive hit the right side and bounce nicely into the middle.

I hit my second shot way right to dodge a pair of fairway bunkers, then watched it bounce nicely back to the left, close enough for a little pitch that dodged three nasty greenside bunkers and a two-putt par.

And so, on three of the first six holes, I was 1-under. On the other three, I was 7-over. But never mind. From No. 6, the Duke’s course went from interesting—to fascinating.

If this course were in proximity with its American cousins, the quartet of Kohler courses led by Whistling Straits outside Sheboygan, Wis., it would fit right in.

No. 7 was a downhill bomber par-four in which even a short hitter like me could chase one onto the green. Unfortunately, my approach bounded left into a massive bunker.

No. 8 was a daunting uphill par-three, into a cross-wind, no less. No. 9 was an uphill dogleg right that finished just below the terrace of the Dukes clubhouse.

After our round, we enjoyed pints on that terrace while taking in the view of St. Andrews and the struggles of golfers trying to dodge the nasty bunkers guarding the narrow table-top ninth green.

On No. 10, a dogleg par-four with an awkwardly sloping fairway and a cavernous greenside bunker, the adventure continued. The rest of the back nine was more of the same—one clever hole after another that either flowed delightfully downhill or ominously back uphill.

The 11th hole—a downwind, downhill par-five—allowed for an ego-swelling tee shot, which was right up Liz’s alley. No. 13, a short par four, also allowed a bomber tee shot. But the diagonal green, guarded by a nasty front-right bunker demanded caution.

What goes down must come up. And so, the closing holes, notably 15th and 18th, were brawny uphill par fours that were made even more difficult by an increasingly blustery wind. 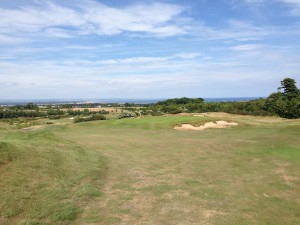 No. 13 is short, but good luck with that magnet-like sandtrap to right of green.

As we walked off the 18th green, we were pleased, but not finished. The walk up from both that green and No. 9 to the clubhouse would require three flights on an elevator, but of course there was no elevator.

We managed it, though. Knowing that there was a pint—and a spectacular view of St. Andrews at the top of the hill—made the climb easier.