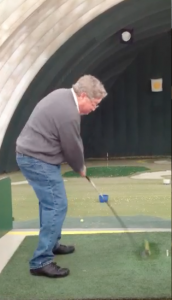 Why is this so difficult? The ball is just sitting there.

I used to think changing your golf swing was like learning to walk all over again.

I was wrong. After a couple of weeks of going at it, I’ve decided it’s more like learning to breathe in a different way.

I am making progress. My laid-off club, which was so wide-open that the clubhead wasn’t even on the screen, now shows up on the Trackman replays.

The trouble is, the clubhead is still so ridiculously wide-open that it looks like a pancake flipper rather than a weapon of golf destruction.

I look at it and I say, “How could this swing have won the Tee Party?’’ a really competitive member-guest at a country club in California? Even if my partner, an old college buddy Bob Bayer, did all the heavy lifting with his club-champion swing, my double-digit handicap turned pars into birdies. And those two birdies on the back nine the last day. . . 4-under on two holes is 4-under on two holes, no matter how lame the swing.

And that 9-1-1 run with my former Sun-Times colleague Brian Hewitt in the Illinois-Wisconsin Writer’s Cup, a media grudge match, wasn’t bad, either. No doubt, Brian was the rock, but my occasional sucker punch didn’t hurt.

But those successes were 15 or 20 years ago—and they were more about chipping and putting than greens in regulation.

I go through the drills with Joe. We start with a little half-swing, hard-chip with a full-finish. The idea is to generate clubhead speed by using the lower body; even this is a struggle because I am so used to my arms-and-momentum flailing. 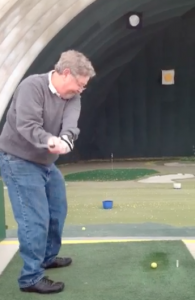 The step drill, in which I start with my feet together, and step into the shot with my left foot, like a baseball player, goes better.

But when Joe has me go on to normal full swings, it’s the same old stuff. A wildly bending, wrong-angled backswing that barely stays on the video screen, followed by an awkward downswing in which my “athleticism’’ closes the clubface enough at the last moment to produce the weak but playable result I am trying to put in the rear-view mirror.

A bad swing is a difficult habit to break.

Joe sighs, scratches his head, tries to ponder new ways to make me close the clubface, among other things.

“Try to hit the ball with the toe of the club,’’ he says.

Demonstrating, he shows me that he wants me to see if I can hit the ball with the end of the club, while the clubface is parallel to my body.

I try it, and the clubface is closed, but just barely.

The bottom line is, I need to keep doing the swing drills at home—and keep working on developing the flexibility to make the right moves

Joe has charged me with making swing after uncomfortable swing, so I am doing this at home. Uncomfortably.

To make the club even think about being square, my mind has to feel like it’s closed so tight that I actually will hit the ball on the end of the club.

I make these swings in our kitchen/great room area, which has high ceilings. They feel terrible. The clubhead is still open. It is not going fast. And my right hip is feeling tender from all my awkward efforts to use my lower body.

“Any interest in going to the indoor range?’’ I say one weekend morning to my wife, who’s reading the Sunday paper. She does not look up.

“I’ll take that as a no,’’ I say. I don’t blame her. We live in the city. The White Pines Golf Dome is in the suburbs. I move downstairs to the lower level, where my office and our home gym equipment are located, and pick up a 9-iron. 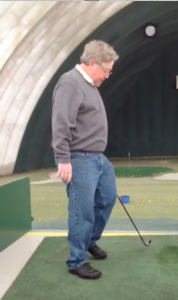 Now, swinging too hard—sorry, Joe, I still have thoughts like that—I let the club fly up and catch the ceiling. I look up to see a nice dent in the previously pristine drywall.

So we drive out to the White Pines Golf Dome, which is bustling as noon approaches on a Sunday. Very bustling. People are waiting for practice bays.

At least I’m not the only one who’s obsessed.

We spot our friend Mike Munro, who owns the dome, and chat until a spot opens up. I tell him how impressed I am that so many people want to drive through massive snowdrifts to work on their games—games they won’t be able to use for months, the way this winter is going.

We go upstairs and I take a few swings. Recalling Joe’s tips, a couple of them actually feel OK to me. My wife is taping them on the iPhone.

Encouraged, I try to build on the good swings by swinging harder. The whole exercise quickly blows up. I am swinging harder, but I am not finishing the swing by catching the raindrops. I am stopping—steering the ball.

Now I really am swinging harder, trying all manner of band-aids I have learned over the years. Strengthening my grip. Closing my stance. Taking the club back slower. Shorter.

“Don’t get discouraged,’’ Liz says, borrowing a line from Joe.

I wouldn’t say I’m discouraged, even though my facial expression says otherwise.

But I am disappointed. There’s no doubt about that. I try to remind myself of the difference.