Taming the Wolf definitely isn’t easy. The Wolfdancer Golf Club at the Hyatt Regency Lost Pines Resort and Spa, located near Bastrop, Texas and only 15 miles from the Austin Bergstrom International Airport, has one of the highest course rating in Texas at 76.1 from the tips at 7,205 yards. Of course, not many actually venture to those back tees, but it still has a 74.3 rating from the blue tees at 6,836 and a 71.6 from the whites at 6,314 where you will find most players. 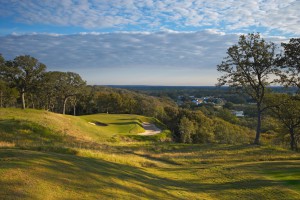 On land where the Tonkawa tribe once lived architect Arthur Hills, with an assist from Steve Forrest, masterfully crafted a challenging design that takes full advantage of the natural lay of the land and will definitely test even the game’s best.

Director of Golf Kelly O’Donnell admits that some golfers have told him Wolfdancer is the hardest course they have ever played, but the same players can’t wait to get back for another try, sometimes just following the “Tee It Forward” theme and moving up to shorter tees.

My cousin, Eldon Tarver, of Marble Falls, is one of the members of a Texas Golf Association rating team. He joined me recently and admitted it ranked in the top five of the hardest he had ever played. Neither of us came close to Taming the Wolf on our first try, with medal scores of 85 and higher. However, we had a great match the second time, sticking to the white markers. He made a 15-footer on No. 18 and I missed. That was the difference as I had an 80 and Eldon had an 81, right where a pair of seniors with 9 handicaps should be.

So while we did not tame the Wolf ourselves, we did witness San Antonio amateur John Pierce accomplish the feat with a two-under par 70 from the blues.

Jacque Cooper of Rockwall noted Wolfdancer was tough for women from the forward tees. “It’s challenging for low handicappers, but leaves a little wiggle room for higher handicappers,” she added. “The greens demand respect from every angle.”

You get to appreciate the beauty of the natural environment with no homes bordering the fairways as distractions as the course winds through three eco systems, starting out with four holes on rolling prairie land, then winding through a wooded ridge on the next eight holes before you finish the last six in a valley bordering the Colorado River with plenty of large Pecan trees. You do see 180-degree views of the remainder of the course and the Hyatt from the elevated 12th tee and see the resort again as you head to the 16th tee and then as you leave the 18th green. It’s easy to see why Wolfdancer received Certified Audubon Cooperative Sanctuary status.

What creates the difficulty? It’s not the tee shots since there is ample room. However, hitting the greens is another matter. First, you have to be able to adjust to some uneven lies in the fairways. Then the greens, which reminded me a little of the ones at Pinehurst Country Club No. 2, have false edges that tend to keep balls off. With certain pin positions, you have to be careful to avoid three putts on the fast greens, especially on No. 6.

Hills and Forrest did an excellent job of providing a variety of par 4s, mixing in some shorter ones that might appear as birdie holes when you look at the scorecard, especially from the whites at less than 300 yards. I even went for the green the first time on No. 7 from 260 yards, perhaps seeing a little red after a 7 on the previous par 3. I got on the front of the green, but the pin was on the back and I needed three putts. Looking back from the green, I told Eldon I probably wouldn’t try it again unless I was playing with a partner who was safely within wedge range out in the fairway. The risk isn’t worth it playing your own ball. I got within 20 yards of No. 11 both times, but even these bump and run shots weren’t easy and no birdies were recorded.

The par 3s demand accurate approaches with a variety of shots, ranging from a hybrid to a wedge on the downhill 12th, one of the most photographed holes in central Texas. The 6th also is not long, but the test here comes on the undulating green. Eldon hit his approach to three feet on the second day. I first thought my shot was inside his as I left the tee only to hear him say something about the ball was still moving. Sure enough, it finished 20 feet away. A putt from the fringe by another player rolled up close to the hole and finished behind my ball. The good news is that after seeing his putt I made my birdie putt, conceding Eldon’s short one, happy to just get a tie.

The par 5s on the front, Nos. 3 and 5 playing at around 600 from the tips, probably are true three-shot holes, but many golfers can get home or close to the greens on No. 14, if they get past the large Pecan tree at the corner of the dogleg and then avoid the water hazard. As Pierce proved, getting close to No. 18 also is possible. Players have two options with their second shots where the landing area is bisected by a ridge sprinkled with random bunkers—hit to the left and face a semi-blind approach or challenge the right side, leaving an easier short pitch unless the pin happens to be on the front as it did when we played the second time.

I didn’t realize it until taking a closer look at the scorecard, but each hole has a name with apt descriptions like Cascade for No. 6—there’s a waterfall to the left of the green–Top-of-the-World for No. 12—which offers that panoramic view– and Up the River for No. 18—where the holes runs parallel with the Colorado River.

With some high rough where your ball seemed to sink all the way down to the ground, I was glad for the second round that I added my SCOR 60-degree to my bag. After ending up next to a rock in a dry hazard, I took my penalty and dropped in this rough about 20 yards from the pin, cut on that side of the green. Eldon was safely on the green putting for birdie. I thought I had no chance; so I just opened the blade and took a swipe like I would do in the bunker. The ball shot high into the air, landed on the fringe and rolled into the hole. I couldn’t see what happened, but the other three players did.

The Hyatt features guest rooms with many luxury amenities, including a full service spa, and a water park with a 1,000-foot waterslide–full of families on the days we were there. There are also plenty of outdoor activities like horseback riding, kayaking, rafting and hiking along 16 miles of trails available for guests on the 405-acre former cattle ranch, adjoining the 1,100-acre McKinney Roughs Nature Park.

O’Donnell reminds everyone you do not have to stay at the resort to play, as the golf course is open to the public.